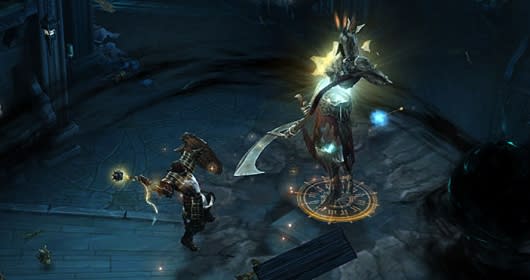 If you're a gamer in China waiting for Diablo III, you have undoubtedly been waiting for a very long time. Given the game's subject matter and the strict censorship policies of the government, it's not a surprise that it's taken a while to get moving. At long last there is a light at the end of the tunnel, however, as distributor Netease has announced that the censorship issues are finally resolved and the game is free to begin technical testing.

The testing phase will begin after the lunar new year is celebrated later this month. While the exact nature of graphical changes has not been disclosed, Netease stresses that the game will still be cool to look at, which could mean... almost anything, really. Still, at this point most of the players who have long waited for the game will just be happy to see it finally available within China.
In this article: action-rpg, battlenet, blizzard, blizzard-entertainment, cash-shop, censorship, changes, china, chinese, content-censorship, d3, diablo, diablo-2, diablo-3, diablo-ii, diablo-iii, fantasy, gothic-fantasy, graphic, graphical-changes, graphics, localization, multiplayer, news, news-items, online-multiplayer, roguelike, rpg
All products recommended by Engadget are selected by our editorial team, independent of our parent company. Some of our stories include affiliate links. If you buy something through one of these links, we may earn an affiliate commission.