The iconic Renault 5 is coming back as an EV 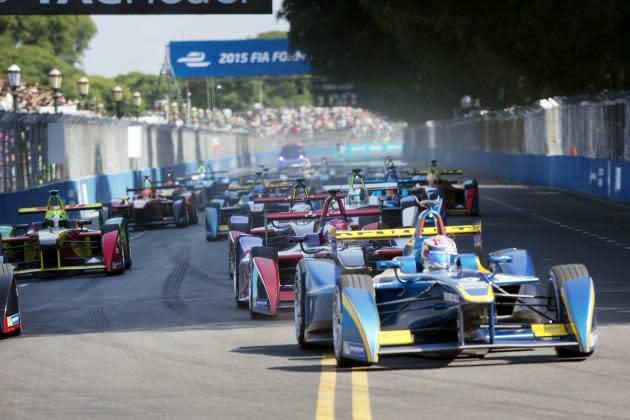 The inaugural Formula E season is well underway, but already organisers are preparing for the next championship. At the moment, all 10 teams are using identical electric vehicles (EVs), but the plan is to let them tinker with the design from the 2015/16 season. Now, thanks to the Federation Internationale de l'Automobile (FIA), we know the eight manufacturers that'll be contributing custom parts later this year: ABT Sportsline, Andretti, Mahindra, Motomatica, NEXTEV TCR, Renault Sport, Venturi Automobilesa and Virgin Racing Engineering.

Once the 2014/15 championship wraps up in London, manufacturers will be able to experiment with the car's powertrain, which includes the e-motor, inverter, gearbox and cooling system. The crews are being restricted to a specific portion of the vehicle, but that's intentional: the FIA wants them to focus on technologies that will benefit the larger EV industry, rather than car aerodynamics. In the third season, those freedoms will be extended to the batteries, in the hope that drivers will be able to use a single car for an entire race from year five. Notably, all manufacturers must also be willing to sell their components to any competing team. The FIA will set a maximum price so the latest parts are affordable; it could lead to short-lived advantages on the track, but the FIA hopes it will accelerate new EV breakthroughs that can be passed on to consumer vehicles.

Update: The FIA has provided clarification as to how the manufacturers will be involved in the next championship. They won't be the only groups fielding drivers; it's now been confirmed that 10 teams will be competing, much like the current season. The piece has been edited to reflect this new information.

In this article: EV, FiaFormulaE, fiat, formula e, race, Racing
All products recommended by Engadget are selected by our editorial team, independent of our parent company. Some of our stories include affiliate links. If you buy something through one of these links, we may earn an affiliate commission.