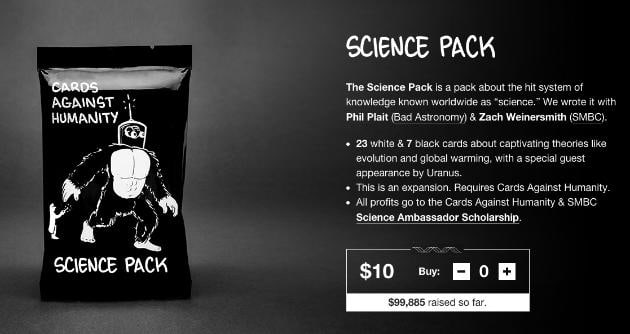 Cards Against Humanity, the naughty fill-in-the-blank card game, today launched the $10 Science Pack, an expansion offering 30 cards written in collaboration with Bad Astronomer Phil Plait and Saturday Morning Breakfast Cereal creator Zach Weinersmith. But that's not the coolest part: All proceeds raised by the Science Pack will be funneled into the Cards Against Humanity and SMBC Science Ambassador Scholarship, which offers full tuition coverage to women seeking undergraduate degrees in science, tech, engineering and mathematics. Applications will go live soon for the fall 2016 school year, and each one will be reviewed by a panel of more than 40 women working in STEM fields, including at NASA's Jet Propulsion Laboratory, Harvard Medical School and the Smithsonian Institution.

"We desperately need diversity in science because the alternative makes no sense," scholarship board member Veronica Berns, PhD, says in a press release. "So often girls are told in both overt and subtle ways that they aren't able to be good at math and science. With this scholarship, I'm excited to get to tell a passionate girl out there, 'Yes! What you are doing and dreaming is really great, and here's some help to get you where you want to go.'"

The Science Pack was already in the works in November, when creators showed it off at the Bay Area Science Festival. Notable examples of science cards include the prompt, "Today on Mythbusters, we find out how long _____ can withstand _____ ," and possible answer cards, "Uranus" and "The quiet majesty of the sea turtle." It sounds like a great expansion pack, folks.

In America, women make up just 12 percent of engineers, and only 26 percent of the computing field.

"We knew from the outset that we wanted sales of the science pack to go to a science-related non-profit," Cards Against Humanity co-creator Max Temkin tells Engadget. "We did some preliminary research and didn't find any organizations that jumped out at us. Eventually we decided that with the funding we expected, it would have the greatest impact to just fund a few peoples' college education. Targeting the scholarship at women who want to go into STEM just came from continuing to think about how our limited funding could have the greatest impact."

Women are largely underrepresented in STEM fields -- in America, women make up just 12 percent of engineers, and only 26 percent of the professional computing field, down from 35 percent in 1990, according to the American Association of University Women. NPR recently dove into the shifts in society and advertising that led women to leave these industries, and President Barack Obama has made diversity in STEM a priority for the White House.

The Cards Against Humanity Science Pack went on sale on Monday, and already it's raised triple-digit numbers for the scholarship. For those interested in applying, here are some of the fine details: full tuition coverage is available for up to four years, applicants must be in high school or college, and they "must identify as women in a way that's significant to them," according to the press release. Sign up to be notified when applications go live right here, and buy the Science Pack here.

"Cards Against Humanity has a wide reach online, and we're anticipating a huge volume of applications," says Jenn Bane, Cards Against Humanity communications manager and project manager of the Science Ambassador Scholarship. "Our hope is that this scholarship makes a tremendous impact in someone's life, and creates more visibility for women working in science."

In this article: CardsAgainstHumanity, scholarship, scholarships, ScienceAmbassadorScholarship, stem, women
All products recommended by Engadget are selected by our editorial team, independent of our parent company. Some of our stories include affiliate links. If you buy something through one of these links, we may earn an affiliate commission.