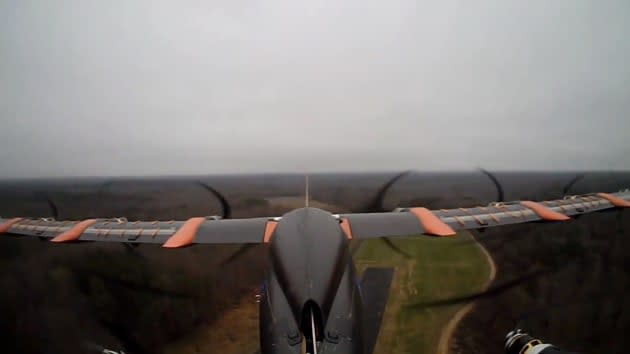 NASA's ten-engine UAV, dubbed the Greased Lightning (GL-10), recently showed off a slick new trick in the skies over Hampton, Virginia. The drone, which is under development by a team at the Langley Research Center, had already passed its initial hovering tests last August; but that was the easy part. As the long and miserable development of the V-22 Osprey has shown, the real challenge is switching over from hover mode to conventional forward flight without the vehicle falling out of the sky. But on Thursday, NASA's battery-powered tilt-rotor aircraft successfully did just that.

"During the flight tests we successfully transitioned from hover to wing-borne flight like a conventional airplane then back to hover again. So far we have done this on five flights," aerospace engineer Bill Fredericks said in a statement. "We were ecstatic. Now we're working on our second goal -- to demonstrate that this concept is four times more aerodynamically efficient in cruise than a helicopter." Should the GL-10 prove its aerodynamic ability, the Langley team hopes to spin the technology off into a number of commercial applications including small package delivery (put your hand down, Amazon) or industrial/agricultural surveillance. And as Fredericks continued, "a scaled up version--much larger than what we are testing now--would make also a great one to four person size personal air vehicle."

In this article: electric, GreasedLightning, Langley, LangleyResearchCenter, NASA, UAV
All products recommended by Engadget are selected by our editorial team, independent of our parent company. Some of our stories include affiliate links. If you buy something through one of these links, we may earn an affiliate commission.