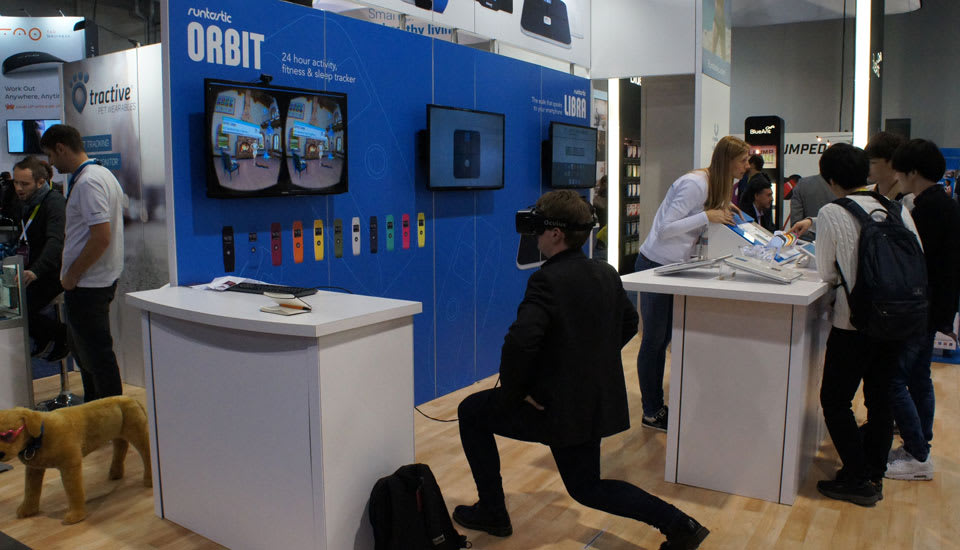 One of the more experimental things that Runtastic has on hand at its booth here at CES is a demonstration of a workout trainer that uses Oculus Rift to make exercise a little less boring. Unfortunately, at this superbly early point, it's hardly the most refined or elegant system to use. Still, if you're struggling to picture what it's like to use a virtual reality device as a personal trainer, then you've come to the right place.

It's fair to say up front that Runtastic has no current plans of announcing this as a product, since the Rift itself remains in development mode. In fact, the company would only countenance releasing a software service when the VR headset lost a lot of weight, as well as those wires that tether it to a nearby PC. With that in mind...

You begin in a black void, with a female avatar of a personal trainer staring back at you, offering you three location options. Once selected (I picked a veranda out on the shores of Lake Como), you then begin your workout. Essentially, this is the same as if you were watching an old-school workout video, with you copying the motions of the person in front of you. There's no interactivity here, and the instructor is oblivious to your failings or successes. Thankfully, a camera mounted above the TV enables the hardware to track some of your movement, and a guide icon in the top-right of my view turns green when I dip low enough each time I do a lunge.

When I'm bored of the veranda, I turn my head to a specific point on the left, and after holding my gaze for three or four seconds, we're transported into the lounge of a spacious New England McMansion where the process begins again. After a while, it's hard not to become self-conscious about behaving like this, and it's not as if the experience is really that much better with a VR device strapped to my face. The Rift hardware is pretty bulky, and I'm constantly moderating my movement in order to not rip the cable out of the PC, or smack my fellow trade show goers. In short: I feel like a stupid prick.

Admittedly, the company did say that this wasn't intended to replace other workouts, but could be used as a supplementary device when the weather is bad. The fact that in Asian markets, a lot more workouts take place in the home was also brought up, suggesting that purely the idea of transporting a person from their living room to someone else's is benefit enough. I don't want to condemn this system, since we're still at least a year away from any sort of finished product being available, but it's going to need a lot of refinement before I'm convinced that this is the future of fitness.

In this article: CES2015, Fitness, hands-on, Oculus Rift, Runtastic, video, Workout
All products recommended by Engadget are selected by our editorial team, independent of our parent company. Some of our stories include affiliate links. If you buy something through one of these links, we may earn an affiliate commission.