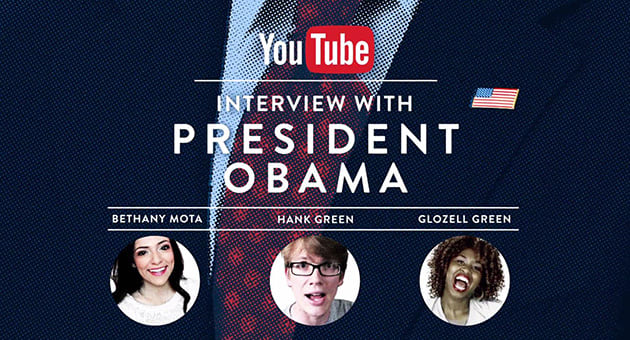 Just a few days after President Barack Obama gives his penultimate State of the Union address he'll be taking to the web to answer questions from a trio of big-time YouTube stars. Bethany Mota, GloZell, and Hank Green will sit down with the President in the White House to ask him questions about the issues that matter most to their audience -- mainly tech-savvy millennials. While the three will certainly have their own questions, a good portion of the queries will come directly from you, the American people. You can submit questions via the usual social channels using the #YouTubeAsksObama hashtag.

If you're over 25, you might not be very familiar with the three lucky YouTubers getting a chance to sit down with the leader of the free world. Bethany Mota is a 19-year-old fashion vlogger with eight million passionate followers who have helped her become one of several personalities frequently featured in those YouTube commercials you keep seeing. GloZell, on the other hand, is a comedian who describes herself as the "queen of YouTube." And lastly there's Hank Green, one of the Vlog Brothers and host of several Crash Course lessons on science.

The State of the Union begins Tuesday, January 20th at 9PM ET. The trio of YouTubers will follow up with an interview two days later, on Thursday, January 22nd.

Hey so *nervous cough* I'm interviewing President Obama at the @Whitehouse next week. Any questions you want I should ask? #YouTubeAsksObama

Source: YouTube Blog
In this article: Barack Obama, BarackObama, Bethany Mota, glozell, hank green, interview, white house, youtube
All products recommended by Engadget are selected by our editorial team, independent of our parent company. Some of our stories include affiliate links. If you buy something through one of these links, we may earn an affiliate commission.