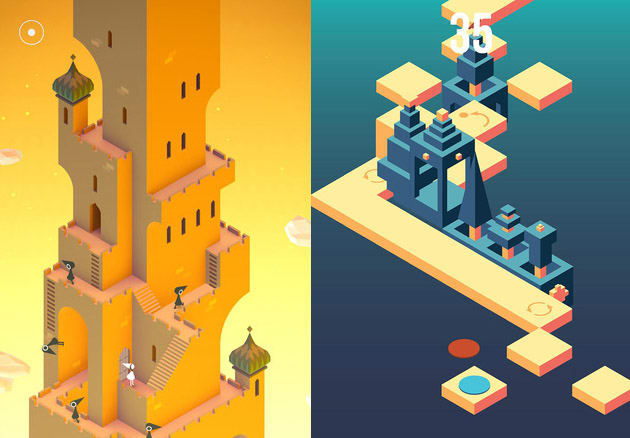 Did you play Monument Valley (above left), the gorgeous perspective-based puzzler from last year? It costs $4 on Google Play / iTunes, and is one of 2014's best games. And now you can get it for free. Sort of. You see, Ketchapp, the studio behind Threes! knockoff 2048 is at it again. With Skyward (above right), the developer's created a game that bears more than a passing resemblance to ustwo Studio's Apple Design Award winner. Whereas Monument Valley is a relaxing, almost Zen-like experience that's more about logic puzzles than twitch reactions, Skyward is a shallow attempt at disguising a tired Flappy Bird clone by wrapping it in pastel colors and M.C. Escher-like aesthetics. Oh, and it's full of obtrusive ads for retirement planning and compact cars -- junk that's thankfully missing from Monument Valley.

A video comparing the similarities between Monument Valley and Skyward

The reality is plenty of people will download the knockoff because it doesn't cost anything, while Monument Valley will set them back less than a venti latte from Starbucks. Its players won't get the experience that ustwo spent countless hours creating, but Ketchapp will rake in money from the aforementioned advertisements and that revenue will fund the next creatively bankrupt veneer of a game that capitalizes on someone else's hard work. The concept of "cloning" isn't new, but it's an especially persistent issue in the world of mobile games.

It isn't just Ketchapp that's guilty of doing this, of course. A quick glance through both Apple's App Store and Google Play reveals that the developer has plenty of company. Take Threes!, for example. On iPad alone, there are over a dozen free clones, and, ironically, even clones of 2048 (Doge and Kim Kardashian having starring roles in a few) within the first several scrolls. Same goes for Flappy Bird. Then there's Gameloft that's perhaps best known for its Call of Duty and Grand Theft Auto "homages."

You might be asking how this really affects you as a person playing games on your phone. The problem is that the original teams that laid the creative groundwork are getting ripped off by carrion vultures quick to cash in on whatever's popular at the moment. As Rami Ismail of Ridiculous Fishing (also cloned) developer Vlambeer notes, unlike other intellectual properties, game designs can't be patented. Meaning, it's legal to crib someone else's game wholesale. Where those methods stand in terms of ethics and morality is another matter entirely.

A comparison video for Threes! against 2048

Big-budget game developers sidestep this with non-disclosure agreements and by not revealing their game until it's close to launch, thus forcing any would-be cloners to play a long game of catch-up. Independent and mobile developers often can't afford this perceived luxury, while less-than-scrupulous developers sit waiting in the wings to craft their cheap copies. This can put financial and emotional strains on the originators, and can even push them out of the game industry entirely.

How's that? Many mobile studios are comprised of incredibly small teams that are often in precarious financial positions to start. Any time or money spent doing something aside from developing a game (like pursuing legal action) is essentially taking food off the table for them.

Anything that resembles their game will likely end up next to it on an app marketplace, and trying something out for "free" is hard for just about anyone to pass up. It isn't until after the app's opened, ad revenue's collected and the player's left dissatisfied that they'll maybe try the real McCoy. That is, if the kirfed version didn't sour their taste for good. Honest developers thrive on lasting relationships and their reputation; the same likely can't be said for cloners.

It isn't all dark skies ahead, though: quality does get recognized. Ustwo recently announced that Monument Valley generated almost $6 million in revenue by the end of last year. Will Ketchapp be able to claim the same in as many months? That remains to be seen, but the enticing price point of zero dollars certainly doesn't hurt.

Source: Skyward (iTunes), Monument Valley (iTunes), Monument Valley (Google Play)
In this article: android, apple, Clones, gaming, google, hdpostcross, IOS, ketchapp, kirf, mobilepostcross, MonumentValley, skyward, threes, ustwostudio
All products recommended by Engadget are selected by our editorial team, independent of our parent company. Some of our stories include affiliate links. If you buy something through one of these links, we may earn an affiliate commission.