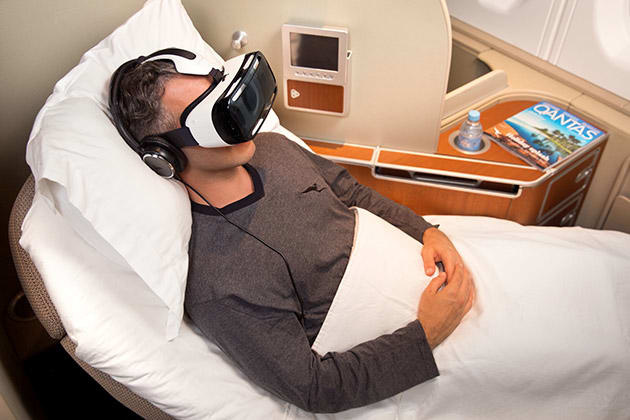 Offering iPads as in-flight entertainment systems is so 2014. Australian carrier Qantas will soon welcome a new breed of gadget onboard -- the Samsung Gear VR, along with a Galaxy Note 4 to power it. The phone's loaded with a special app that shows you 360-degree views of the carrier's first-class lounges and even a virtual reality boat ride. You can also use it to watch a movie, but unfortunately, if you want to marathon House of Cards, you'll have to use your own laptop or tablet for that. See, the bad news is that there will be a limited number of Gear VRs available, and it's not accessible to everyone flying Qantas: only folks in Business Class aboard an Airbus A380 going from LA to Sydney or from Melbourne to LA can borrow one. Even then, they're expected to use it only for a limited time, so other people can take their turn.

According to Gizmodo Australia, Qantas is providing two units each for the Mebourne and Sydney first-class lounges, four for inbound flights from LA and another four for outgoing flights to the city. The lounges will be stocked with the units as soon as mid-February, whereas the planes themselves won't be offering the device until mid-March. If you're just looking to experience using the virtual reality headset, though, it might be wiser to just buy the $200 Gear VR and the $700 phone to power it, as each top-tier round-trip ticket for those Qantas flights cost roughly 20 grand.

Via: Gizmodo, TheNextWeb
Source: Qantas
In this article: airplane, qantas, samsung, samsunggearvr, VirtualReality
All products recommended by Engadget are selected by our editorial team, independent of our parent company. Some of our stories include affiliate links. If you buy something through one of these links, we may earn an affiliate commission.