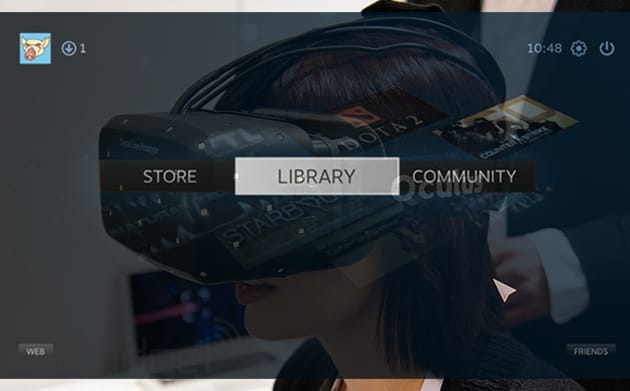 Valve -- the company behind Portal, Team Fortress 2 and the widely-used game distribution hub Steam -- will show off its own virtual reality hardware, "SteamVR," at next week's Game Developers Conference in San Francisco. This comes despite Valve's previous insistence that it had no plans to release any such hardware (we had our doubts about that anyway, after Valve held virtual reality demos at Steam Dev Days in January 2014). Developers who got their hands on the company's early VR experiments were impressed by their holodeck-levels of immersion, but the tech was reportedly very rough and required a full-room setup to completely function.

Additionally, it looks like Valve is making its own version of a "Steam Machine" -- the PC gaming initiative aimed at bringing PC gaming into the living room.

Are you a developer or publisher interested in experiencing the new SteamVR hardware? http://t.co/6mlWtbwjQY

Today's announcement contradicts what Valve has said about producing its own hardware all along, from virtual reality headsets to the Steam Machines initiative. Well, kind of -- the company "never ruled out" making its own Steam Machine, but also never announced any intentions to do so either.

Valve's original plan, first announced back in September 2013, was to compete with gaming consoles by licensing its own Linux-based operating system, SteamOS, to PC manufacturers. Those consoles were meant to be sold in a package with the Steam Controller; that may still be the case, despite a handful of the original hardware partners pushing to retail without Valve. The company expects Steam Machines to launch this year.

Source: Steam, SteamVR (Twitter)
In this article: GDC, gdc2015, hdpostcross, steam, steammachines, steamvr, valve
All products recommended by Engadget are selected by our editorial team, independent of our parent company. Some of our stories include affiliate links. If you buy something through one of these links, we may earn an affiliate commission.