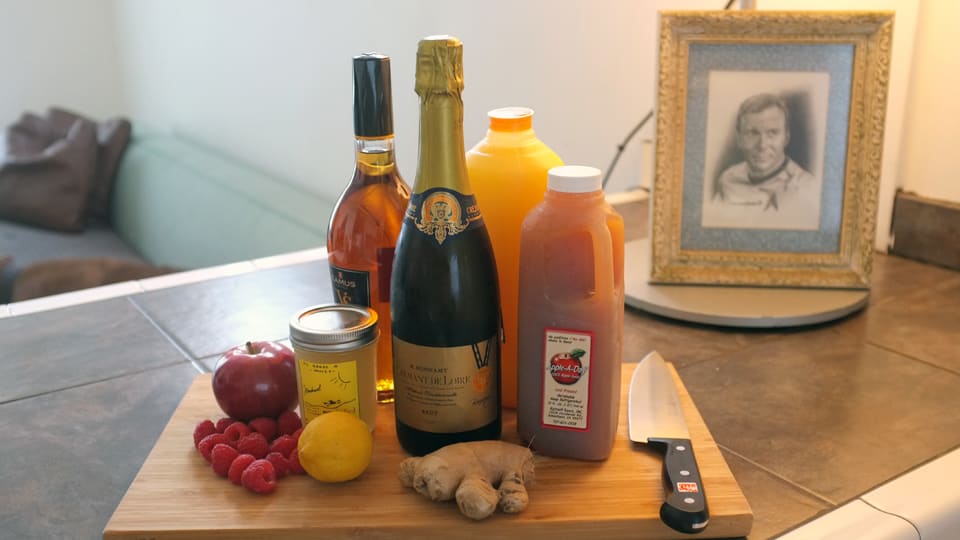 Before taking the helm at Vogue, where she laid the groundwork for the Devil to wear Prada, Diana Vreeland wrote a series of columns for Harper's Bazaar called "Why Don't You?" In a sort of goop for the 20th century, she would goad the super rich into ridiculous feats of capitalism.

"Why don't you rinse your blond child's hair in dead champagne to keep it gold, as they do in France?" she'd ask. Or, "Have your bed made in China -- the most beautiful bed imaginable, the head board and spread of yellow satin embroidered in butterflies, alighting and flying, in every size and in exquisite colors?"

Watson seemed to be channeling Ms. Vreeland in Cognitive Cooking, a collaboration between IBM's supercomputer and a group of humans at the Institute of Culinary Education (ICE). "Why don't you make an old-fashioned with a splash of chicken broth and a slice of grilled chicken for garnish?" it inquired. And in the spirit of excess we did just that.

On a Wednesday night in April, I brought together a group of Engadget editors and a couple of my favorite drunks to find out what happens when you trust your guts to the circuitry of one of the world's smartest machines. Cognitive Cooking contains nine different cocktails, four of which skew on the meaty side. They include "Hoof-n-Honey Ale," an intricate beer mixture of India pale ale, peaches, veal stock and grilled beef topped with a burgundy foam; the very literal "Shrimp Cocktail," which combines dry vermouth, Cointreau, lemon juice, bay leaves and Cajun-spiced grilled shrimp; and the Corn in the Coop, a fowl interpretation of the classic old-fashioned. In an effort to save our team from alcohol poisoning and our stomachs from turning, I selected a series of five cocktails, only one of which had a carnivorous twist.

I had each of my guests take tasting notes over the course of the evening and these are the results. 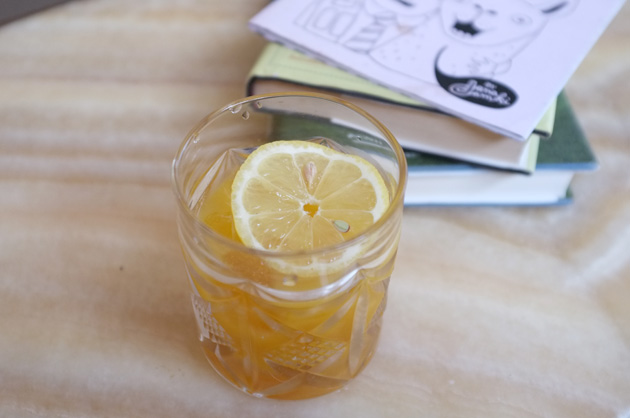 In the foreword to this recipe, James Briscione, the director of culinary development at ICE, describes the unique challenge of combining Watson's selections for this particular libation. As he points out, "With an ample amount of fruit ingredients, I had to create a cocktail that didn't feel like a smoothie." After a period of experimentation, Briscione came up with a four-hour process that turned the fruits' starches into sugars. Lucky for us, he then discovered bottled banana juice. The closest we could find was a bottle of expired Looza banana nectar, but I concealed that information and crossed my fingers in order not to taint the opinions of our taste testers. While the expiration date turned out not to be an issue, the nectar's thickness did lend itself to the smoothie comparisons Briscione was looking to avoid. Oops! 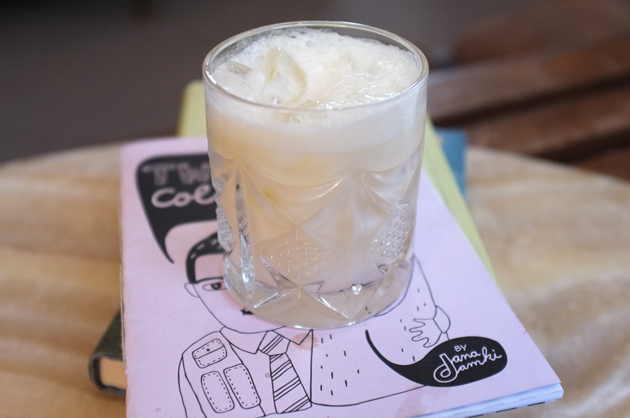 Perhaps the least imaginative of the bunch in both inspiration and execution. Florian Pinel, senior software engineer for IBM's Watson Group, even admits to its predictability: "Given IBM's fondness for the color blue, it was only a matter of time before someone asked Chef Watson to create a blue cocktail." The resulting cocktail was unsurprisingly uninspired. Unfortunately, neither my neighborhood liquor store, nor my regular craft bottle shop carried blue curacao, so we ended up with more of an Off-white Caribbean Hurricane. 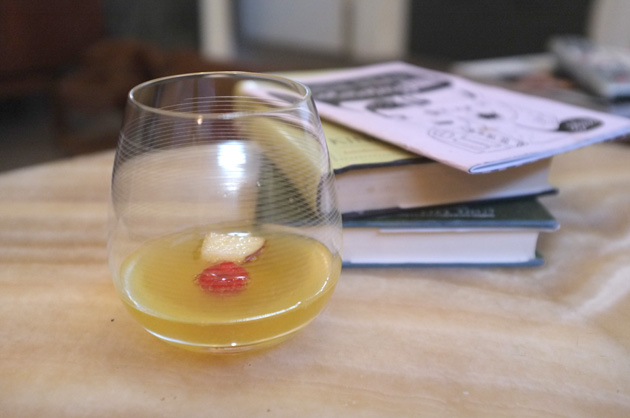 Of all the drinks we tested, this was far and away the biggest crowd-pleaser. Everyone agreed the French Champagne Punch, a close cousin of the French 75, "based on autumnal flavors" proved that Watson is capable of making a gimmick-free drink. With all of the references to brunch made by my guests, it also proved that I work with a bunch of daytime drunks. I failed to include the OJ in the first batch, and would recommend leaving it out as it really doesn't add much. 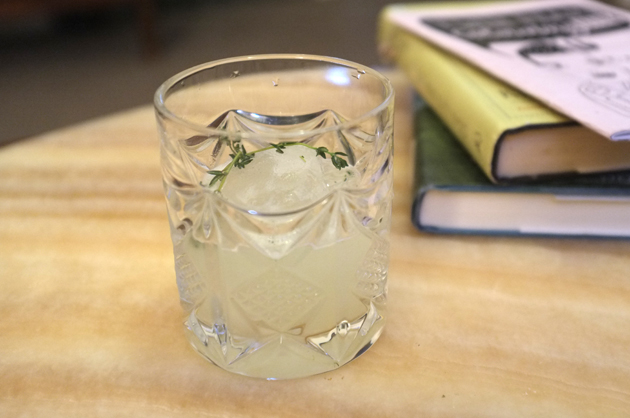 This is where things start getting weird. The foreword to the recipe describes this rather pungent drink as "both casual and elegant, making it perfect for any event, from a summer afternoon cookout to a formal evening dinner party." While not all of our taste testers found it to be the absolute worst thing they'd ever tasted, we could all agree that it's definitely not "perfect for any event." In fact, outside of a sushi dinner, there aren't a whole lot of places where I can see this drink fitting in. That said, if you're in to experimental indulgences, it could be worth at least a sip. I, unfortunately, decided to take it in one big gulp and suffered the consequences. From a bartender's perspective, this was by far the least complicated of the set, with only four ingredients.

Selected Tasting Notes
Michael: Good for one, but not multiple drinks. ... interestingly tasty.
Christopher: Tasty! Do not recommend drinking as a shot. ... I don't feel so good.
Joseph: I never trust cocktails that come with sprigs. I'm not fucking with this one. I feel like it'll curdle the contents of my stomach.

Corn in the Coop 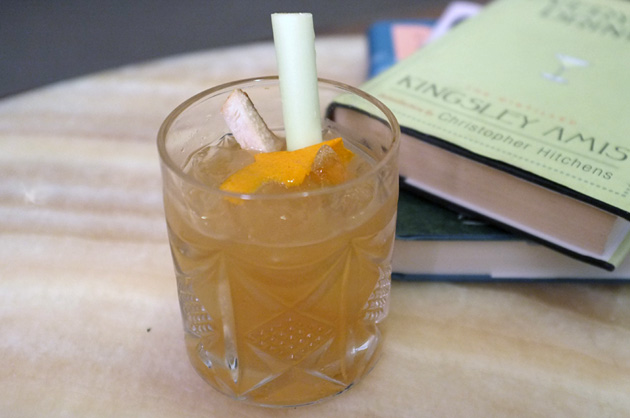 Meat cocktails are nothing new. Many people swear by Clamato in their Bloody Marys and swine-infused drinks are practically de rigueur in the craft cocktail scene. I recently encountered a pickled pig's tongue Gibson, for example. But in all of my research on the topic, I failed to find another drink that centered on chicken. The Corn in the Coop, which combines ginger, apple juice and, yes, chicken stock to update the traditional old-fashioned, was by far the most polarizing cocktail on our list. Whether the instinct was to spit it out immediately or go in for another sip, as you can see from the tasting notes, we were a house divided.

In its latest iteration as chef and mixologist, Watson is like the fabled Honeywell Kitchen Computer, a gimmicky, inaccessible, but intriguing culinary companion. As such, it should come as no surprise that the cocktails it created (with the aid of some human helpers) were likewise gimmicky and inaccessible. As a mixologist, Watson is like Tom Cruise in Cocktail, which is to say, it's a bit of a show-off. But, that is the essence of Cognitive Cooking. Like so many of IBM's stunts of late, creating a cookbook is just another way to show off the power and possibility inside its supercomputer.

1. In a mixing glass half-ﬁlled with ice, add all of the ingredients. Stir to chill thoroughly.

2. Strain into a rocks glass ﬁlled with fresh ice. Express an orange peel over the top. Garnish with expressed peel, a stalk of lemongrass and grilled chicken.

Pro notes and tips:
• Cut the orange peel with as little pith (white) as possible to avoid adding bitter oils to the drink.
• To express added flavor from the peel, hold it between both thumbs and forefingers with the orange zest side facing the drink, and squeeze it quickly to distribute the essential oils over the surface of the drink.
In this article: chicken old fashioned, cocktails, CognitiveComputing, cognitivecooking, cookbook, cookingwithwatson, IBM, old fashioned, recipes, SuperComputer, Watson
All products recommended by Engadget are selected by our editorial team, independent of our parent company. Some of our stories include affiliate links. If you buy something through one of these links, we may earn an affiliate commission.