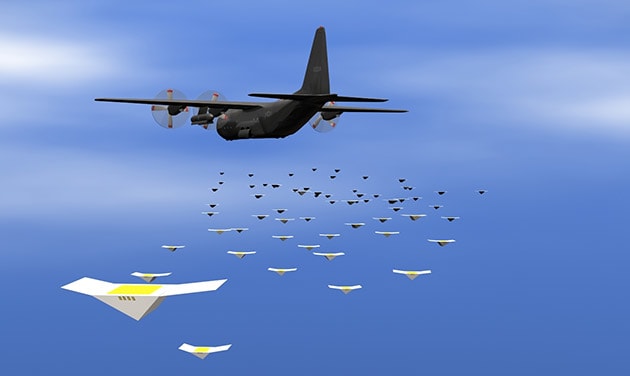 The Navy's Cicada drone has reemerged looking smaller than ever. Navy scientists have been developing the tiny smart glider since 2006 and even performed a flight test back in 2011. This newest iteration, which has been presented at the Department of Defense's "Lab Day" last week, is the smallest one yet and can fit in the palm of your hand. The US Navy has always envisioned the Cicada drone, formally named Covert Autonomous Disposable Aircraft -- a completely different project from the Navy's LOCUST drones -- to be tiny, low-cost and ultimately disposable. Like the insect, it was designed to fly in swarms and do its job until it (or, technically, its battery) dies. Despite looking like an innocuous paper/plastic plane, it's loaded with sensors -- Agence France-Presse even calls it a "phone with wings."

During its flight test back in 2011, it had sensors that could monitor the weather, temperature, humidity and air pressure. But it can also be outfitted with microphones and vibration sensors to listen in on enemy conversation and to detect if vehicles are passing roads where the enemies come from, respectively. Cicada drones have no engines or propeller systems, but they can fly (in silence) for 46 miles per hour after being tossed out of plane or a balloon. Each one's programmed with GPS coordinates, which it seeks while gliding toward the ground.

It cost the Navy a grand to build the current prototype, but the agency's engineers said it would only cost around $250 a piece to mass produce the drones. Due to the gliders' ability to work covertly, just about every government branch expressed an interest in them, according to AFP. And yes, that includes "some intelligence agencies."

Via: Ars Technica
Source: AFP, Naval Research Laboratory
Coverage: Naval Research Laboratory
In this article: cicada, drone, military, NavalResearchLaboratory, navy
All products recommended by Engadget are selected by our editorial team, independent of our parent company. Some of our stories include affiliate links. If you buy something through one of these links, we may earn an affiliate commission.