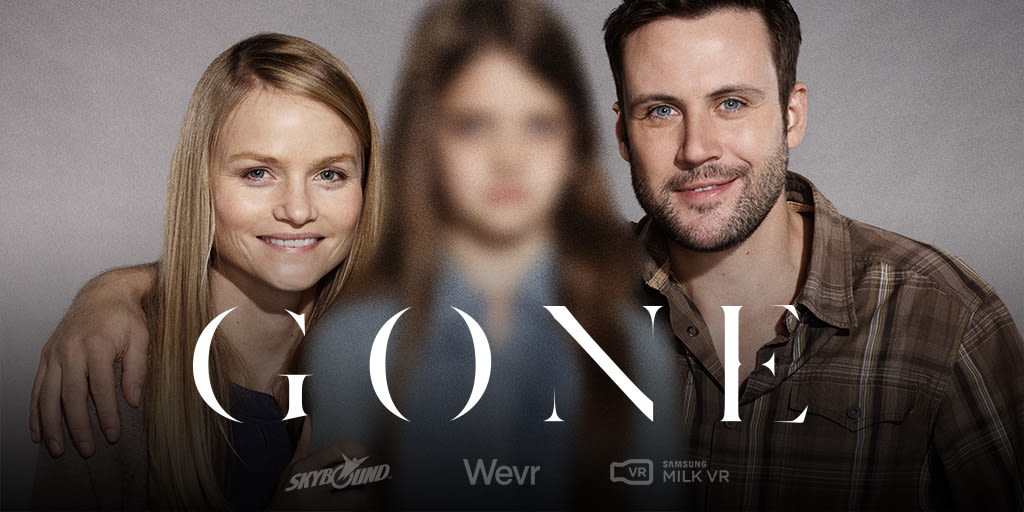 While playing games and watching 360-degree videos in virtual reality is fun, the medium is so powerfully immersive that it seems to beg for something more compelling; something that goes beyond just VR versions of existing content. That's the idea behind Gone, a recent collaboration between Samsung and Skybound Entertainment -- the production company behind the Walking Dead TV series -- that's described as a serialized virtual reality thriller. After a glimpse at the first episode and a chat with a few people behind the scenes of the project, I can say that it's a piece of content that is absolutely unique to VR, making me more intrigued than ever at VR's narrative possibilities.

Gone is an interactive story about a daughter who mysteriously goes missing in broad daylight. It essentially lets you, the audience, view the tale through multiple perspectives, inviting you to solve the mystery along with the show's characters. No, it isn't a game or a Choose-Your-Own-Adventure -- you don't need to solve clues or make decisions in order to progress through the narrative. But offering these different points of view lets you feel as if you're right there in the scene, thus gaining additional insight into just where little nine-year-old Emilia Clover went.

The episodes are broken down into five to six minute chunks and are entirely shot in 360-degree view, so you have to turn your head all the way around to get a glimpse of everything that's going on. As the clip progresses, you'll notice glowing "hotspots" peppered throughout a scene. If you tap at the VR headset's controls while staring at one of these spots, you'll be brought into an alternate point of view of the same exact scene. So, for example, in the first episode, I could view the playground from both the mother's perspective as she sits on the bench, as well as from the daughter's perspective as she plays on the slide. These hotspots do disappear as the episode goes on, so you have to be vigilant enough to explore them before they go away.

"The plot here is centered around how quickly someone can disappear. This little girl goes missing in broad daylight, and her mother's life spirals into a personal investigation. And because of these hotspots, you can investigate the story along with the mother," explains Rachel Skidmore, the director of media development over at Skybound Entertainment. "We wanted a story where we could plant clues. Not like a scavenger hunt, but to expand on a scene."

Since the hotspots appear and disappear along the timeline, Skidmore is hoping that we'll have the desire to rewatch scenes again and again to gain different perspectives. "We absolutely encourage rewatching. We even tell you how many 'hotspot' clues there were in the episode after it ends, so if you didn't count that many, you can go and look back." Do you need to watch all of the hotspots in order to understand the story? No, Skidmore says, but you definitely won't get as much depth and perspective as you could if you didn't.

After watching the episode while wearing a Gear VR headset, I have to say that while it's certainly not a game, it didn't feel like a traditional TV show either. I was fully immersed in the scene, scanning the environment for any potential clues as to what happened. I felt pretty distressed right along with the mother when Emilia disappeared, because I too didn't see where she went, even though I thought I saw her a moment ago. It's this feeling of presence, Skidmore says, that makes VR such a compelling storytelling medium. "This is true native VR content," she says. "You couldn't take this show and put it on television."

Of course, it's not like there weren't challenges in making the content. Due to the 360-degree nature of VR, she joked about how the camera crew had to hide behind bushes and trees in order to shoot scenes, and that entire scripts had to be rewritten in order to accommodate more viewpoints and perspectives (Gone was created by author, writer and director JT Petty, who's better known for his work in Splinter Cell, The Burrowers and Outlast). Skybound worked with WeVR for the virtual reality production side of things and used a heavily modified GoPro array along with Sony cameras to capture the video. "Each hotspot, for example, had to be shot separately and with different cameras," says Skidmore. "Every single detail had to be thought out and how the orientation would impact the viewer."

"We're admittedly asking a lot from the viewers," says Matt Apfel, the Vice President of Strategy and Creative Content at Samsung Media Solutions. "Most people who wear VR headsets don't really bother to look around them. But we're hoping that putting a gorgeous well-shot piece of content will get them to do that." The story also unfolds in real-time -- no quick jump-cut scenes here -- so the pace is slower. "You have to immerse yourself in the scene," says Apfel. "We're asking a lot from people. But I think they can handle it."

If you have a Gear VR headset and want to check Gone out for yourself, you can do so pretty soon. Available for free on Samsung's Milk VR service, the first episode will be out starting December 8th, with the rest of the episodes to roll out in batches over the next year.

In this article: art, av, culture, entertainment, gadgetry, gadgets, gear, gone, samsung, samsungmilkvr, virtualreality
All products recommended by Engadget are selected by our editorial team, independent of our parent company. Some of our stories include affiliate links. If you buy something through one of these links, we may earn an affiliate commission.