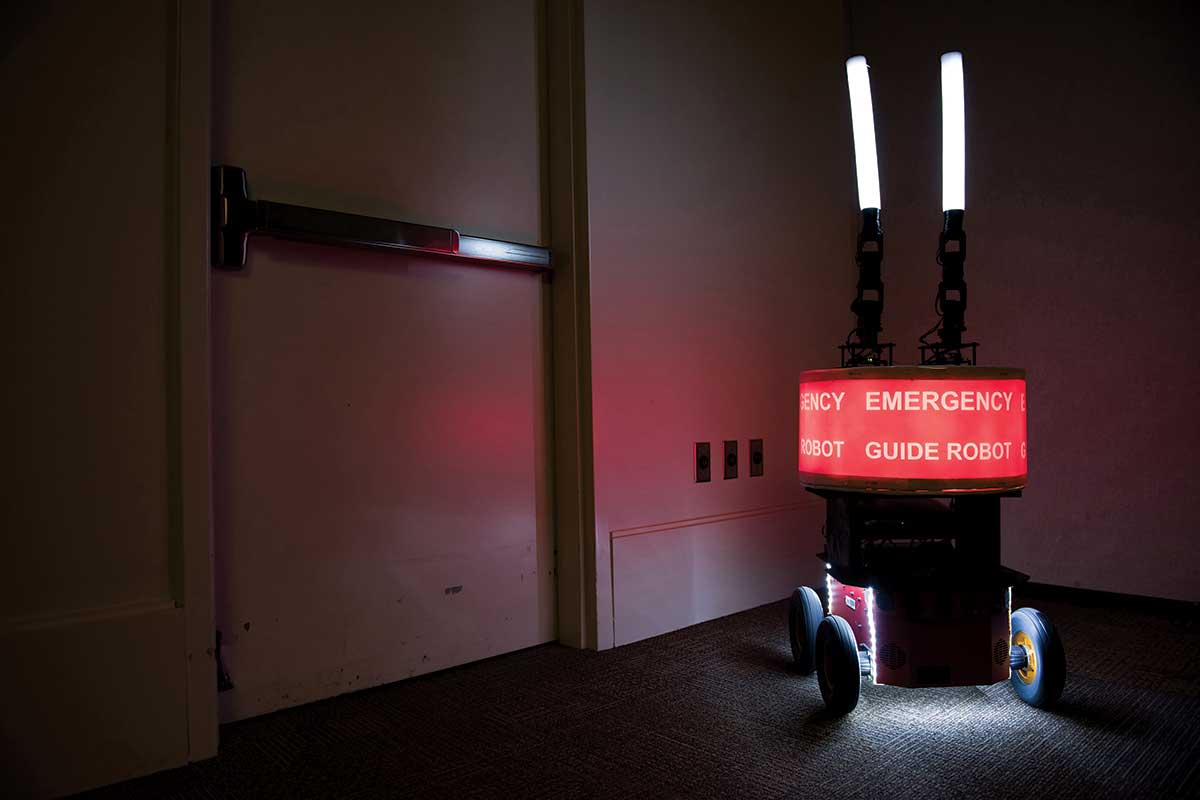 Getting people to trust robots is as big a deal for the future of technology as building them. But, it turns out, acquiring that trust might not be that difficult. Test subjects at the Georgia Institute of Technology willingly followed an emergency robot to safety during a simulated fire, even when it led them away from clearly marked exit signs, New Scientist reports. The findings even surprised Paul Robinette, the graduate student in charge of the study: "We thought that there wouldn't be enough trust, and that we'd have to do something to prove the robot was trustworthy."

30 subjects started out the test by following the robot, a customized Pioneer P3-AT, down a hallway and into a room, where they were asked to fill out a survey. Eventually, a smoke alarm went off and simulated smoke filled the hall. The robot would then lead them through the smoke down a new path, and towards a door they've never seen before. All the while, the subjects could have easily exited through the clearly marked path they originally came through. 26 of the test subjects ended up following the robot, while two never left the room (the other two were kicked out of the study).

So what led to this result? The researchers say it might show that humans will automatically trust a robot if it's designed for a specific task. Indeed, some of the subjects mentioned they followed the bot because it was wearing an "Emergency Guide Robot" sign.

It'd be interesting to see what the results of this test would have been just 10 years ago. These days, most of us are used to following GPS instructions from our phones and cars, even when they lead us down unlikely paths. But you can probably recall the first time you had to follow GPS directions blindly -- there's definitely a bit of a learning curve before you learn to trust the machine. On a similar note, it took me a while to get used to letting Roombas clean my apartment effectively, because to my human eyes it just looked like they were bouncing off walls.

There is, of course, an obvious issue with this automatic trust. There's no way to know if the robot is faulty, which puts a heavy burden on its creators. In followup tests, subjects even followed the bot when it pretended to break down during the simulated fire.

In this article: AI, culture, gadgetry, gadgets, gear, robots, trust
All products recommended by Engadget are selected by our editorial team, independent of our parent company. Some of our stories include affiliate links. If you buy something through one of these links, we may earn an affiliate commission.