Mini review video: Our take on the Galaxy S7 Edge, in just a minute

Samsung has started to find some good uses for that curved screen.

Though Samsung's new Galaxy S7 and S7 Edge are both great phones -- each earned a score of 90 -- it's the Edge that's improved the most over the past year. Whereas the S6 Edge's curved screen felt like a gimmick (albeit a gorgeous one), this year's model introduces some software tricks that do a better job taking advantage of that extra screen real estate. Even if you disagree with us on the gimmick thing, though, it's hard to argue with everything else the S7 Edge brings to the table.

Among its finest attributes: an easier-to-hold design, waterproofing, improved camera, a bigger battery, more powerful internals and the return of the microSD slot, which was omitted in last year's S6 series. In many ways it's the same great phone as the regular S7, except it's bigger, has a curved screen and costs a hundred bucks more. For the money, though, you get one seriously striking design. 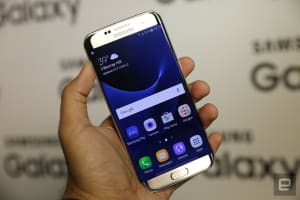