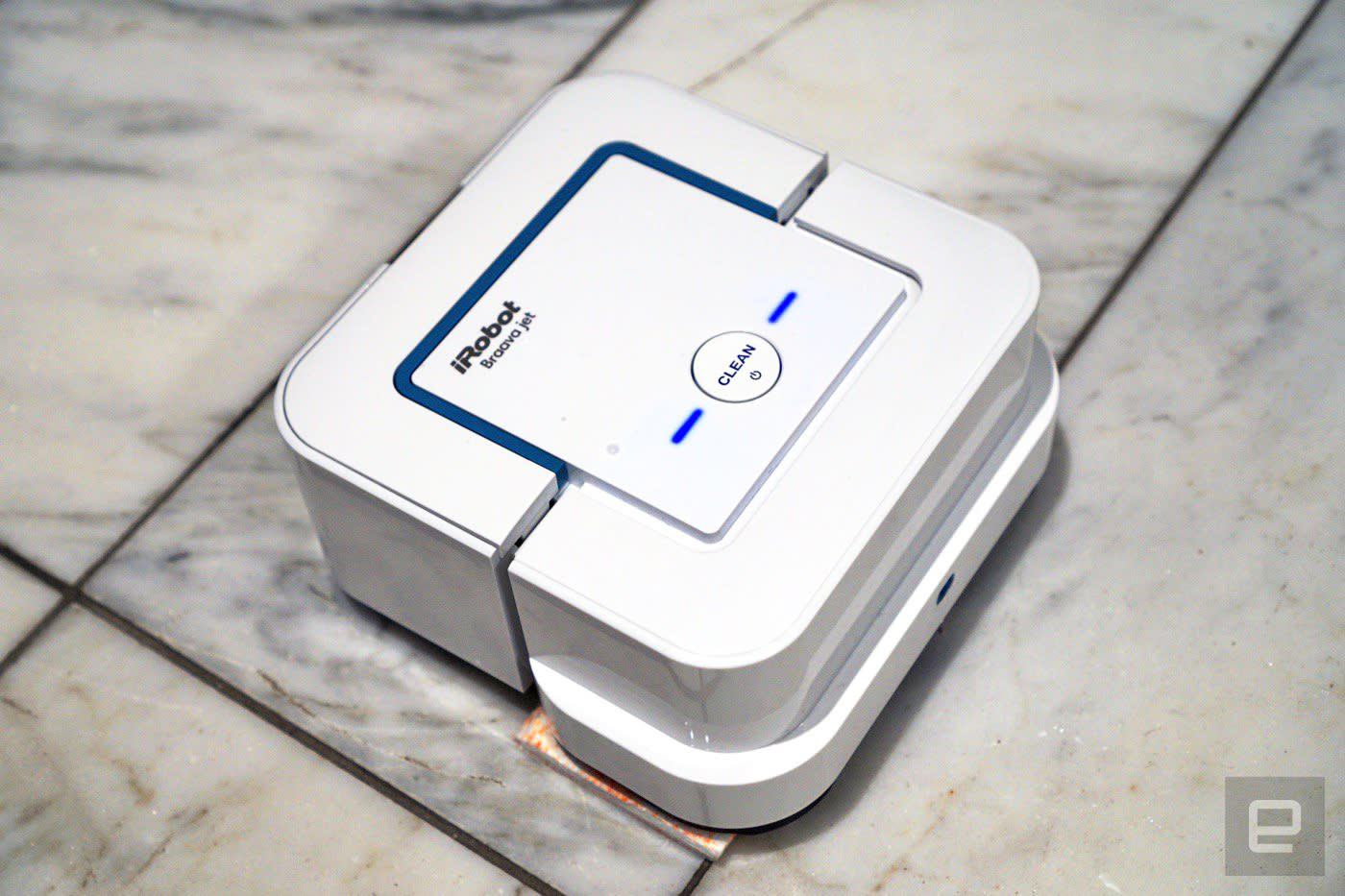 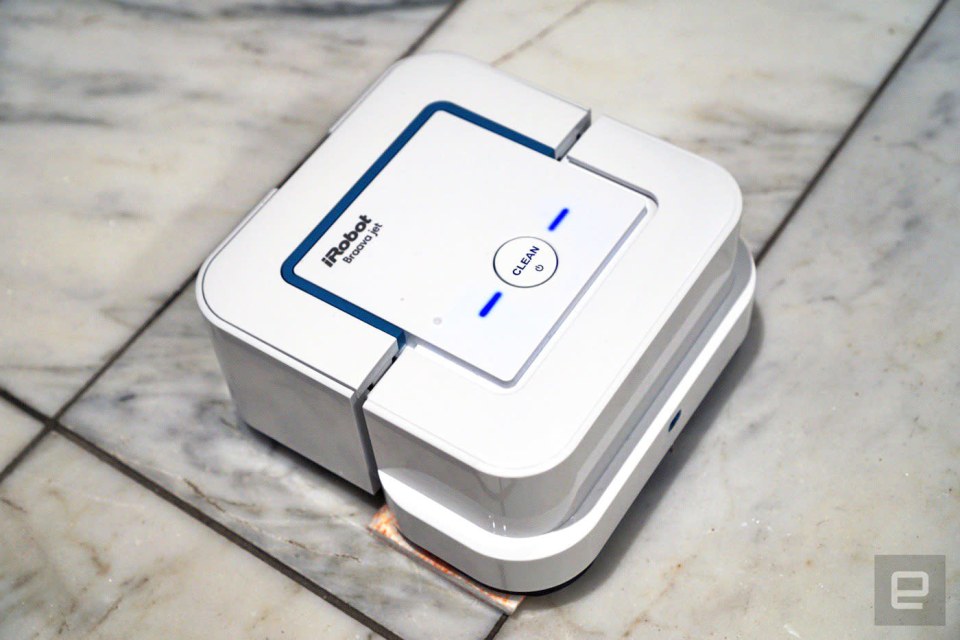 After tackling ever-complex vacuuming, sweeping and mopping bots for most of your house, iRobot took a surprising turn for its latest product: it went small and cheap. The company's new $199 Braava Jet is a tiny thing meant to clean all of the nooks and crannies of your kitchen and bathroom. It's basically a miniaturized version of the company's Braava floor mopping robot (which itself is based on technology it acquired from Evolution Robotics, which used to make the Mint floor sweeping robot.)

Given its price and tiny size, the Braava Jet could open up the dream of automated home cleaning to consumers who'd scoff at the pricy entry point for Roombas (which is around $300 for an outdated model these days). So why build a bathroom and kitchen cleaning robot in the first place? iRobot reps say there's an increasing need among consumers to mop up uncarpeted floors, and, furthermore, they find that cleaning kitchens and bathrooms often takes up the most time. If you're going to make those floors spotless, you'll also need something a lot smaller than the company's existing Braava bots, which are about the size of typical Roombas. There aren't many surprises with the Braava Jet. To use it, you just need to pour in a bit of water into its reservoir; slap on a cleaning pad for wet mopping, damp sweeping (for hardwood floors) or dry sweeping; place it on the floor, and set it on its way. The bot goes up and down your floors, mapping the path along the way. Reps say it can clean a 100 square foot area in around an hour, but it really depends on the cleaning pad you're using. The wet mop pad can handle an area up to 150 square feet, while the dry sweeping pad can go up to 200 feet. The bot uses a lithium-ion battery that should last for around an hour and a half.

When it comes to wet mopping and damp sweeping, the Braava Jet spritzes out a bit of water, and then makes a back-and-forth mopping motion to clean the floor with the solution built into the pads. It takes three passes on your floor for a full round of wet mopping, and two for a round of damp sweeping. The latter pad is mainly meant for people with fancy floors that can't get too wet. Most of us will rely on dry pads to sweep the floor first and the wet pads to finish the job.

You'll get two of each single-use pad bundled with the robot, and you can buy replacements in packs of 10 for $7.99 from iRobot and its retail partners (Target, Best Buy and others). If you're looking for a more sustainable alternative, you can also buy a box of two washable pads for $20. Those won't include any cleaning solution, obviously, so you'll have to supply your own.

During a brief demonstration in a high-end Manhattan hotel bathroom, the Braava Jet managed to clean up a freshly spilled coffee spill without leaving any residue behind. The dirty liquid it picks up is held in the pad, so it won't just spread it all over your floor. The bot wasn't very loud, either, so I wouldn't imagine having a problem running it in my bathroom or kitchen for an hour or two.

Surprisingly, iRobot also included a bit of new technology in the Braava Jet: It can create its own virtual wall (a border that it won't cross while cleaning) with the press of a few buttons. Roomba users, meanwhile, still have to rely on standalone, battery-powered virtual wall devices to do the same thing. iRobot reps say that the Braava Jet manages to do this because of how it maps your floor.

As someone who's been using Roombas for the past 10 years, I'm excited to try out the Braava Jet soon to see if it's actually a capable cleaning bot. I'm also the sort of weirdo who actually likes to clean my bathroom and kitchen by hand, so this bot has a high bar to pass. You'll be able to snag a Braava Jet for $199 starting today, and it hits retail stores on April 1. 9
In this article: BraavaJet, gadgetry, gadgets, gear, iRobot, robots, Roomba
All products recommended by Engadget are selected by our editorial team, independent of our parent company. Some of our stories include affiliate links. If you buy something through one of these links, we may earn an affiliate commission.