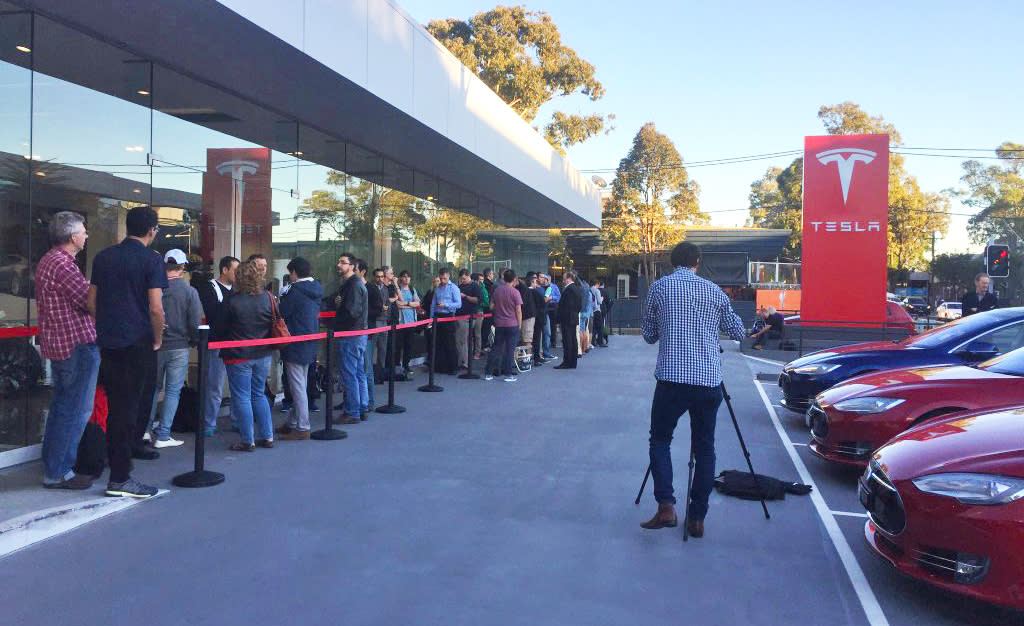 If you're ready for Tesla's $35,000 electric vehicle and have $1,000 ready to put down, then your day has dawned -- at least in Australia. Elon Musk tweeted a pic of the Model 3 pre-order line down under where it's already March 31st, while the rest of us get ready for the company's LA event tomorrow night at 11:30PM ET. Of course we'll be on hand for what he says is just "part 1 of the Model 3 unveil," with a part 2 scheduled for closer to its production in late 2017. In yet another tweet, Musk promised a follower we will "see the car very clearly, but some important elements will be added and some will evolve."

Update: Check out all the details from the Model 3 unveiling (like news that there were 115,000 pre-orders before any had even seen the car) right here.

@rossbin You will see the car very clearly, but some important elements will be added and some will evolve.

Update: Musk has tweeted yet again, stating that pre-orders will open at 7:30pm PT / 10:30pm ET tonight. Also, that you'll be limited to two per customer.

Online ordering at https://t.co/46TXqRrsdr will now open at 7:30pm Pacific to ensure no server overload. Presentation still at 8:30.

Model 3 orders, whether in store or online, are limited to two per person

In this article: australia, ElectricVehicle, EV, gear, Model3, pre-order, Tesla, TeslaMotors, transportation
All products recommended by Engadget are selected by our editorial team, independent of our parent company. Some of our stories include affiliate links. If you buy something through one of these links, we may earn an affiliate commission.