Mini review video: Our verdict on the HTC 10 in a minute

It's the company's best phone in years.

After years of losses and lackluster phone releases, HTC finally seems to have gotten its mojo back. OK, it might be too soon to say if its new flagship, the 10, is enough to help the company reverse its fortunes, but if nothing else it's a fantastic device. We love the 10 for its excellent build quality, fast performance, robust audio setup and out-of-the-box Airplay support. Compared to other high-end phones, though, the battery life is merely average and camera performance doesn't quite measure up to Samsung's new Galaxy S7 line. For that reason, the HTC 10 received a slightly lower score -- 88, versus 90 on the GS7 -- but it's still among the best smartphones you can buy right now. Depending on your priorities, it might even be a better choice than the GS7. 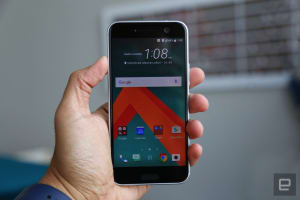