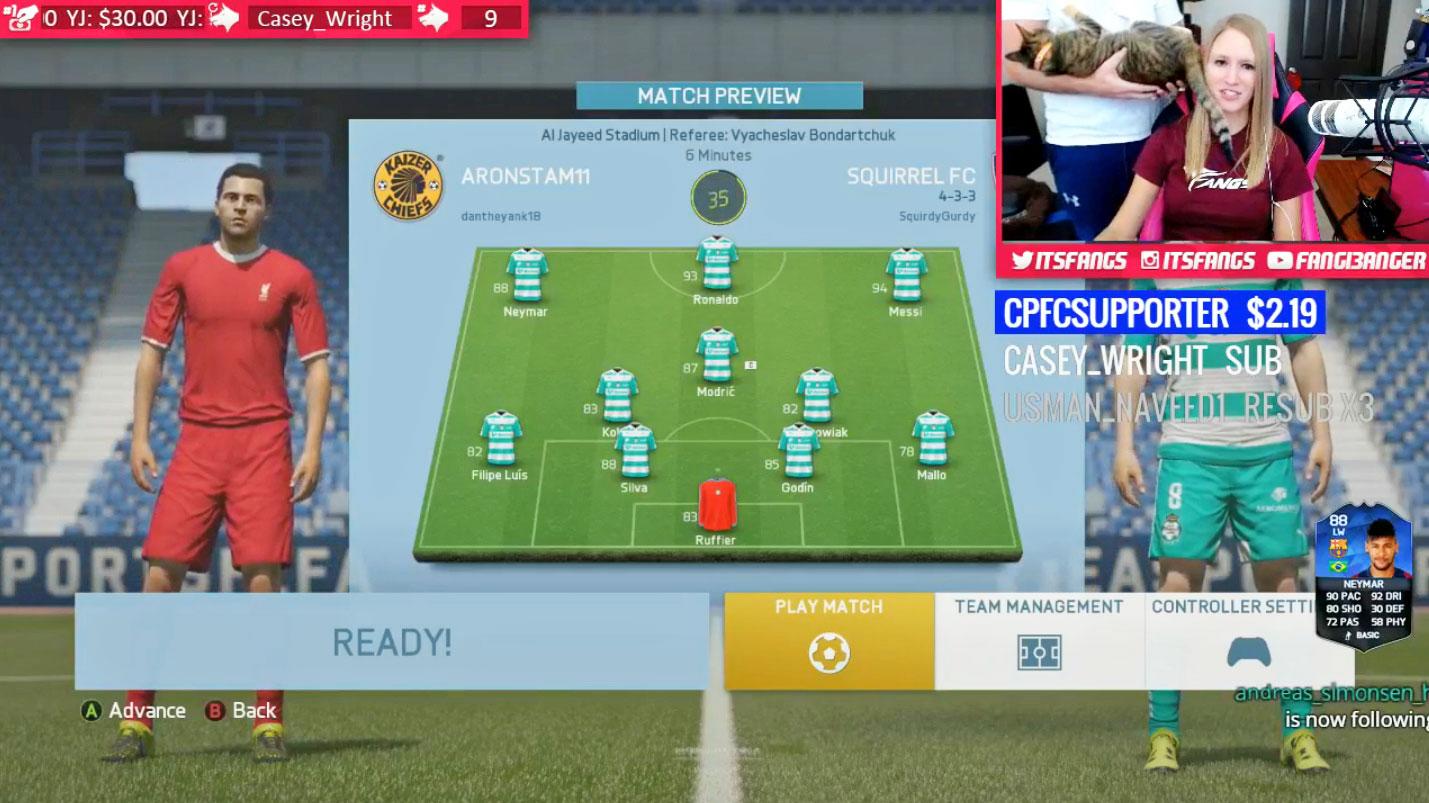 As livestreaming has grown into a billion-dollar business, it's prompted a series of important questions about the future of technology and society. For example: When people share every moment of their lives with the internet, what is privacy? Does accessible, global communication build more community or less? How many AmazeBalls would you spend to feed a treat to a stranger's cat?

That last question may not be crucial to the future of humanity, but it does have a concrete answer: Twitch streamer Jesse "Fangs" Campana calculated that her fans would happily spend 4,500 AmazeBalls to have her feed her cat, Squirrel, live on the air. This isn't a gimmick; it's an essential part of Fangs' job as a full-time streamer and YouTube personality.

If it's not already clear, AmazeBalls aren't actual money. Fangs uses Revlo, a service that allows streamers to hand out custom currency and rewards to their audience members. Revlo is currently available for Twitch, but it'll roll out to YouTube and other services in the near future. For reference, Fangs has 1.05 million subscribers on YouTube and 356,000 followers on Twitch, so that's a lot of AmazeBalls to go around.

As ridiculous as the AmazeBalls economy sounds, this type of engagement strategy is essential to success as a livestreamer. Today, streaming on Twitch is more than simply broadcasting a game to a group of fans. The livestreaming ecosystem has blossomed from a one-way transmission platform into an interactive, community-focused experience, and many of the top streamers have earned their places by showcasing their personalities and talking with viewers while they play.

This level of interaction isn't always easy for broadcasters to achieve. As Twitch has exploded in popularity, the live chat rooms for popular streamers have become impossibly crowded. The chat box scrolls endlessly up and up, pausing every now and then on a screen of emojis and inside jokes before flipping to the next batch, and the next, and the next.

Here's where donations come in: Fans can throw down a small amount of cash (say, $3) to send a message directly to their favorite streamer while he or she is live. The message and donation amount generally pop up over the game itself (usually with a cute animation and sound effects), and the streamer will say thanks and respond. It's a simple way for fans to get the interaction they crave, and it helps streamers earn a living producing entertainment on Twitch.

It's a simple solution, but it's not egalitarian.

"We didn't think that was very community focused," says James Sun, co-founder and CEO of Revlo. "The whole thing that makes Twitch awesome, the whole reason we enjoy watching Twitch, is because everybody feels like they're together. It's very tight-knit. You develop your own jargon, your own internal jokes, your own memes, your own culture, and when you only get noticed if you pay, it just feels wrong."

Sun and his friends came up with Revlo as a way to restore balance to the Twitch chat. Revlo removes cash from the equation and it opens up more channels of interaction for fans. In Fangs' case, that means AmazeBalls instead of dollars (and more treats for Squirrel).

Fangs fans earn two AmazeBalls for every minute they watch her Twitch stream. They can save up and turn in those points for a series of rewards, including requesting a song (1,000 AmazeBalls), receiving a personal email from Fangs herself (6,000 AmazeBalls), playing a game against her (10,000 AmazeBalls), or having Fangs dress Squirrel in a silly outfit for at least 20 minutes of the stream (12,000 AmazeBalls).

For another popular streamer, Tim "Trick2g" Foley, Revlo means more merchandise deals. His viewers earn one GOON buck for watching 10 minutes of his stream, and the first three rewards are codes for 10, 20 and 30 percent off the merchandise in his store, which includes backpacks, mousepads and beanies. Trick2g also has sub-only rewards that are solely available to the people who subscribe to his Twitch channel at a cost of $5 per month.

Revlo makes sense for fans, but it poses some perceived issues for streamers. If viewers can interact with their favorite streamers for free, there's a chance they won't donate as often -- or at all. Trick2g had this exact concern, so Sun ran a case study on his channel to soothe his fears.

"We wanted to prove to him that the money you lose from donations is worth it," Sun says.

As it turns out, Revlo is definitely worthwhile for streamers. On Trick2g's channel, new viewers who used Revlo were 2.1 times more likely to return the following week than non-Revlo users. Existing viewers who started using Revlo spent 48 percent more time watching Trick2g's stream, which translated into more revenue from branded content and advertisements. The sub-only rewards drove more subscriptions his way and the discount codes that he offered through Revlo pushed more people to his store. Overall, the app provided a boost in audience retention, loyalty and direct sales.

Revlo went public earlier in May, but before that, 15,000 broadcasters tried it out in beta form for 5 million unique viewers per month. And there's one notable feature buried within Revlo's userbase -- half of its streamers are male and half are female. Meanwhile, on Twitch, a majority of streamers are men.

Sun sees a huge difference in the way women and men approach streaming, and it might explain Revlo's balanced gender split. In general, men are more antagonistic and women are more welcoming, he says, and since Revlo is a service that encourages interaction, it's well-suited to the warmer female approach. Again, he's speaking in general terms here.

Revlo currently ties into Twitch only, but Sun is working to bring it to YouTube, Twitter, Instagram and other platforms that streamers regularly use. The company just secured $1.12 million in funding, partially from start-up incubator YCombinator and Justin Kan -- the man who founded Twitch.

Kan has moved on since his Twitch days, and he's now a partner at YCombinator and the Group Leader in charge of Revlo. This means Sun and his team will meet with Kan every two weeks for guidance and feedback as they try to grow the app. Simply having Kan on board is already a huge validation of Revlo, Sun says.

Sun has already secured partnerships with major organizations like the Electronic Sports League and he imagines Revlo being used by streamers and companies of all sizes. He thinks mobile is the next big platform for live streaming -- "Look at the number of mobile devices out there versus the number of PCs," he says -- but whatever the industry's future holds, he wants Revlo (AmazeBalls, GOON bucks and all) to be a part of it.

"I think streaming is going to become bigger and bigger in general," Sun says. "I think as we grow and I think as the streaming community grows, there's going to be even more of a craving to be more immersed in the content and actually become a creator while being a consumer."

In this article: amazeballs, amazon, av, business, culture, fangs, gaming, internet, livestream, LiveStreaming, personal computing, personalcomputing, Revlo, trick2g, twitch, youtube, youtubegaming
All products recommended by Engadget are selected by our editorial team, independent of our parent company. Some of our stories include affiliate links. If you buy something through one of these links, we may earn an affiliate commission.