Mini review video: Our verdict on the OnePlus 3 in a minute

While you were refreshing Engadget to see all the new stuff Apple, Microsoft and Sony announced this week, you may have missed the fact that OnePlus came out with a new phone. The OnePlus 3 -- yes, that would be its third-generation flagship -- comes in at a reasonable $399 and as usual, boasts some impressive specs for the price. In addition to offering top-notch internals, it brings a more premium-feeling aluminum design as well as dual SIM support. 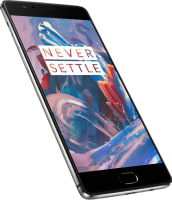 That said, we wish it came with more storage options (just one 64GB version) and the supposedly fast-charging charger isn't always that fast. If money is no object, we still prefer the Samsung Galaxy S7 and HTC 10 -- at least in absolute terms. But if you want a flagship-caliber phone but don't have flagship money to spend, this is your best bet.
All products recommended by Engadget are selected by our editorial team, independent of our parent company. Some of our stories include affiliate links. If you buy something through one of these links, we may earn an affiliate commission.