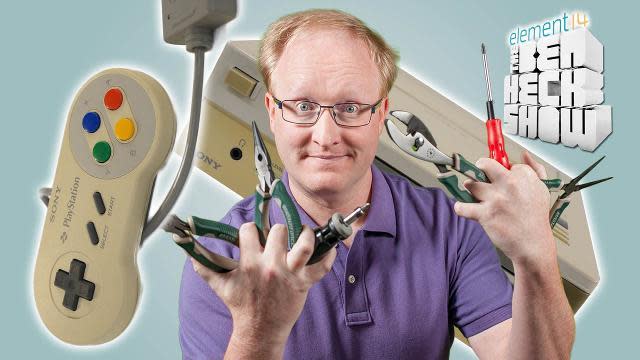 It was originally thought to be a rumor: a games console that combined Sony and Nintendo hardware. Now Ben Heck proves it does exist. Thanks to Terry and Dan Diebold, who approached The Ben Heck Show team with the console, Ben was able to give you an exclusive teardown of the elusive Super Nintendo / Famicom and Sony PlayStation hybrid console. While taking apart the device, called the SFX-100, Ben guides us through the post-production alterations made to fix the prototype and gives us a tour of all the components on the board, including a custom audio chip and standard Sony integrated circuits. We also compare the system to similar consoles at the time, such as the PC Engine / TurboGRAFX-16 and the Sega MegaCD. The real question is, can we get it working? Let us know what you think of the teardown over at the element14 Community, where you can also interact with The Ben Heck Show team and learn more about Nintendo and Sony's history.

In this article: av, benheck, benheckshow, diy, do it yourself, doityourself, element14, gaming, gear, nintendo, partner, sfx-100, sony, syndicated, teardown, thebenheckshow, video
All products recommended by Engadget are selected by our editorial team, independent of our parent company. Some of our stories include affiliate links. If you buy something through one of these links, we may earn an affiliate commission.