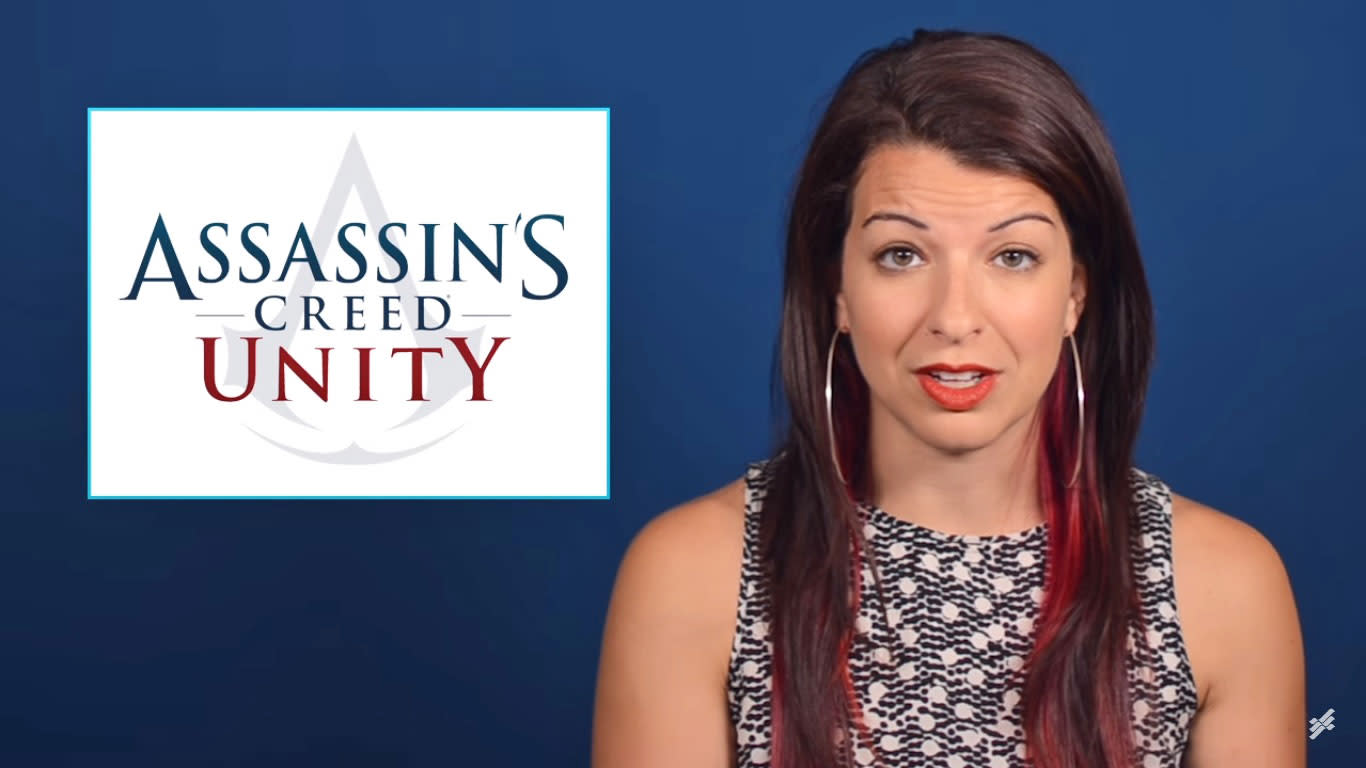 After shifting its schedule to release shorter, more rapid entries in its series Tropes vs. Women in Video Games earlier this year, the cultural criticism web channel Feminist Frequency posted its latest episode today. It tackles the excuse game studios have given when they don't include female playable characters: that women are too hard to animate. (Spoiler: they're not.) When one sex is treated differently in games, the video argues, negative and predatory attitudes proliferate.

The episode's title comes from the 2014 game showcase convention E3 when Ubisoft's trailer for Assassin's Creed: Unity was criticized for lacking any playable women. Their response: animating female protagonists would have been too much work on their tight release schedule. The resulting social media firestorm between critics and supporters brought up a crucial question: how much work are studios willing to put in to include feminine protagonists?

Though Ubisoft would pointedly include Evie Frye as a main character alongside her twin brother in the next year's Assassin's Creed: Syndicate, show host Anita Sarkeesian lists how long it took other franchises to bring playable female characters into their games. The FIFA series didn't have women's soccer teams until its 2015 iteration, while Call of Duty took a decade before 2013's Call of Duty: Ghosts introducing the ability to choose a female avatar in multiplayer. The Battlefield franchise, on the other hand, still doesn't allow players to be female.

She also picks apart a common non-inclusion defense that bringing women in to the fray would promote violence against women. As in most things, intention is everything: it's only promoting abuse if women are being attacked because of their gender. In the Street Fighter games, for example, Chun Li is on relatively equal footing with any of her male combatants and wants to be in the fight.

"Whenever female combatants are dressed in sexual attire, it sets them noticeably apart from other enemy units. It's intended to make the players' encounters with them sexually titillating, and that's particularly troubling when players' encounters often involve fighting and killing those characters. Violence against female characters should never be presented as 'sexy,'" Sarkeesian said. "The way for games to handle female combatants is not to present them as sexualized treats for the player. Rather, it's to present them simply as combatants who happen to be women fighting alongside their male counterparts on equal footing."

Some titles, even the mega-million-dollar tentpole games, are starting to do this right: the aforementioned Assassin's Creed: Syndicate presents women in both the enemy and ally rank-and-file, undifferentiated from men in the same role. Some studios are shrugging off the criticism that having a parity of sexes isn't realistic to the setting, like having as many female soldiers as male. But games, even ones that draw on historical locations or events like the Assassin's Creed series, create their own worlds and set the tone for what we will or won't believe, said Sarkeesian.

"To participate in the worlds games create, we happily accept time travel, superpowers, ancient alien civilizations, the ability to carry infinite items, the idea that eating a hot dog can instantly heal your wounds and a million other fictions. It's certainly not too much to ask that these fictional worlds give us believable female combatants," said Sarkeesian.

Representation is key, she concludes: when female combatants are presented as normal and typical, players accept them just fine. And as for believability, unlike those magical healing hot dogs, female combatants actually exist in the real world.

In this article: anita-sarkeesian, feminism, feministfrequency, gaming, internet, tropes-vs-women-in-video-games, women
All products recommended by Engadget are selected by our editorial team, independent of our parent company. Some of our stories include affiliate links. If you buy something through one of these links, we may earn an affiliate commission.