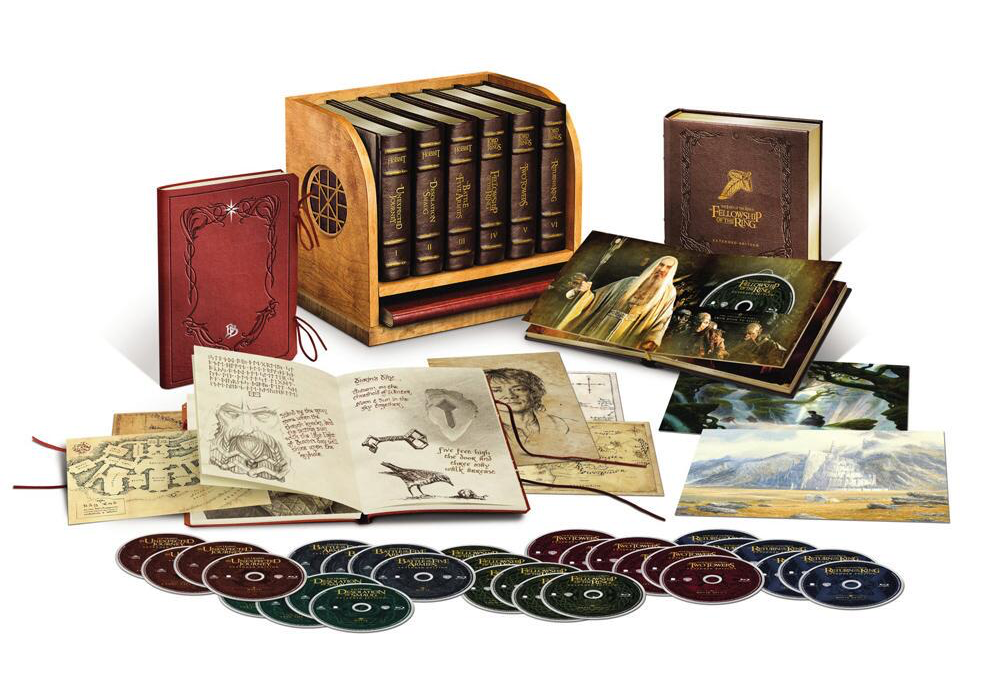 Yes, many Lord of the Rings fans (including this writer) may be obsessive collectors, but the latest movie collection that Warner Bros. and New Line Cinema are releasing this far takes things into the realm of the truly crazy. The just-announced "Middle-earth Limited Collectors Edition" includes the extended editions of all six of director Peter Jackson's films set in J.R.R. Tolkien's imagined world on Blu-ray. That gets you the three movies based on The Hobbit and three more movies that make up The Lord of the Rings. It all comes in a lavish and beautiful presentation -- but that lovely physical package will set you back a whopping $799.99.

You read that right -- we're talking almost $800 for six films. Granted, there is a ton of extra material here. Each film comes with extensive documentaries chronicling the creation of each film; the press release says that all bonus content ever released for both the theatrical and extended editions of each movie is included. That adds up to 30 discs total.

As for the physical product, you're not getting any pedestrian plastic cases here. Each movie comes in a "faux leather" book, and the six books fit on a solid, "Hobbit-style" wooden shelf with a design selected by Peter Jackson himself. There's also a recreation of the famed Red Book of Westmarch (which Bilbo and then Frodo pen their story in) -- this version contains 100 pages of sketches and artwork from conceptual artists Alan Lee and John Howe. Both Lee and Howe worked on all six films, and both artists have worked in Tolkien's universe since long before Jackson's films arrived. A bunch of watercolor reproductions of their art are included as well, ready for framing.

From the lone picture released here, it looks like a wonderful set for those of us who still love physical media... but that price is just bonkers. However, this Middle-earth collection is hardly the first obscenely-priced media package, and it surely won't be the last. Still, it feels like this set could absolutely have had a more approachable price point while still residing in the "limited" space. For the rest of us, you can drop about $125 on Amazon to get all six extended films, without the lavish treatment.

In this article: art, av, bluray, collectorsedition, entertainment, expensive, lordoftherings, thehobbit
All products recommended by Engadget are selected by our editorial team, independent of our parent company. Some of our stories include affiliate links. If you buy something through one of these links, we may earn an affiliate commission.