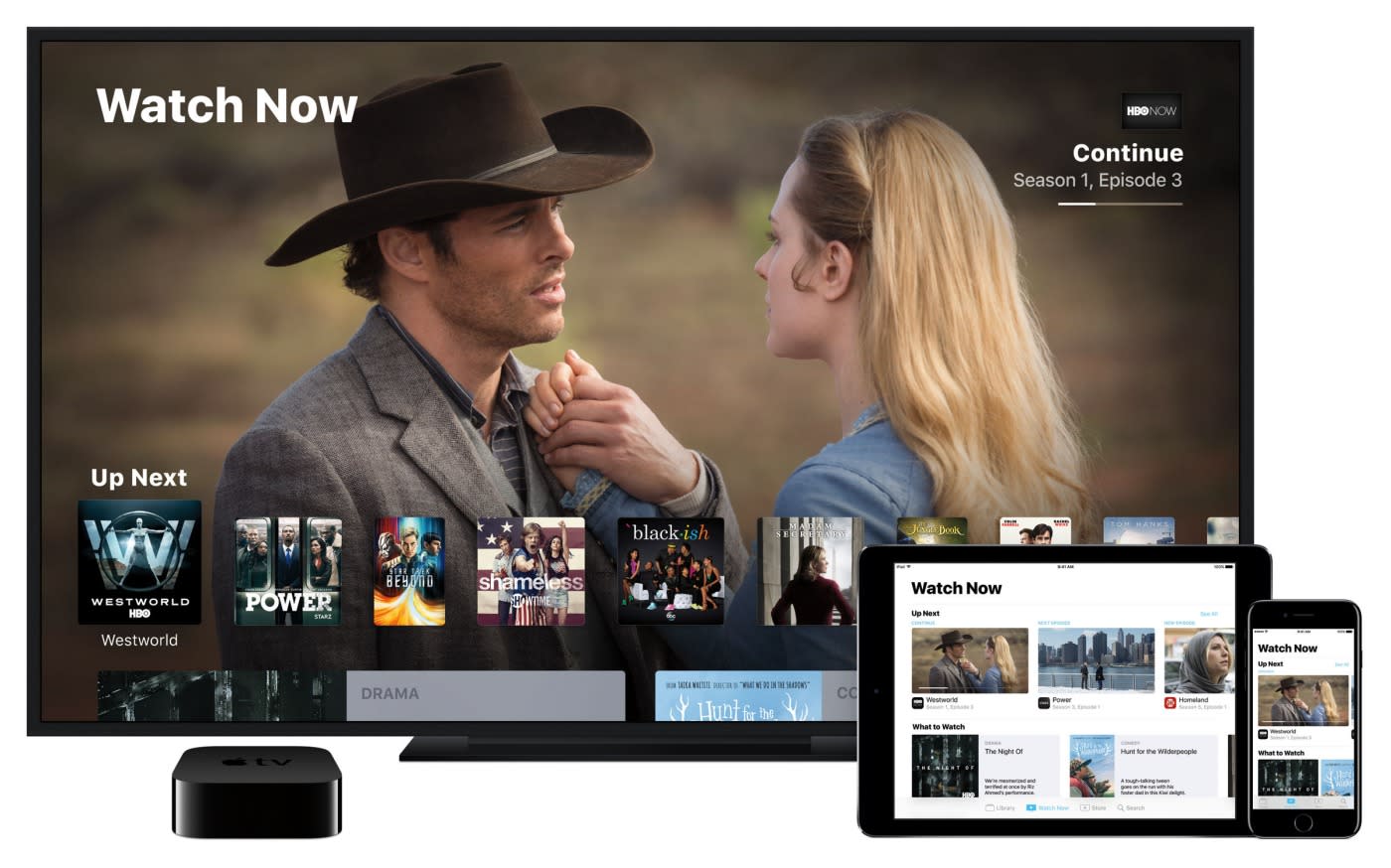 The rumored TV guide app for Apple TV is here, just unveiled at the company's event. It brings TV and movies from the box's various apps into one browsable location. As demonstrated on stage by designer Jen Folse, pressing play within the guide can immediately start a video stream in an app like HBO Now, without any intervening menus. The main "Watch Now" menu knows which apps you've signed into with its unified login feature, and will show options that you have access to. "TV" isn't just for Apple TV either, as the app is also accessible from iPhone and iPad. Another new wrinkle for Apple TV, is the ability for Siri to tune into live video streaming apps, and control third-party apps. Live tune-in with Siri is available now, while single sign-on and the TV app will arrive through a software update in December.

Update: Now that the feature has been officially revealed, Netflix confirmed last night's rumor that it won't be included. According to a spokesperson that it is "evaluating the opportunity, so this could change in the future, but for now it looks like you won't find Stranger Things, Luke Cage or the new season of Black Mirror in Apple's refashioned TV guide.

Key Features Within the TV App Include:

• Watch Now: Watch Now is where viewers will see their collection of available shows and movies from iTunes® and apps. From Watch Now, viewers can then go to Up Next or Recommended to choose what to watch.

• Up Next: Users can enjoy the shows and movies they are currently watching, including recent iTunes rentals and purchases — all presented in the order they are most likely to watch first. For example, when viewers finish an episode, the next one will automatically appear at the start of the Up Next queue, as will any new episodes as they become available. At any time, users can simply ask Siri to continue watching a show and immediately pick up where they left off.

• Recommended: Viewers can explore a great selection of curated and trending shows and movies, including collections handpicked by Apple's curators, and dedicated categories and genres such as kids, sci-fi and comedy.

• Library: Viewers can access their entire collection of iTunes movies and TV shows that they have rented or purchased on iTunes.

• Store: If users are looking for something new, they can check out the Store to discover great new content across video services that they have not yet downloaded or are not yet subscribed to, along with the latest releases on iTunes.

Click here to catch all the latest news from Apple's "Hello again" event.
In this article: apple, applefall2016, AppleTV, av, gaming
All products recommended by Engadget are selected by our editorial team, independent of our parent company. Some of our stories include affiliate links. If you buy something through one of these links, we may earn an affiliate commission.