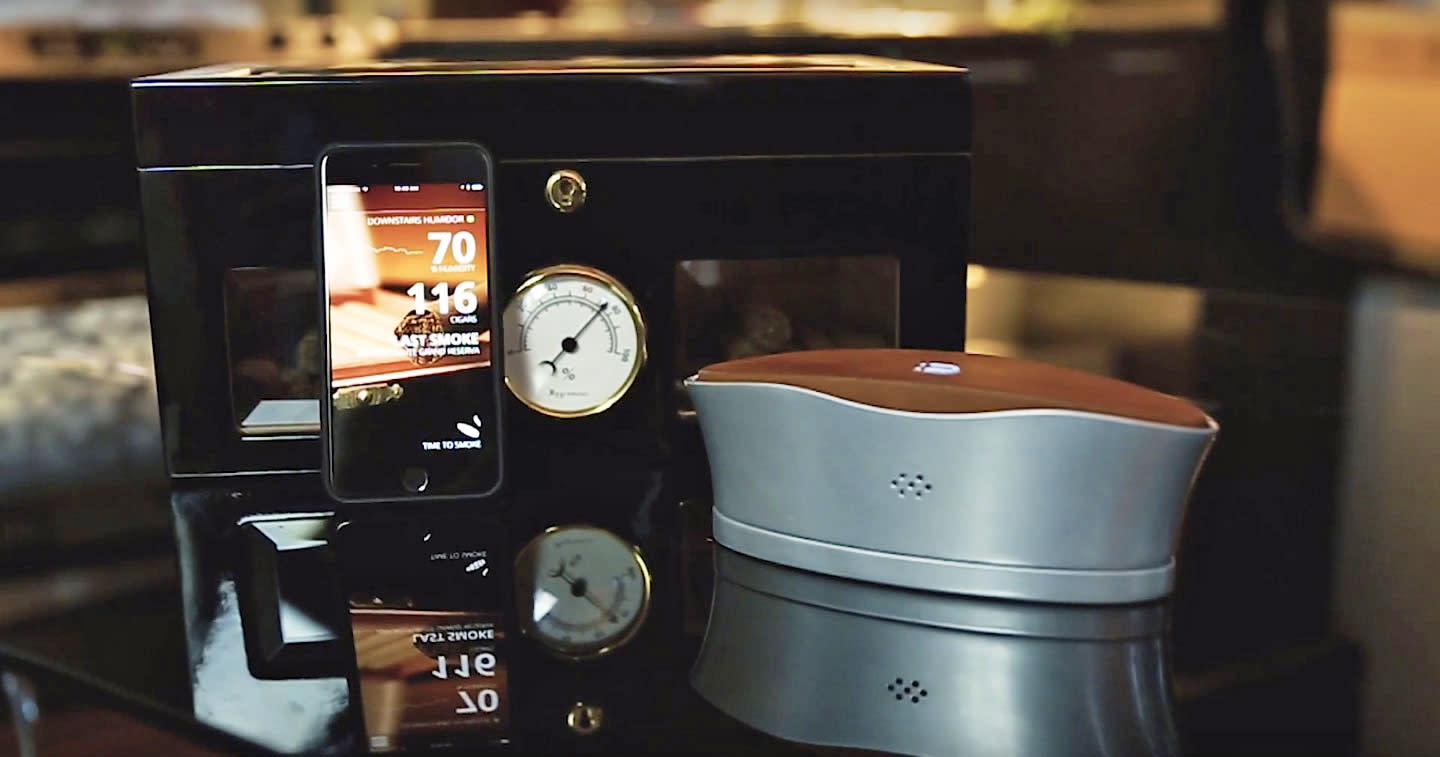 When it comes to keeping cigars fresh in a small humidor, the options range from humdipacks to compact devices that measure and regulate humidity. If you forget to check on the packs or miss a low water or battery alarm, you could be throwing away the money you've invested in your smoking habit. Some of those units allow for optional accessories that add WiFi connectivity, but Cigar Zen has a more modern solution for maintaining a cigar collection. The company has developed Blume: a smart humidification device that connects to your phone to help you keep tabs on the storage space.

Blume's built-in sensor monitors the air inside your humidor and releases water vapor to maintain a certain level as needed. Cigar Zen says that the gadget is different from other active humidifiers, like those from Cigar Oasis, because it employs an atomizing transducer to disperse tiny water droplets that evaporate quickly to adjust humidity. The company explains that this is a much more efficient method for regulating humidity. It also looks a heck of a lot better than the options that are currently available as Blume has a chrome base and either faux leather or carbon fiber top.

With a companion smartphone app, Blume keeps tabs on humidity and alerts you when its time to refill the 250 ml (8.8 ounces) water supply. By the way, the company says you'll only need to do that about once a month. Unlike some active humidors that are on the market, this device is battery powered so there's no cord running into your humidor. That battery is also said to last about a month and there's a backup battery that allows Blume to keep doing its job while the main unit is recharging.

In addition to keeping tabs on the status of your humidifier, the Blume app also helps you keep track of your cigar collection. Inventory controls make use of a range of data, including letting you know when a cigar has aged long enough to ensure the best smoking experience. Cigar Zen is planning on having both iOS and Android versions of the app when Blume launches.

Speaking of availability, the company is currently taking pledges via an Indiegogo campaign with plans to ship in September of next year. The Blume will retail for $295 when it officially goes on sale, but if you're willing to commit now, you can save $50. There are also deeper discounts of $70 and $100 for the first 200 cigar smokers who opt in (100 at each tier). For now, have a closer look at the device in action down below.

In this article: blume, cigar, gear, home, humidifier, humidor
All products recommended by Engadget are selected by our editorial team, independent of our parent company. Some of our stories include affiliate links. If you buy something through one of these links, we may earn an affiliate commission.