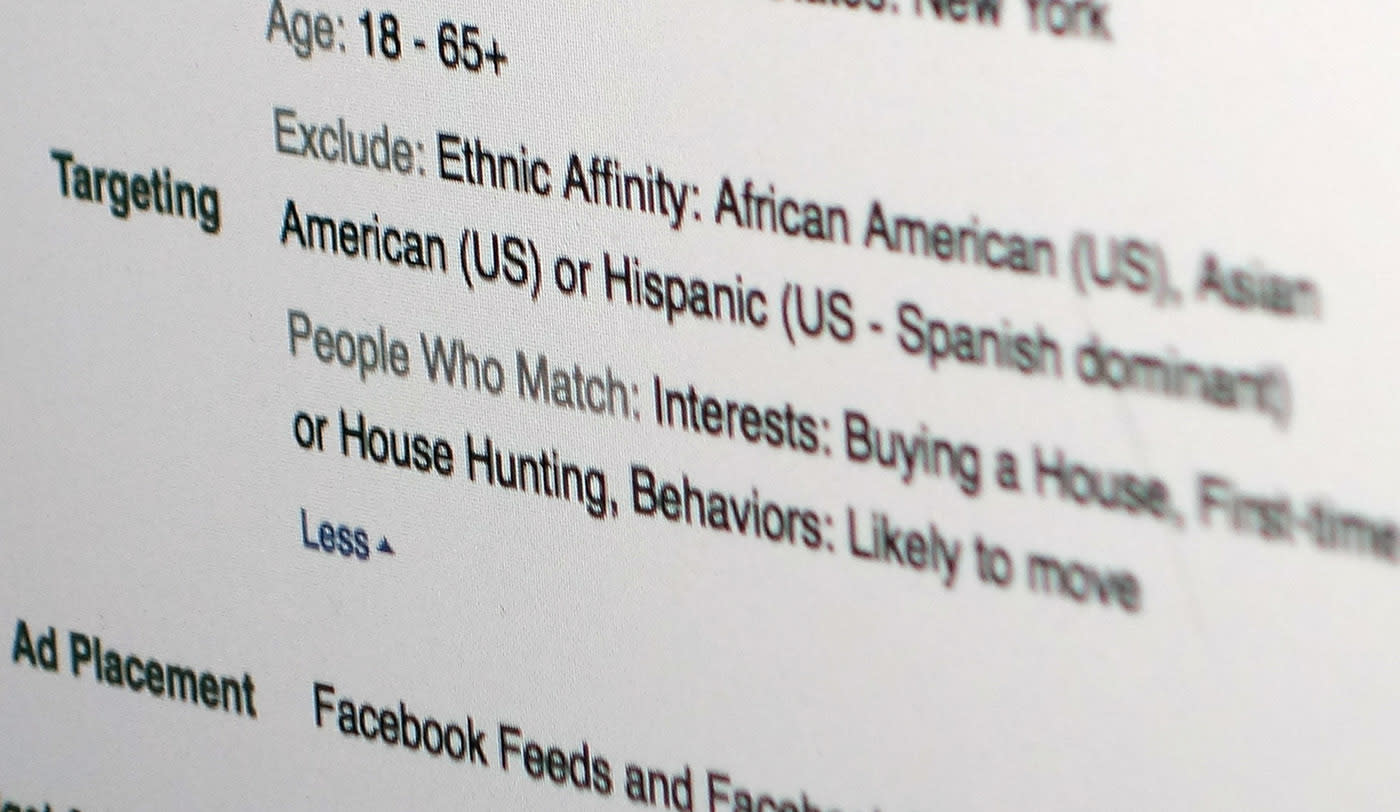 Facebook will disable settings that let advertisers exclude racial and ethnic groups when buying ads for housing, employment or credit, the company wrote in a blog post. It first started allowing "ethnic affinity" marketing several years ago, letting advertisers target specific multicultural groups. However, Propublica noticed that it was able to place housing ads that excluded African Americans, Hispanics, and other groups. That caught the eye of the Congressional Black Caucus, which called it a violation of the Fair Housing Act.

After meeting with members of the Congressional Black and Hispanic Caucus groups, the company agreed to make some changes. "We will disable the use of ethnic affinity marketing for ads that we identify as offering housing, employment or credit," VP Erin Egan said. To do that, the social network will use algorithms that detect and disable ethnic affinity marketing for ads in those categories. It will also update its policies to make the rules clearer and require advertiser "to affirm that they will not engage in discriminatory advertising on Facebook."

To avoid these problems in the future, I urge Facebook and other technology companies to address the lack of diversity in the ranks of their leadership and staff by recruiting and retaining people of color and women.

It appears that the company will still allow ethnic affinity marketing in other ad categories, though. It defended the practice earlier, saying that it "helps brands reach audiences with more relevant advertising." It's not unusual, of course, for advertisers to display different ads for the same products in specific TV markets, for instance, or ethnically-targeted magazines.

However, even outside of housing or employment, many critics still find the practice questionable. For instance, Universal created two completely separate ads for the film Straight Outta Compton, then targeted white and African American users separately on Facebook. As Ars Technica put it, the version aimed at white users makes it look like a gangster film, negatively reinforcing cliched stereotypes. Meanwhile, the ad aimed at black Facebook users focuses on the history and personalities of the artists.

Facebook says that "discriminatory advertising has no place on Facebook," and that it will continue to speak with civil rights groups and policymakers to fight the problem. Black Caucus member Rep. Yvette D. Clarke commended Facebook on the change, but thinks it needs to make a more fundamental shift. "To avoid these problems in the future, I urge Facebook and other technology companies to address the lack of diversity in the ranks of their leadership and staff by recruiting and retaining people of color and women," she tells Engadget.

In this article: Advertising, BlackCaucus, culture, Discrimination, EthnicAffinity, facebook, FairHousingAct, Policy, politics, RobinKelly
All products recommended by Engadget are selected by our editorial team, independent of our parent company. Some of our stories include affiliate links. If you buy something through one of these links, we may earn an affiliate commission.