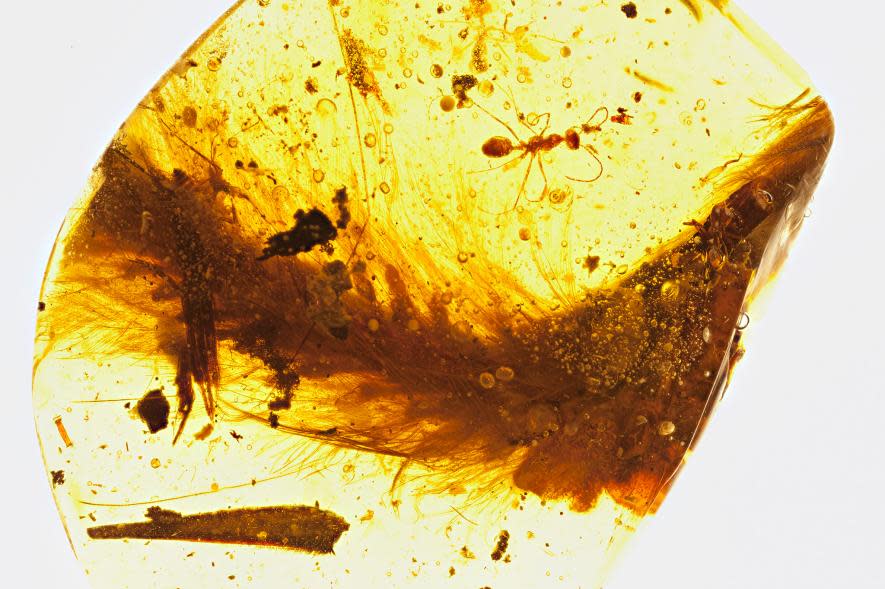 Scientists have found dinosaur-era feathers and evidence of them in fossil impressions before. But this is the first time they've discovered a full-feathered tail section preserved in amber, ripe for forensic analysis and Spielbergian dreams.

Paleontologist Lida Xing of the China University of Geosciences led the research, as detailed in a report that came out today in the journal Current Biology. The sample itself, known as DIP-V-15103 and unofficially as "Eva" after the wife of the report's co-author, came from a mine in Kachin, a state in northern Myanmar. Based on the structure of the tail, it likely came from a Cretaceous-era young coelurasaur, a subgroup of therapods that includes everything from tyrannosauruses to birds, points out National Geographic.

While you should check your excitement for the possibilities of dino DNA, the preserved feathers gave the scientists forensic insight into their role. The encased plumage seems to be ornamental rather than functional: Previous research by the same team found that birds from this sample's era had similar feathers to those of birds today. In short, if the rest of the tail looked like Eva, this dino likely wouldn't have been able to fly.

Xing and his team didn't dig the sample up, however -- they collected it from an amber market in Myitkyina, the capital of Kachin. Burmese amber is often used as jewelry, and Eva had already been shaped by the time it was collected with other samples in 2015.

In this article: amber, ChinaUniversityOfGeosciences, cretaceous, dinosaurs, fossil, science
All products recommended by Engadget are selected by our editorial team, independent of our parent company. Some of our stories include affiliate links. If you buy something through one of these links, we may earn an affiliate commission.