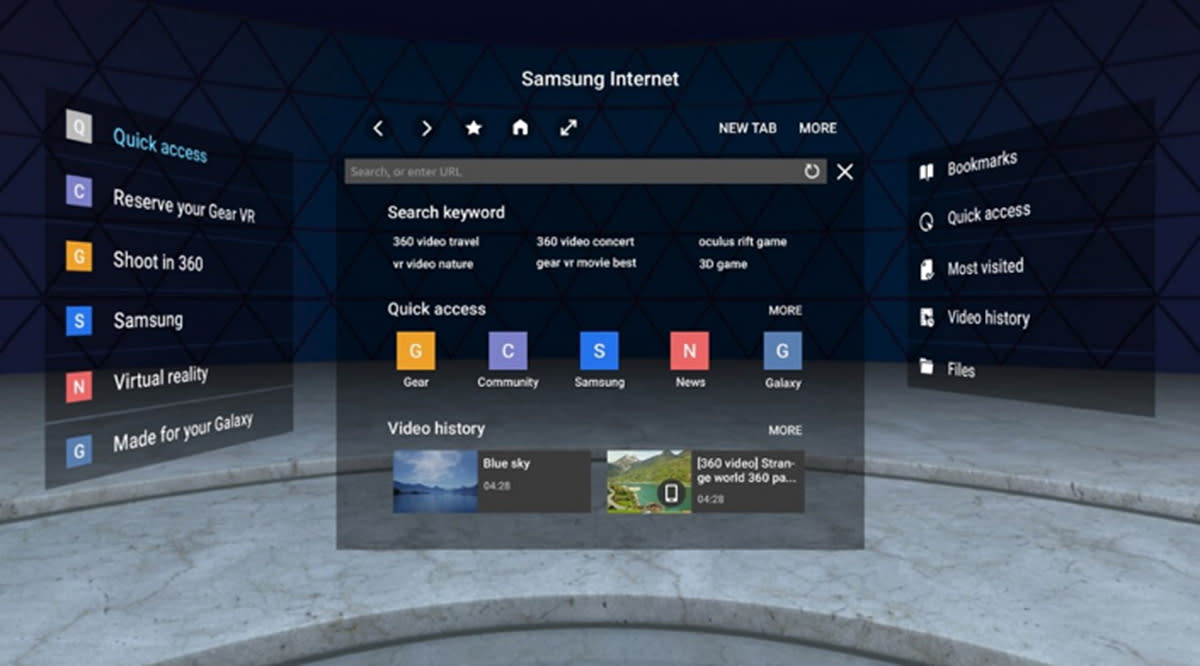 One of the best reasons to (still) consider a Galaxy S7 smartphone is the Gear VR headset support, and with Google's Daydream a looming rival, Samsung wants to keep things that way. As such, Samsung recently updated its Internet for Gear VR browser used inside the virtual reality headset. The biggest change is support for WebVR 1.0, the first iteration of the experimental VR internet browser standard developed by Google and Mozilla. The feature makes it easier to view 3D images and streaming VR content on the device.

The company says with the 4.20 update (actually released last month), the browser now "allows users to surf the web and enjoy videos and photos on a large, virtual screen, just as if [they] were at the theater," according to the blog post. It also supports 180 degree streaming video on the web, making it easier to view 3D VR videos from YouTube, for instance.

You can also set a 360 degree background image from one supplied by a cloud graphics company called OTOY. That, along with the "Skybox" feature (which lets websites set their own 360 background images), adds a stronger VR element to web browsing.

Samsung integrated its file browser in the Gear VR, making it easier to find and open movies and other content, aided by voice control and the on-screen keyboard, which now supports 11 languages. Intriguingly, Samsung also introduced Bluetooth capability to the browser, including support for the Gear S3 smartwatch. It didn't specify what you could do with it, but hopefully it'll give you a bit more control over content or games than just using the touchpad, on-screen keyboard or optional gamepad.

In this article: 360-degree, Browser, Content, gear, GearVR, Headset, internet, samsung, SamsungInternetForGearVR, VirtualReality, wearables
All products recommended by Engadget are selected by our editorial team, independent of our parent company. Some of our stories include affiliate links. If you buy something through one of these links, we may earn an affiliate commission.