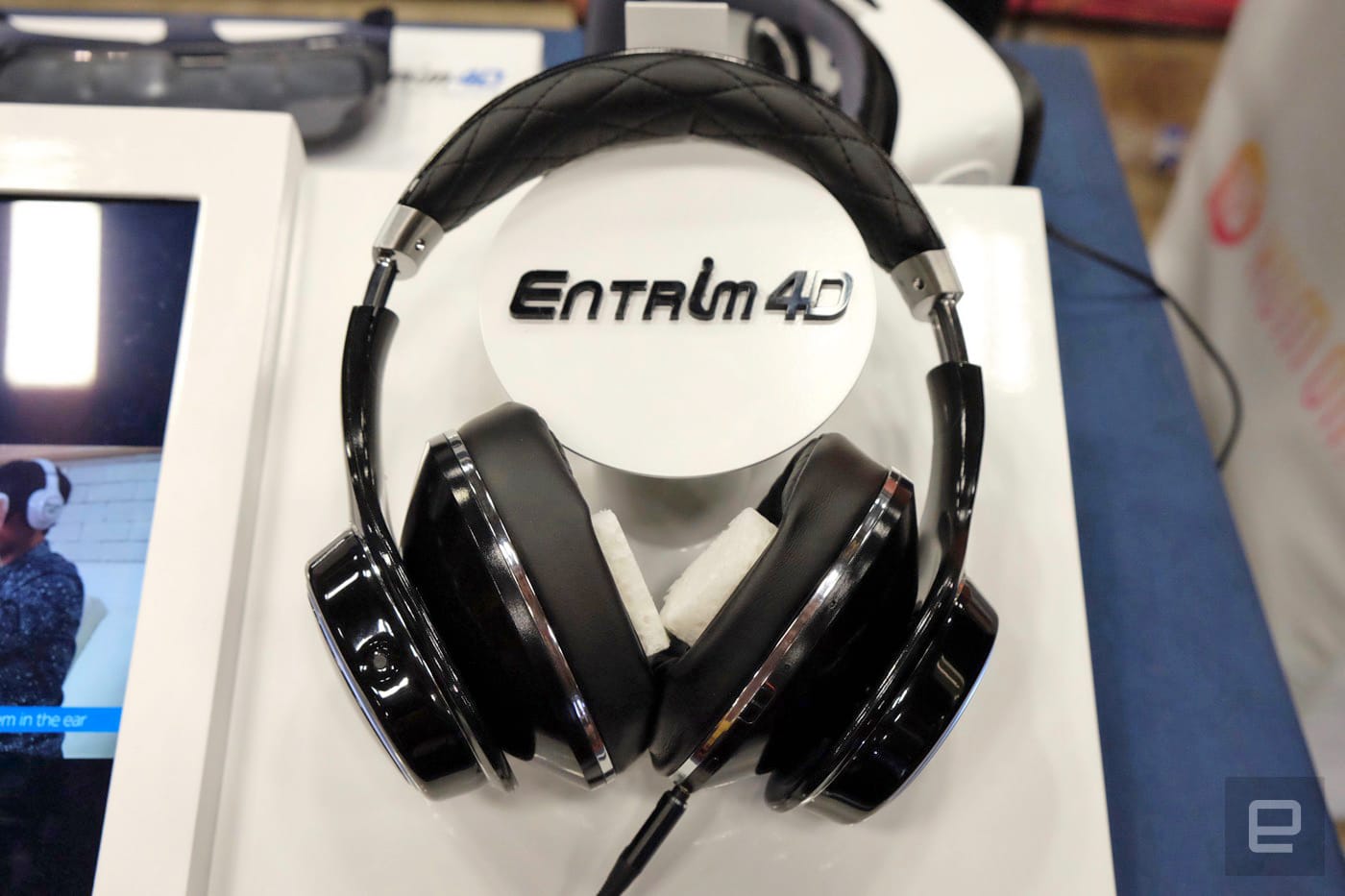 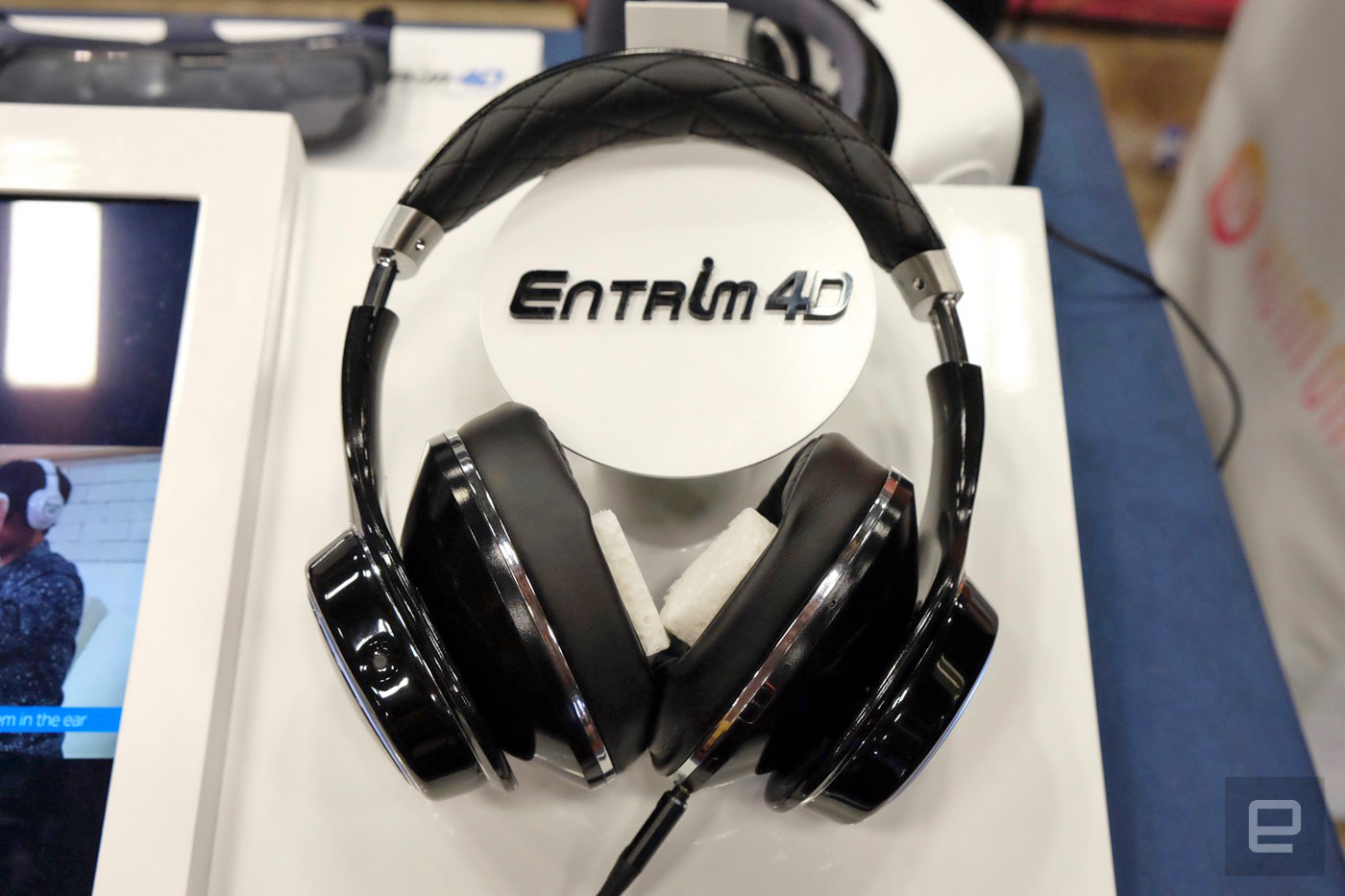 Not to be outdone by Sony's experimental Future Lab hardware, Samsung is showing off a trio of projects from its C-Lab teams. The most intriguing of these three is definitely the Entrim 4D hardware. It looks like a basic pair of over-ear headphones, but they use electrical signals to trick your brain into feeling a sense of motion.

In the back of the two headphones are two slightly damp sponges that cover the electrodes; these electrodes and the sponges line up just below your ears. The technical term for what these headphones do is "Galvanic Vestibular Stimulation," but basically the headset sends electric signals to a specific nerve in your ear. Samsung showed off the headphones in conjunction with a Gear VR to feature a demo of a car racing around a track. First, you watch the VR video with the motion simulation off to get a baseline. But then, the Entrim 4D effect kicked in, and as the car went around the curves, both my head and stomach felt the unexpected and familiar feeling of motion.

While it was a bit of a disorienting feeling, it definitely added a sense of realism to the experience. And Samsung believes such effects can actually help combat motion sickness that people often feel when trying VR. The team believes there's a "mental discrepancy" between seeing things in virtual reality and not feeling the other senses kick in to complete the picture, and something like the Entrim 4D might help to make VR even more realistic and less disorienting.

Samsung also had a few other more lighthearted, app-based projects to show off. The Hum On app lets you hum a melody into your smartphone speaker; it'll then record the melody and play it back to you with a piano-like sound. From there, you can pick a number of genres (rock, R&B, symphony) and fill out the sound of your melody with some background instruments and effects. It's a classic weird Samsung app, but musicians might appreciate the ability to quickly hum a melody popping into their head and have it saved for later review.

The project on display was collaborative social app Waffle. One person starts a waffle by adding a picture and sharing it to a group of friends. You can add text and draw on the image, like Snapchat lets you. But it gets more interesting when your friends start contributing. They add photos all along the outside edge of your picture, making a large grid of images (hence the Waffle name). It's a cute but entirely inessential app, though it's possible users could find ways to make some visually interesting collages.

It's not clear when these projects will make it out of the experimental phase as fully-fledged products. A beta of the Waffle app is already in the Google Play Store, but there was no word on when Hum On would be out. Similarly, it's not clear if or When Entrim 4D will become an actual, shipping product. The team behind it is already working on another version that has more electrodes to help create a more realistic sense of rotational movement. I'm not sure if I want VR to get that real, but it's worth trying out, at the very least.

Source: Samsung
In this article: entrim4d, gear, hands-on, humon, motionsimulation, samsung, sxsw2016, vr, waffle, wearables
All products recommended by Engadget are selected by our editorial team, independent of our parent company. Some of our stories include affiliate links. If you buy something through one of these links, we may earn an affiliate commission.