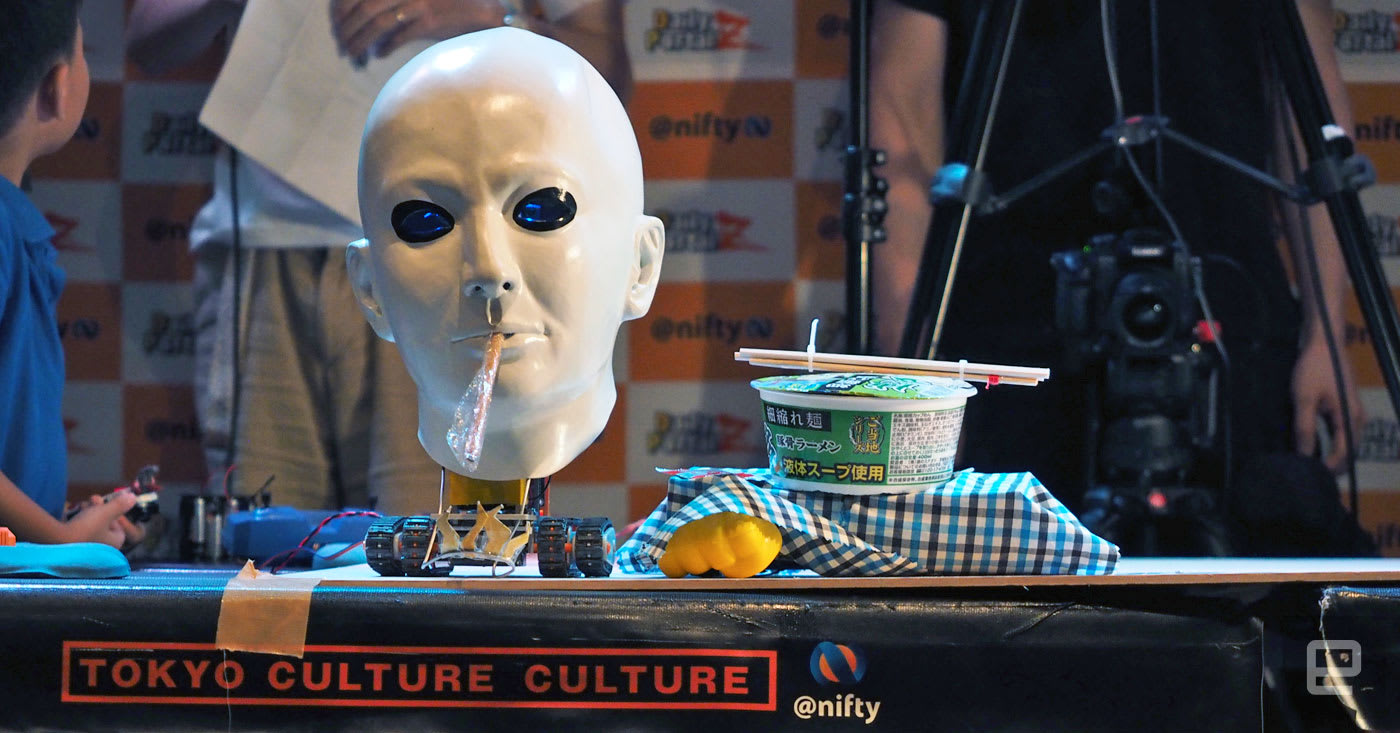 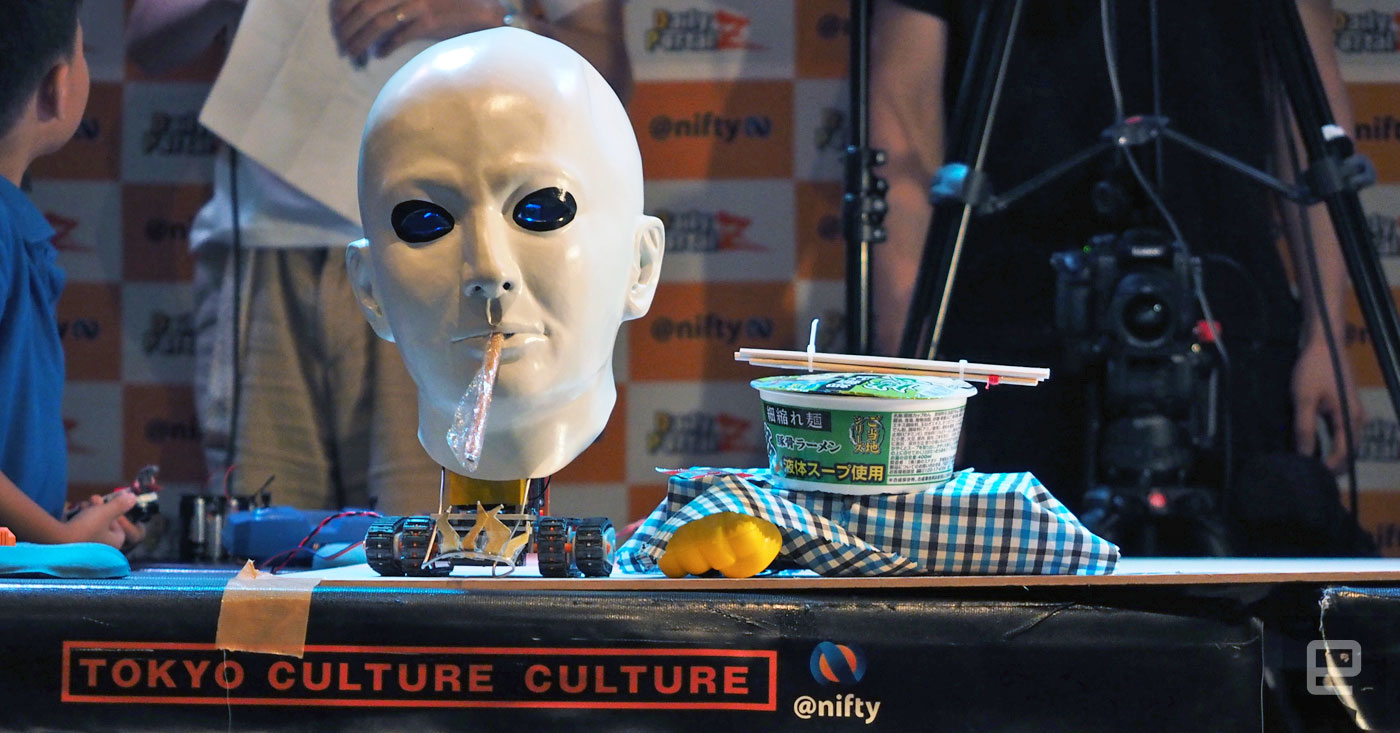 Sex toys, dried squid, repurposed Happy Meal toys and the husk of a Gameboy Advance are just some of the components found in the robotic competitors at Hebocon -- a contest that aims to crown only the ropiest of robots. But what is it, and why hold a competition for such poorly made things? I went to the first world championship in Tokyo (where else?) to stare and make gifs. Heboi is a Japanese word that loosely means something is technically poor, or crappy. Thus: Hebocon, which, according to the founders, extends to both the robots and the people that make them -- but in an affectionate, pat-on-the-back kind of way.

The competition involves several sumo-style matches in which the robots try to push their opponents out of the arena. It's no DARPA challenge, but when you see the robots in action you begin to realize it's almost as difficult a struggle. Most of the robots on show at Hebocon can't be controlled very well. Some can't be controlled at all, while others stay rooted to the spot, with parts spinning wildly out of control, hoping to knock their opponent away and out. (That last scenario didn't happen once.)

That's not to say technically skilled people can't participate: They just need to ignore that part of their brain. "Focus on how you can avoid using anything technical, and only try out ridiculous ideas you've never seen or heard of in your life. If things aren't looking good, then you have the right to participate in Hebocon." This is what it says on the Hebocon intro site. In other words, iterative, polished robots aren't welcome here.

The sheer level or randomness and crappiness on show ensures it's a hilarious, unpredictable competition. To celebrate the 30th anniversary of Japanese internet company (and sponsor) Nifty, it held the first world Hebecon championship. It was as crappy as I had imagined. 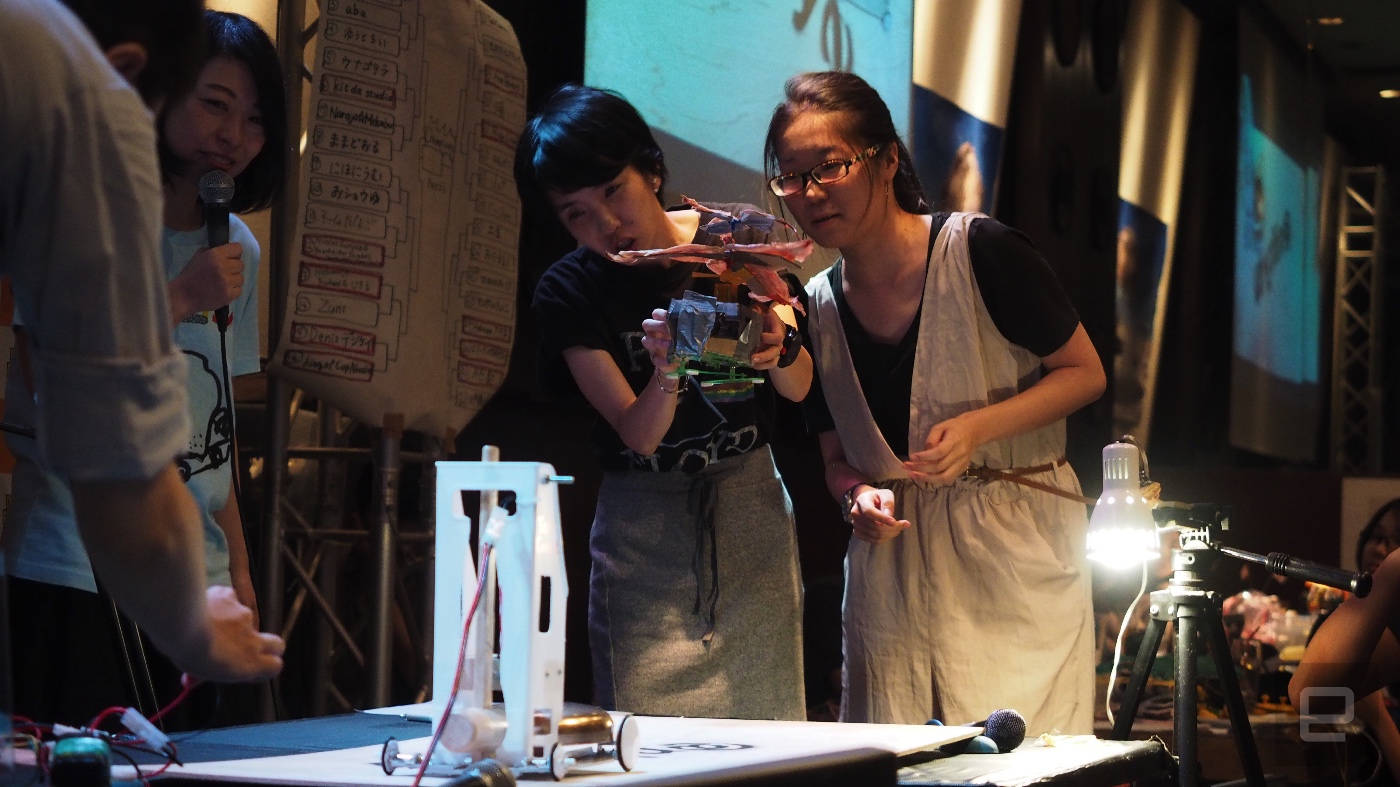 Glamorous Squid Machine is the first robot from two women who normally work at an art museum. The bot's most notable feature is its ... aroma: two circular layers of dried squid ("It's my favorite bar snack") spin at a high enough speed to almost topple the robot itself. The team hoped the stench would affect rival robot pilots. Plastic feet at the base shuffled the mess of dried organic flesh and motors toward the competition -- when they wanted to. The robot, unfortunately, didn't move when it came to the crunch and was knocked out in the first round. "The event has a great atmosphere. Even if the robot doesn't move, no one gets angry. They cheer," said one of the women. 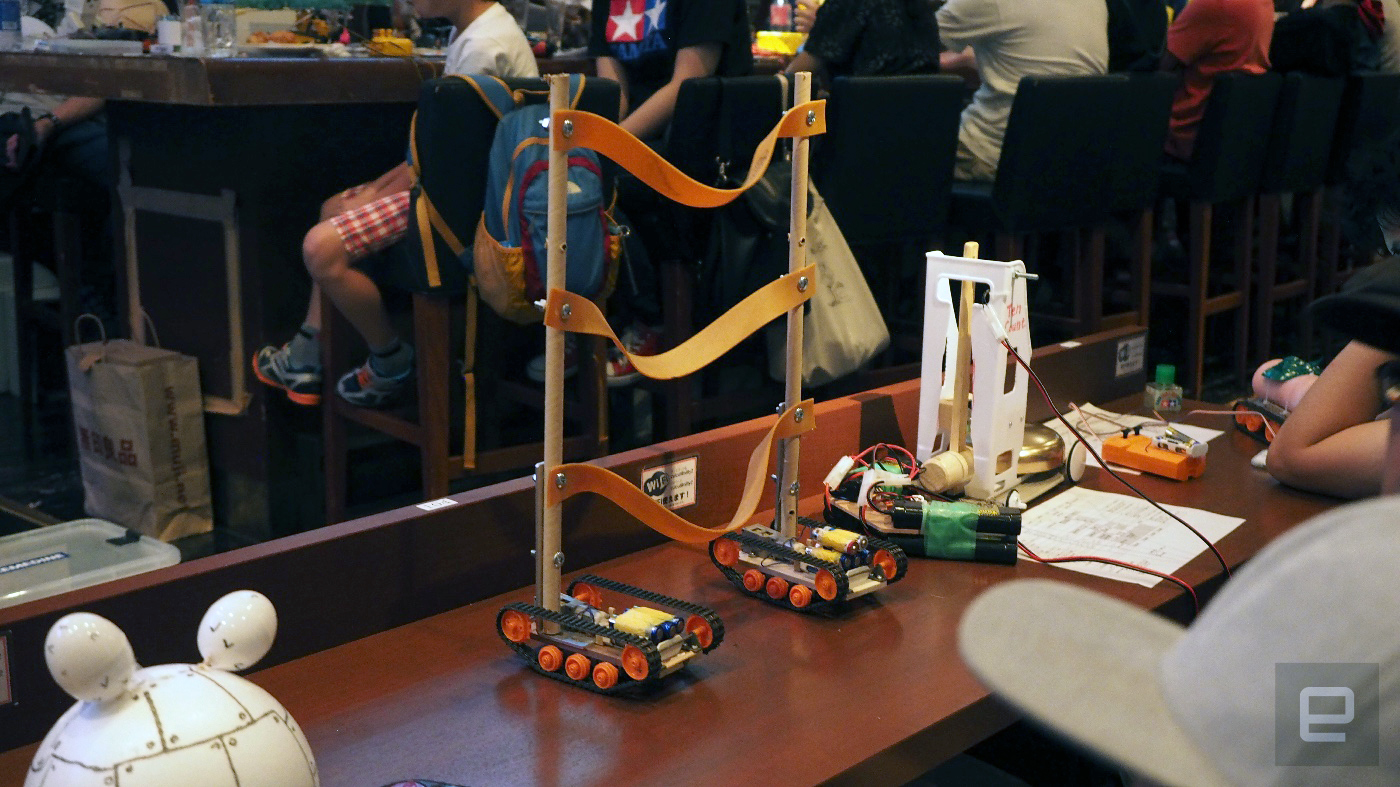 Apparently styled after Mad Max (I don't see the similarities, either), Kenji Itou's robot planned to clothes-line its rivals with multiple rows of heavy-duty rubber bands. Unfortunately, its first opponent was shorter than the lowest band, and the match was over quickly. "I didn't really give much thought to the height of the bands", said Itou.

Pole Dance Robot [Party Rock Anthem] -- that's the full name -- involves a pole (naturally), a Barbie that's seen better days, and a Bluetooth speaker blaring the Party Rock Anthem. Despite the obnoxious music choice, it was an early crowd favorite. When PDR [PDA] met defeat, it went out in garish style, shooting millions in fake yen out of twin-mounted fans. As the referee noted: "It can't really attack at all." Creator Anipole Kyoko's reply? "It's more important to keep the party going." Amen. It won the audience choice award for being the most heibo of all the entries. It's hard to argue with their selection. 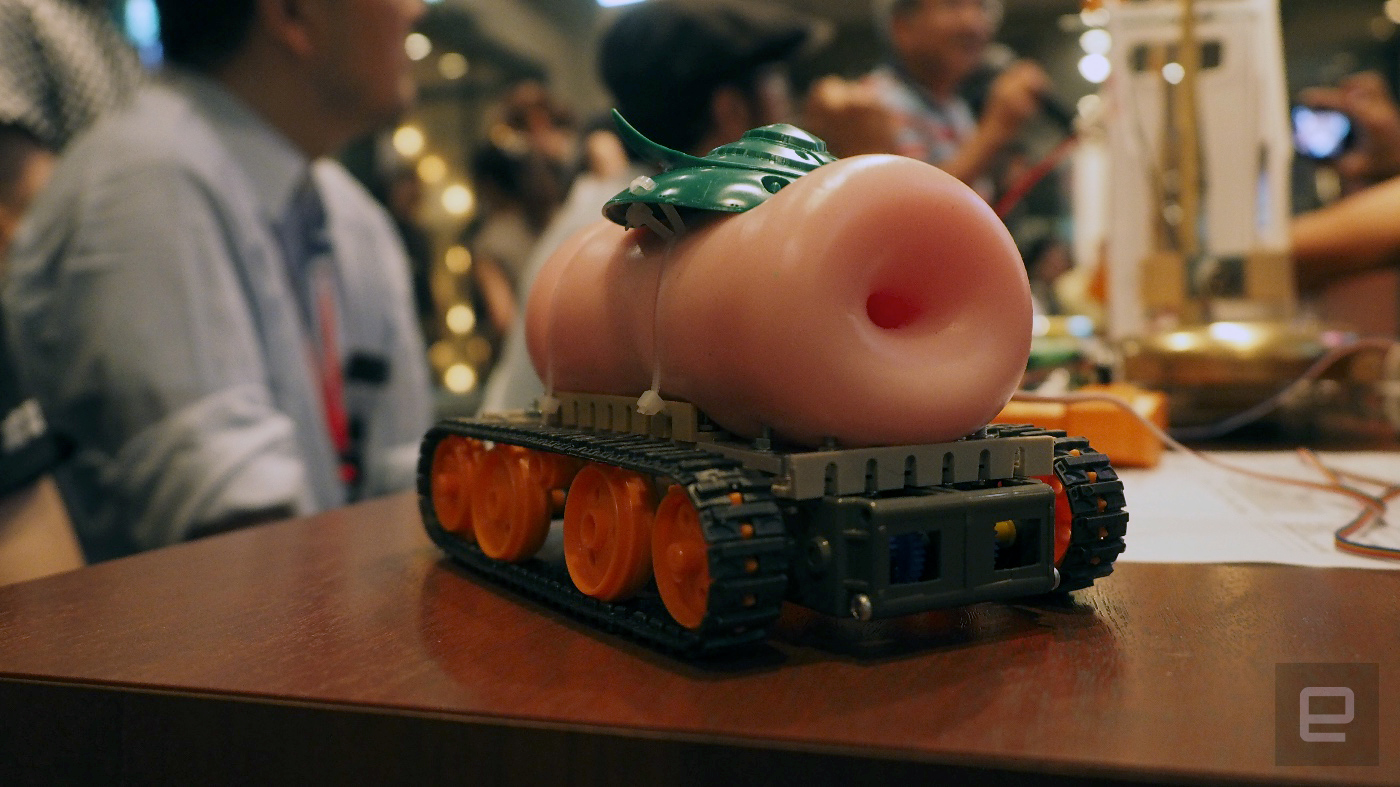 This glorified sex toy on wheels was short on detail and barreled around the arena with speed. Maker Lin Yin-Chun came across from Taiwan, and it wasn't his first Hebocon. I'm not sure if it's more shameful to be beaten by a sex toy, or to enter one into a robot competition in the first place. 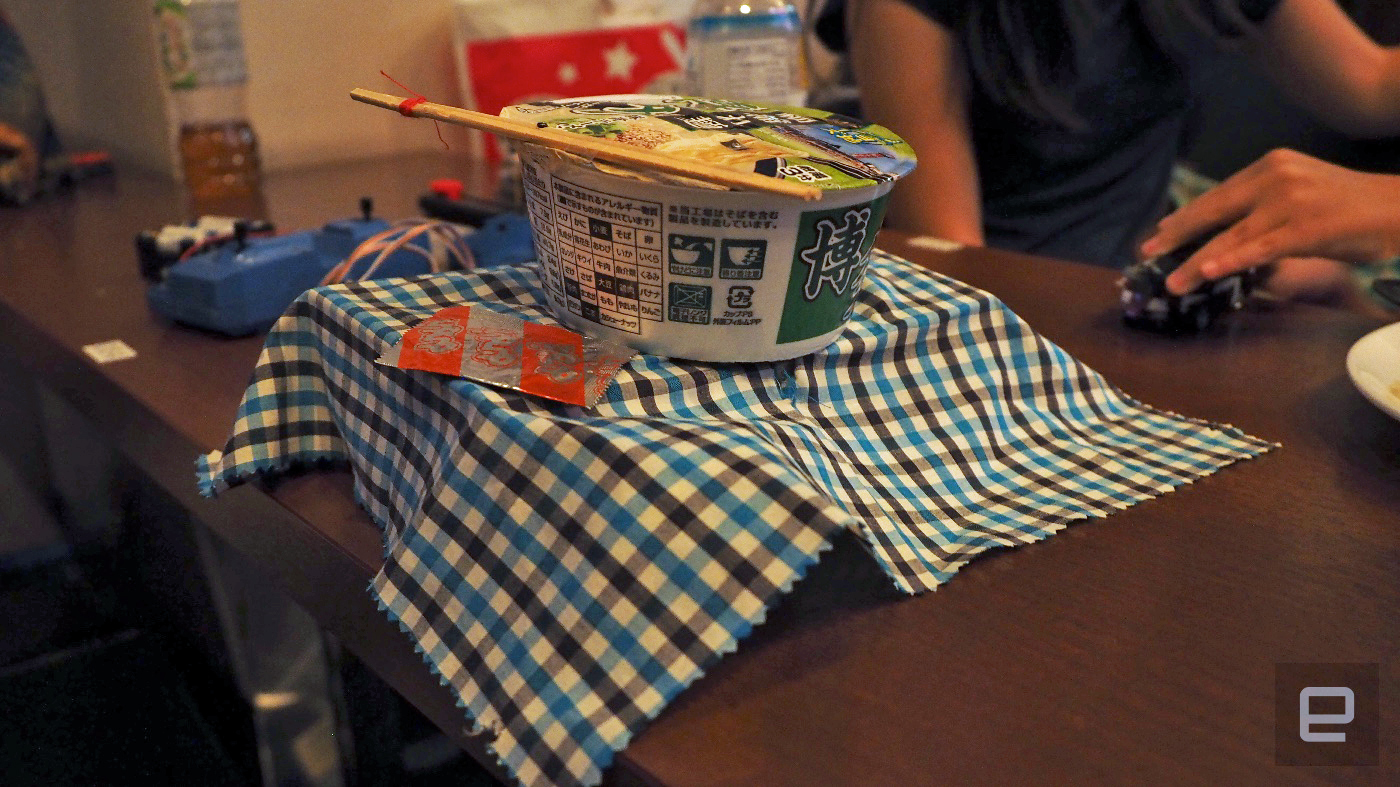 "King of Cup Noodle" is, as the name suggests, mostly a cup noodle with a robot attached. Housed inside, alongside motors usually found in toy kit sets, there's a secret hand that attempts to punch its enemy. In later stages, the competition turned into messy four-on-four Battle Royale matches.The best way to describe these: spectacle. King of Cup Noodle fell to multiple attackers. 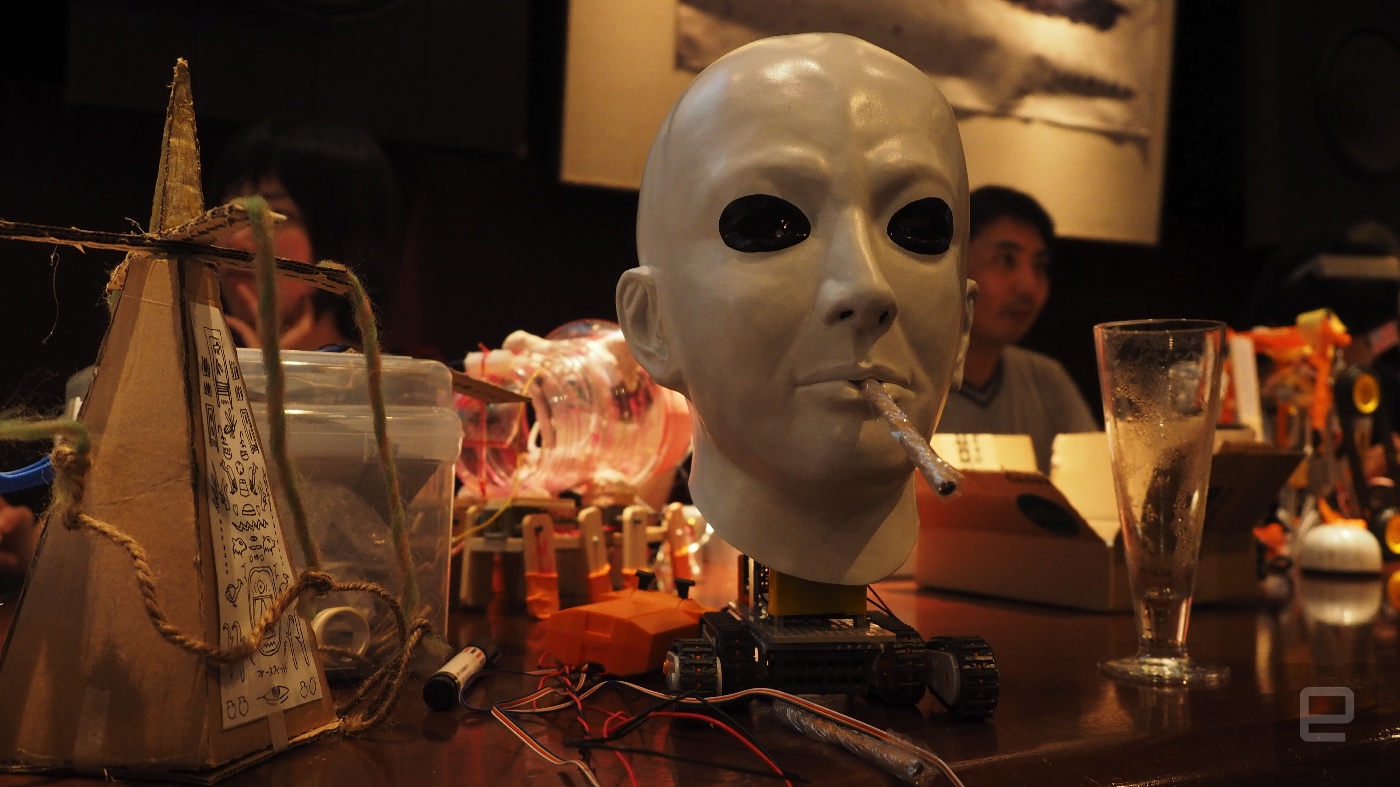 University student Zuni's creation was "inspired by AI," but it's not all that intelligent. The pocky snack sticking out of its mouth is how it attacks its rivals, but its true purpose is to meet other robots and "understand love." Apparently, this is a crappy robot with a backstory. And a creepy face. 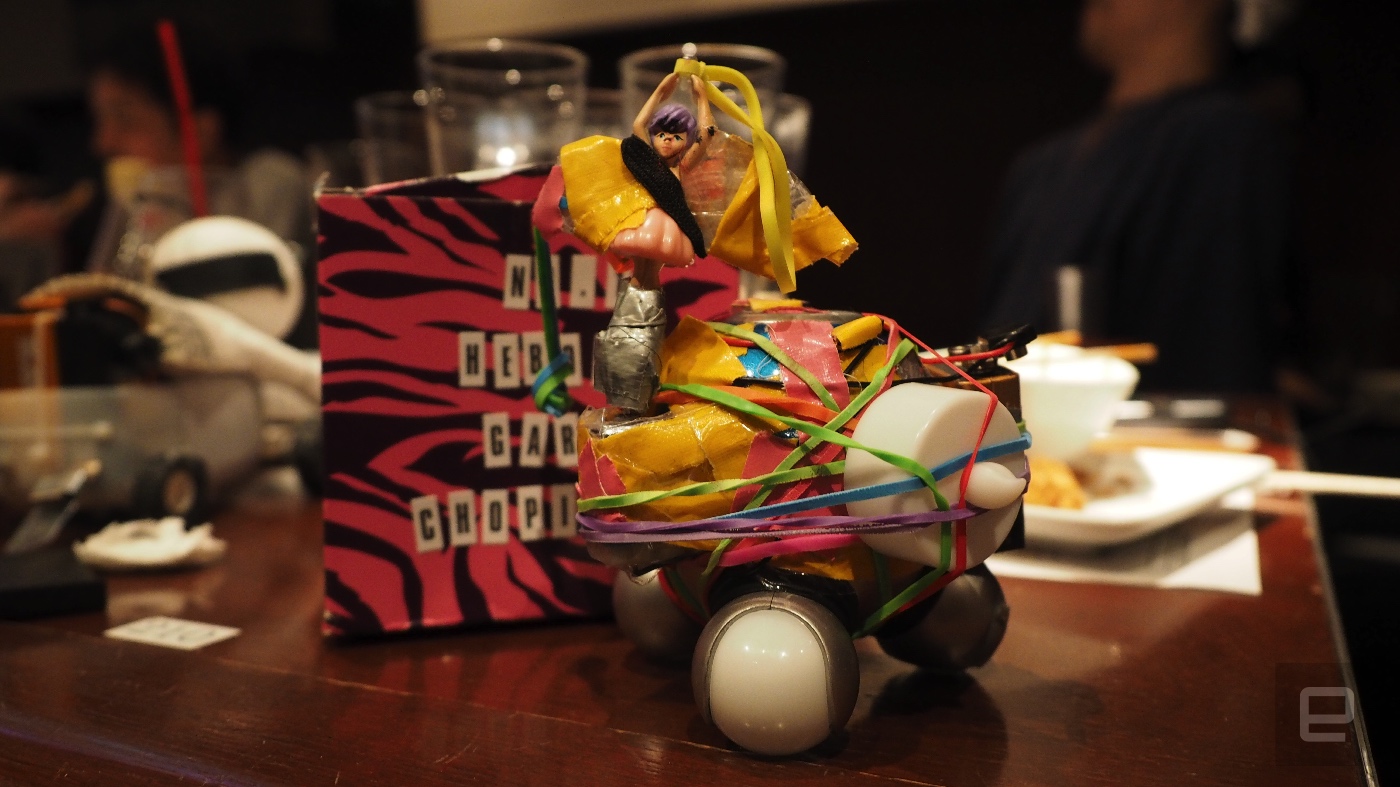 From Iceland, the Gary Chopin robot is a repurposed Happy Meal toy, with attachments meant to "bitch slap" its rivals -- a motor attached to the toy, which spun, swinging a mace made from rubber bands and plastic. Once the robot was switched on, it was left to luck: There are no other controls. The team managed to claim second place in a Hebocon competition back home, so this was their second battle. Gary looked worse for wear by the end of it. 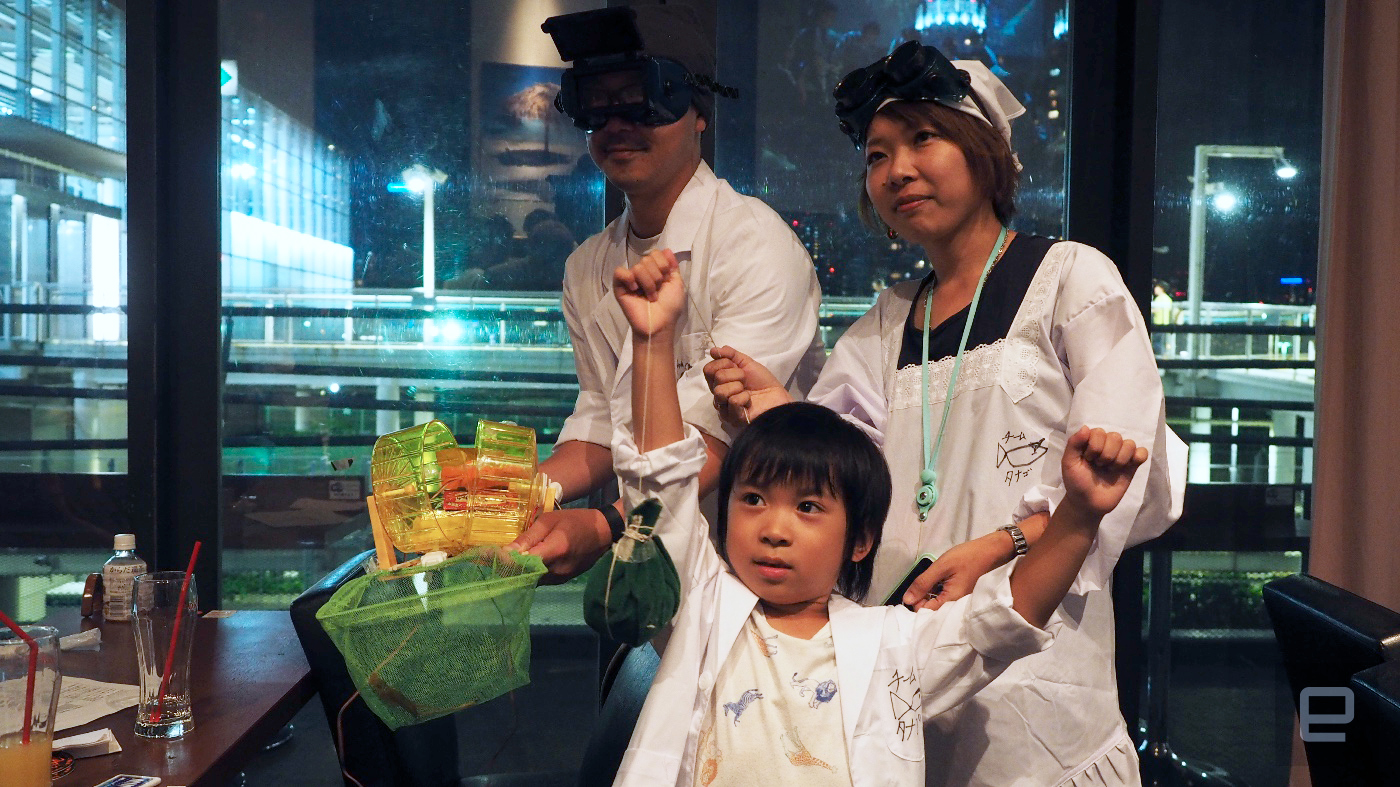 Team Tanago's robot combined a fishing net, hamster wheel and the repurposed, vibrating heart of some poor stuffed toy. Helmed by Ichiyoshi, the 7-year-old son of the family/team, the robot went far in the competition, despite the erratic vibrating core -- the not-so-secret weapon -- going off at the worst possible times. Ichiyoshi's mother explained that the robot was powered by familial bonds. I saw batteries. 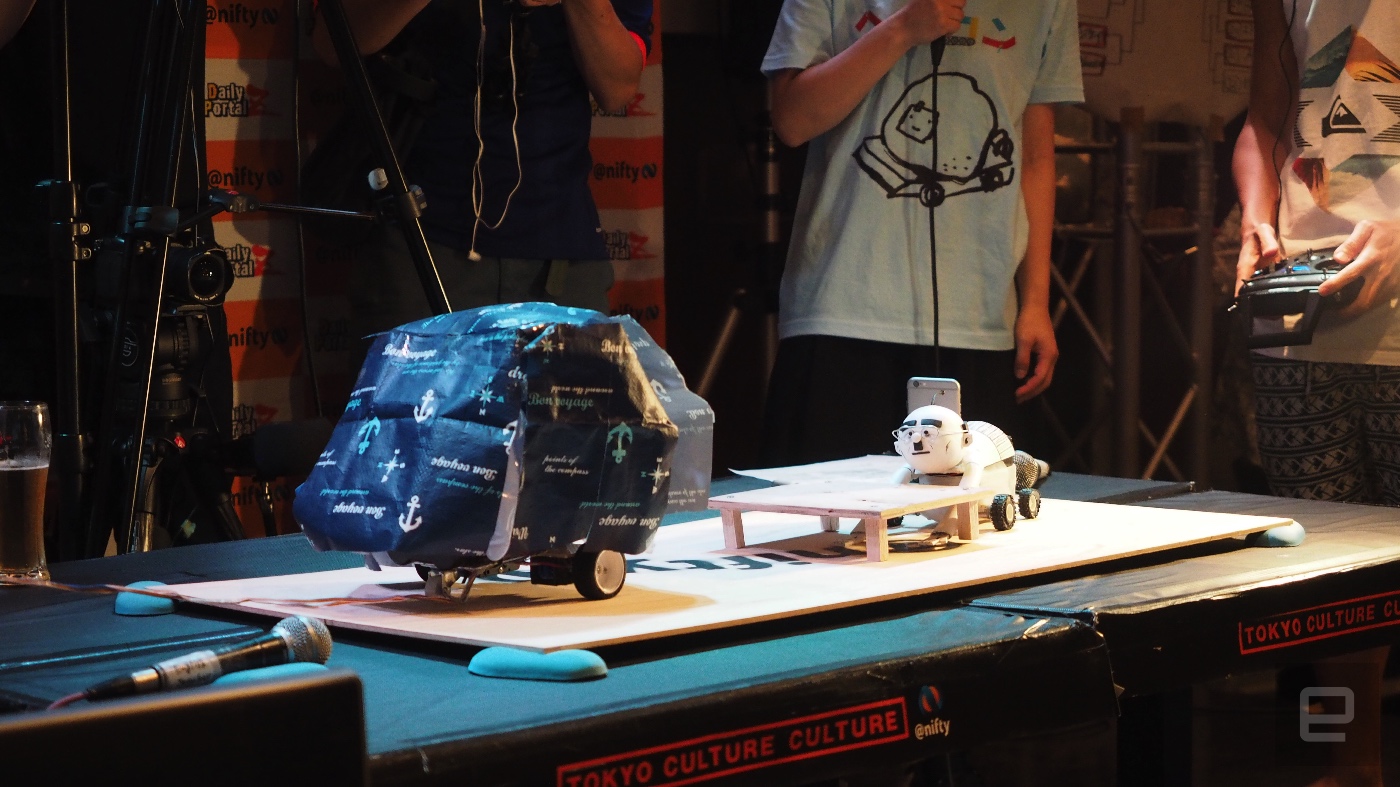 Unagorilla's Growing Robot kept itself covered until the middle of its first match. The surprise? A giant inflatable dolphin that grew out from it during the match. The surprise (or the sheer amount of space the toy took up in the fight arena) allowed it to progress to one of the battle-royale finales, where it didn't have time to inflate before tumbling out of the ring. 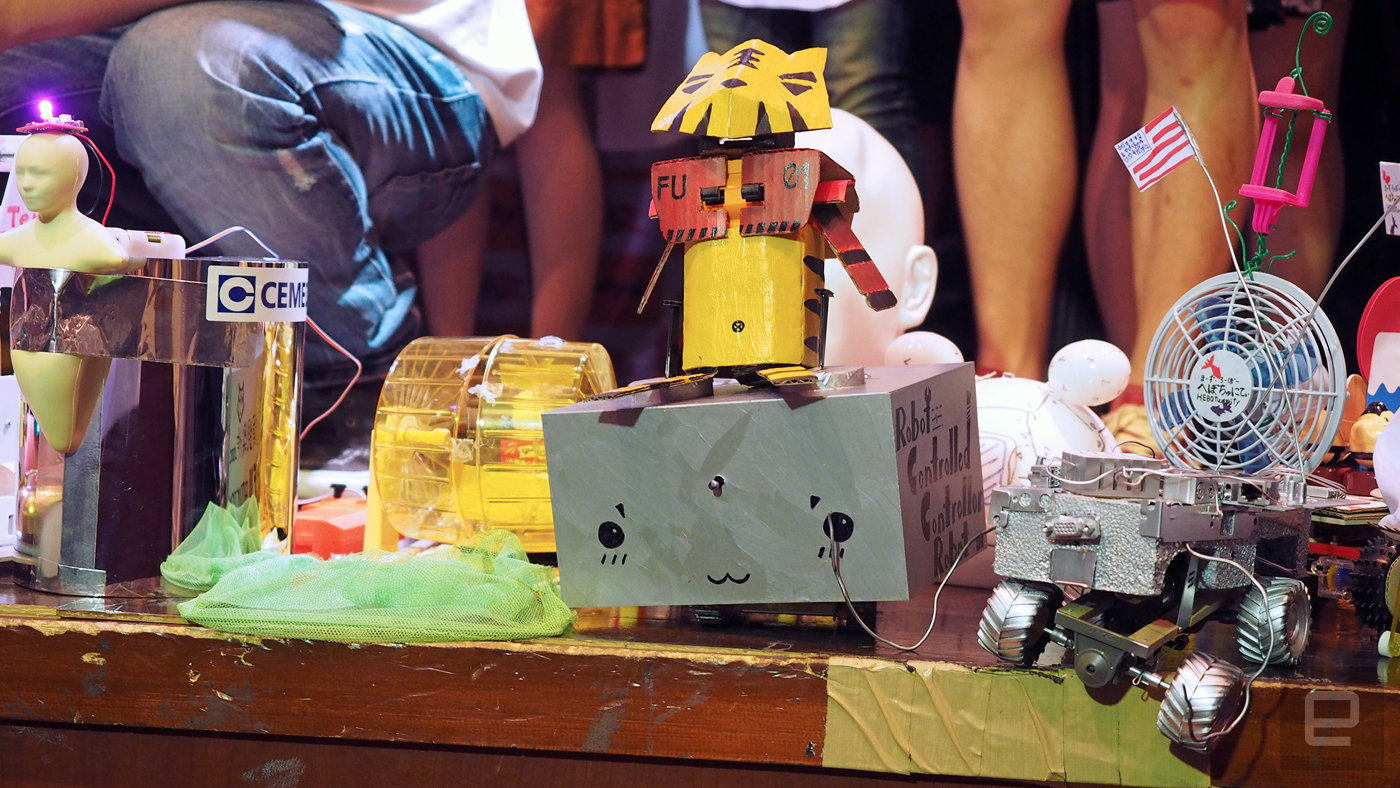 Hebcom isn't like the Olympics. At all. In fact, no one is looking to win or crush the competition. There was a great atmosphere of camaraderie as the matches happened: victors often claim a component from their defeated adversaries, attaching them like some grisly hood ornament. Typically, these never added anything good to the robots, often weighing them down more and making them topple under their own weight in later matches. As Hebocon's official site puts it best: "True Happiness can only be achieved through fighting hard, and then losing."

If you're not the best of the worst, then you're the worst.

No one embodied this spirit better than the eventual, begrudging winner, Ricky Chan from Hong Kong, with his Robot Controlled Controller Robot. After bowing and apologized for his win -- hilarious enough in itself -- he said he had placed second twice in his home country, and explained that coming in second is the most heboi of places. If you're not the best of the worst, then you're the worst. He agreed it was time someone else got the sweet taste of almost-victory.

In this article: badrobot, crappyrobots, culture, entertainment, hands-on, HEBOCON, japan, nifty, robots, science, video
All products recommended by Engadget are selected by our editorial team, independent of our parent company. Some of our stories include affiliate links. If you buy something through one of these links, we may earn an affiliate commission.