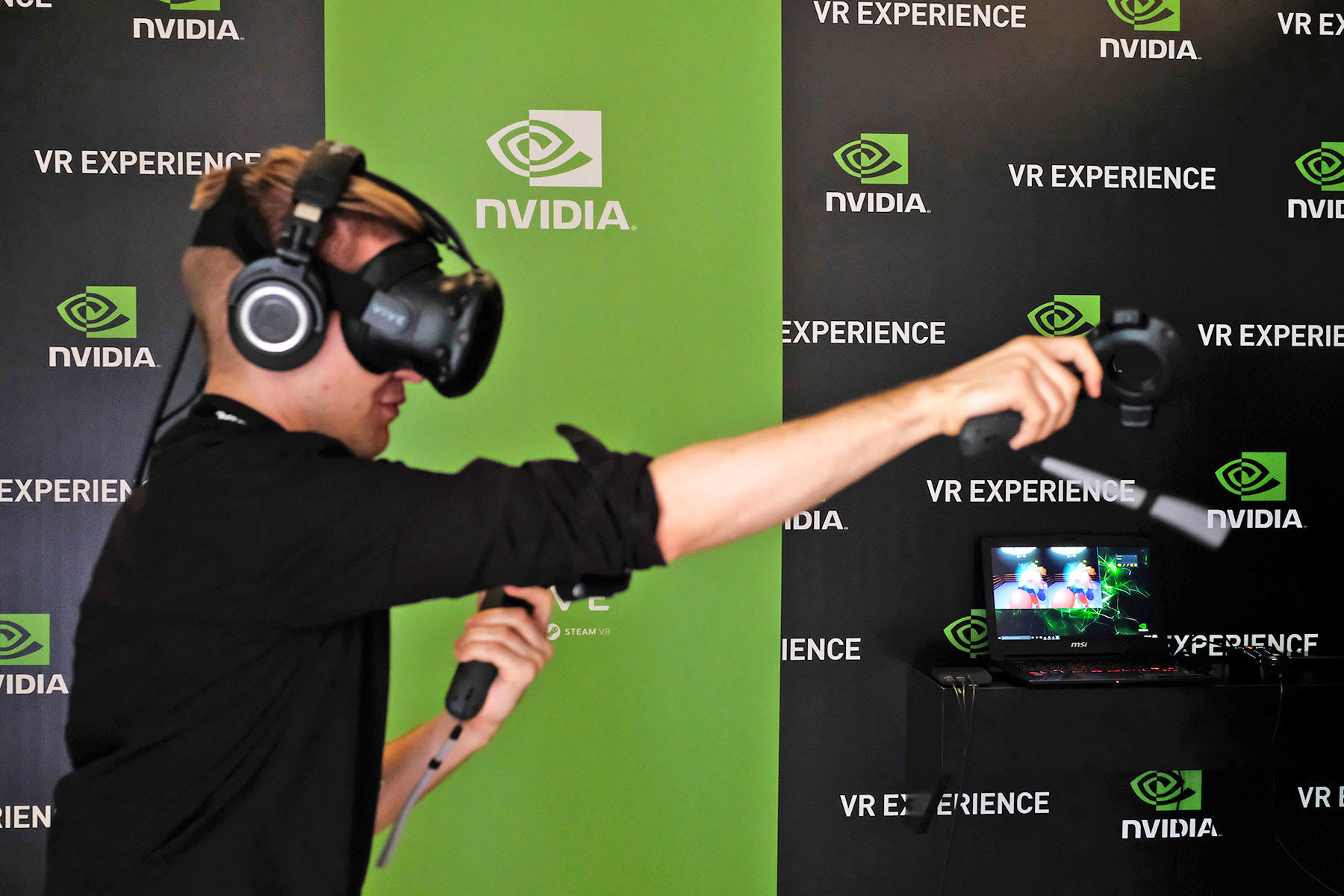 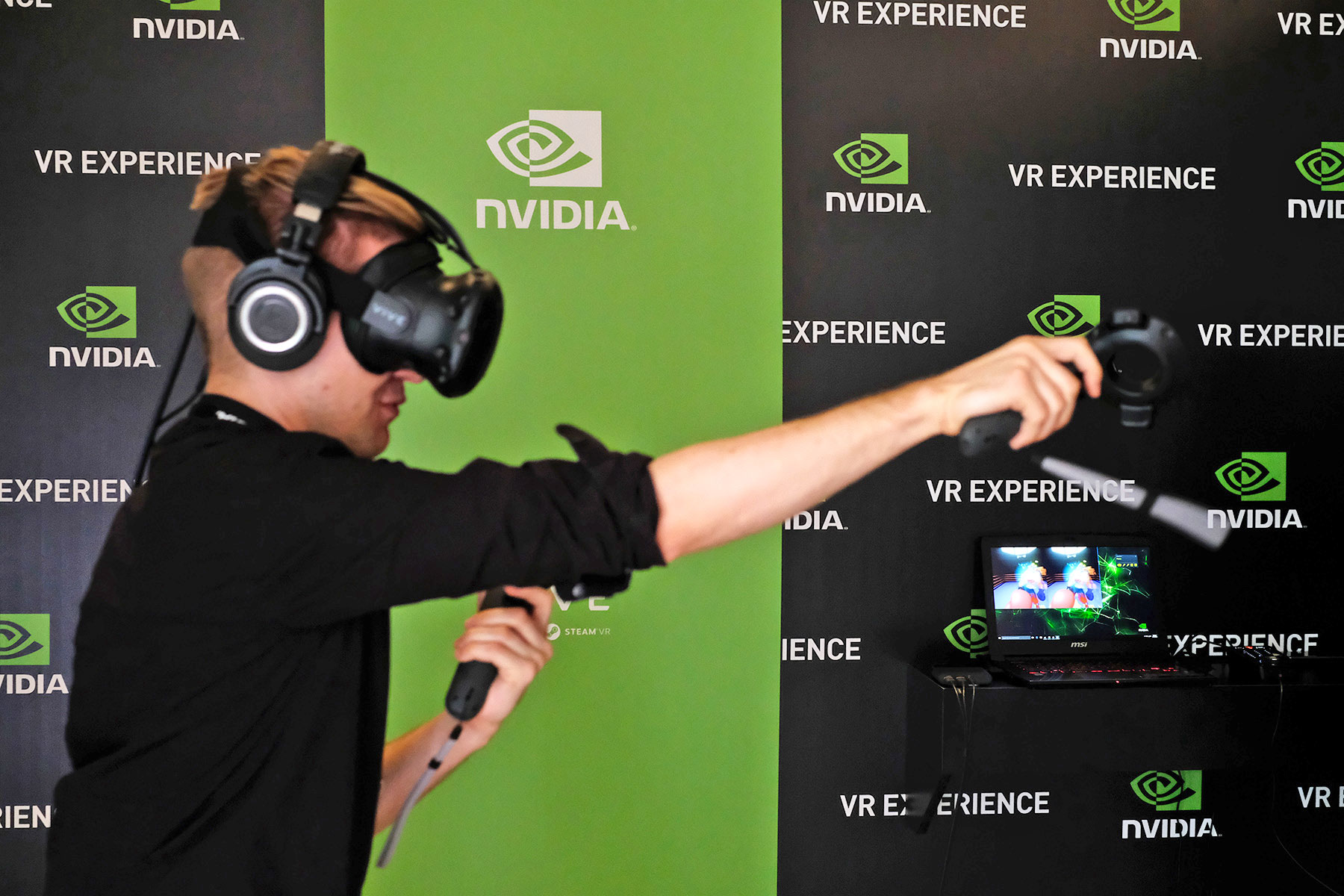 Nvidia has just taken the wraps off a trio of laptop GPUs based on its new "Pascal" chip architecture, the GeForce GTX 1060, the 1070 and the 1080. While the 1080 is by far the most impressive, it's the humble 1060 that could make the biggest impact on the market. Why? Because it facilitates using a virtual reality headset like the HTC Vive or the Oculus Rift on a reasonably small laptop.

The 1060 essentially replaces the 970M, insomuch as it'll fit into the same sort of products as the older chip. All of the technologies launched for the Pascal architecture, including VRWorks and Ansel, are supported on the 1060, which has 1,280 CUDA cores, 6GB of 192-bit, 8Gbps memory and a base clock speed of 1,404MHz. The end result of these specs is a "VR-ready" chip that'll fit in laptops as svelte as 18mm, like the Razer Blade.

What exactly "VR ready" means nowadays is a bit of a mystery. Oculus and HTC released their headsets targeting the desktop GTX 980, but both AMD and NVIDIA have since released cheaper desktop cards (the RX 480 and the GTX 1060, respectively) that both claim to play nice with VR.

At a launch event in the UK, NVIDIA showed off the mobile 1060, 1070 and 1080 paired with various VR games. But while the more powerful chips were demoed with graphically intense games, NVIDIA chose The Thrill of the Fight. It's a very fun, but relatively undemanding title, requiring only a desktop GTX 970 card. The MSI GS43 (an updated GS40 with a 1060 GPU inside) handled it perfectly. For regular gaming, NVIDIA claims it'll do just fine. The same MSI GS43 hit 96.4FPS in Doom (1080p, ultra settings), 51.4FPS in The Witcher 3 (1080p, maxed settings, HairWorks disabled), and 71.5FPS in Tomb Raider (1080p, very high). Older games can play nice with higher resolutions, with BioShock Infinite hitting 72.4FPS at 1440p, and Middle-earth: Shadow of Mordor hitting 62.1FPS, both with "ultra" settings.

When pressed, representatives at the event said the notebook 1060 is VR-ready, and agreed that a stable "90 frames-per-second is a must for VR," but "you might need to play around with the settings, as you would on any PC game, in order to reach that." That suggests that while, yes, the 1060 has the power to run the current crop of VR games, don't expect to be playing with Ultra graphics settings. NVIDIA also cautions that the "VR-ready" status is only when you're plugged into an outlet -- when running from the battery it won't reach the clock speeds necessary. Digging into NVIDIA's official benchmark sheet (which doesn't compare the two directly), it seems that the 1060 is basically on par with the GTX 980, which makes the decision to restrict demos to such a forgiving game a strange one.

Putting minutiae to one side, NVIDIA's new laptop GPUs look like winners. The 1080 almost kills the need for laptops with desktop chips in them (although I'm sure the market will continue). It'll support SLI, and even on its own, can maintain 60fps in 4K for all but the most-demanding of titles, and 120Hz gaming in 1080p as well. The 1070 will be the go-to option for gamers without $1000s to spare, sliding into any laptop that currently houses a 980M -- think something like the Asus ROG G752, the Acer Predator 15, or the Origin EON 15-X. But it's the 1060 that offers the most exciting proposition, to me at least. Laptops like the Razer Blade, the MSI GS40 Phantom and the Gigabyte Aorus X3 Plus are already combining portability with legitimate gaming chops. Now, newer versions will also be able to support VR.

In this article: 1060m, gadgetry, gadgets, gaming, gear, geforce, geforcegtx1060m, gtx, htc, nvidia, oculus, rift, vive, vr
All products recommended by Engadget are selected by our editorial team, independent of our parent company. Some of our stories include affiliate links. If you buy something through one of these links, we may earn an affiliate commission.