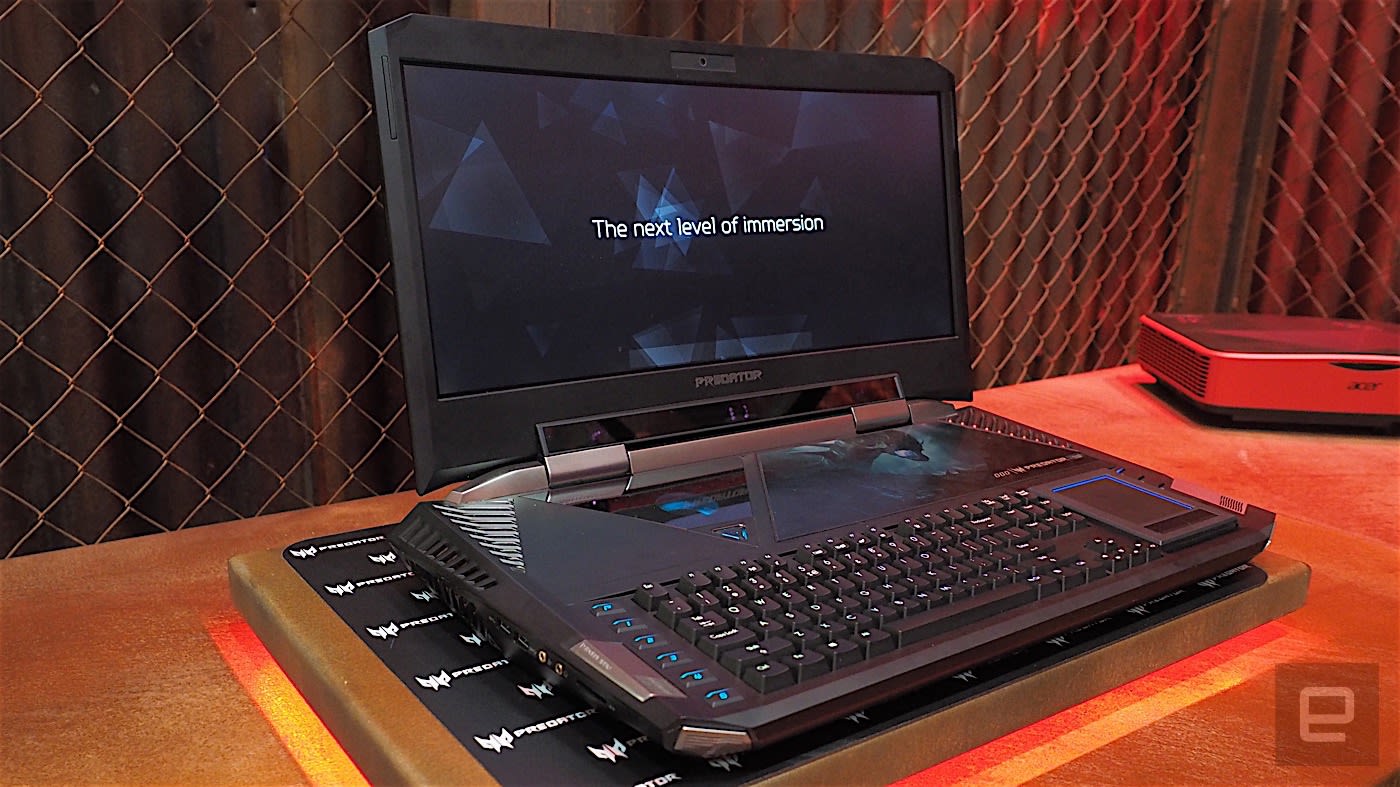 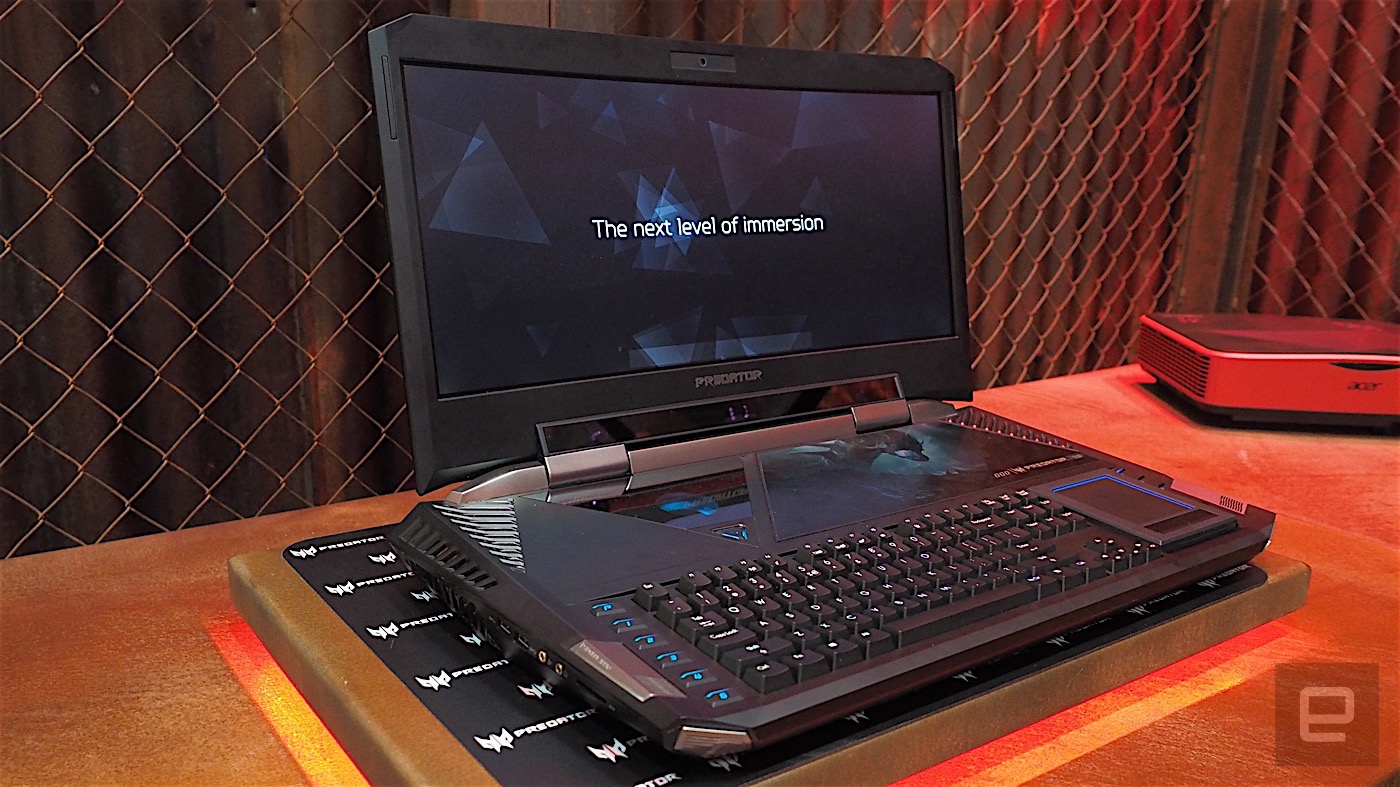 Acer's made gaming laptops before, but none of them are quite like this. The behemoth you see here is the Predator 21X, which is the most redonkulous notebook I've seen in my life. The term desktop replacement is quite literal here, as it has a massive 21-inch curved display. Indeed, it's apparently the world's first laptop to have such a distinction. And if that isn't ridiculous enough, it actually has two NVIDIA GeForce GTX 1080 graphics cards with SLI under the hood. Two. 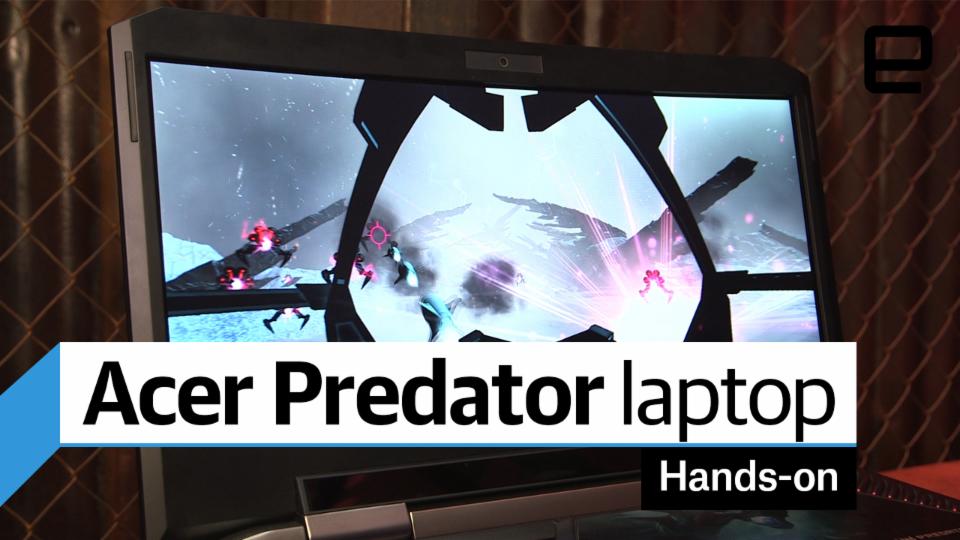 I checked it out here at IFA and it looks even bigger in person, if you can believe that. It is simply massive. An Acer spokesperson even told us it weighs a whopping 8 kg (17.7 pounds). Still, that giant screen with its 2,560 x 1,080 resolution does do a lot to immerse you in gameplay, and I can see it being used to watch movies as well. But the insanity doesn't stop there. Underneath that massive display is Tobii's eye-tracking tech, which lets you simply look at an enemy target to aim rather than having to fiddle around with a mouse or keyboard. I had a go at it after a brief tutorial, and I have to admit it was pretty fun to just press a spacebar to fire rather than having to deal with the WASD keys as well.

Speaking of that keyboard, the Predator 21X is equipped with rather gorgeous mechanical one, complete with Cherry MX switches and RGB illumination. It was a joy to type on, and I can see its appeal to those who love the feel of clicky keys. What's more, the trackpad on the Predator 21X actually transforms into a number keypad -- you simply turn it over to go from number puncher to hardcore gamer (and vice versa). It's a feature we've seen before, but it's still cool to see it here. The Predator 21X is a giant in specs as well as in size. Along with those two NVIDIA cards, it also has the latest 7th-generation Intel Core processor, a 4.2-channel audio system with Dolby Audio support and 5 system fans, three of which are AeroBlade metal models for even better cooling. There was no specs given regarding battery life, but there's no way you'd want to leave this without power for long anyway.

Pricing and availability is still yet to be determined, but Acer tells us it should start shipping early next year. Still, we bet something like this will likely cost more than your average gaming rig. Better start saving your pennies now.

In this article: acer, gaming, ifa, ifa2016, laptop, personal computing, personalcomputing, predator, predator21x
All products recommended by Engadget are selected by our editorial team, independent of our parent company. Some of our stories include affiliate links. If you buy something through one of these links, we may earn an affiliate commission.