We knew it was coming, and now it's here: Apple's newest MacBook Pro. It's thinner, it's lighter and it comes with a better screen than the Pros of yesteryear. But, given how much of the company's presentation was dedicated to it, the showstopper for the new MBP is a truly unique hardware feature in the world of computing -- an OLED screen embedded in the keyboard called the Touch Bar. 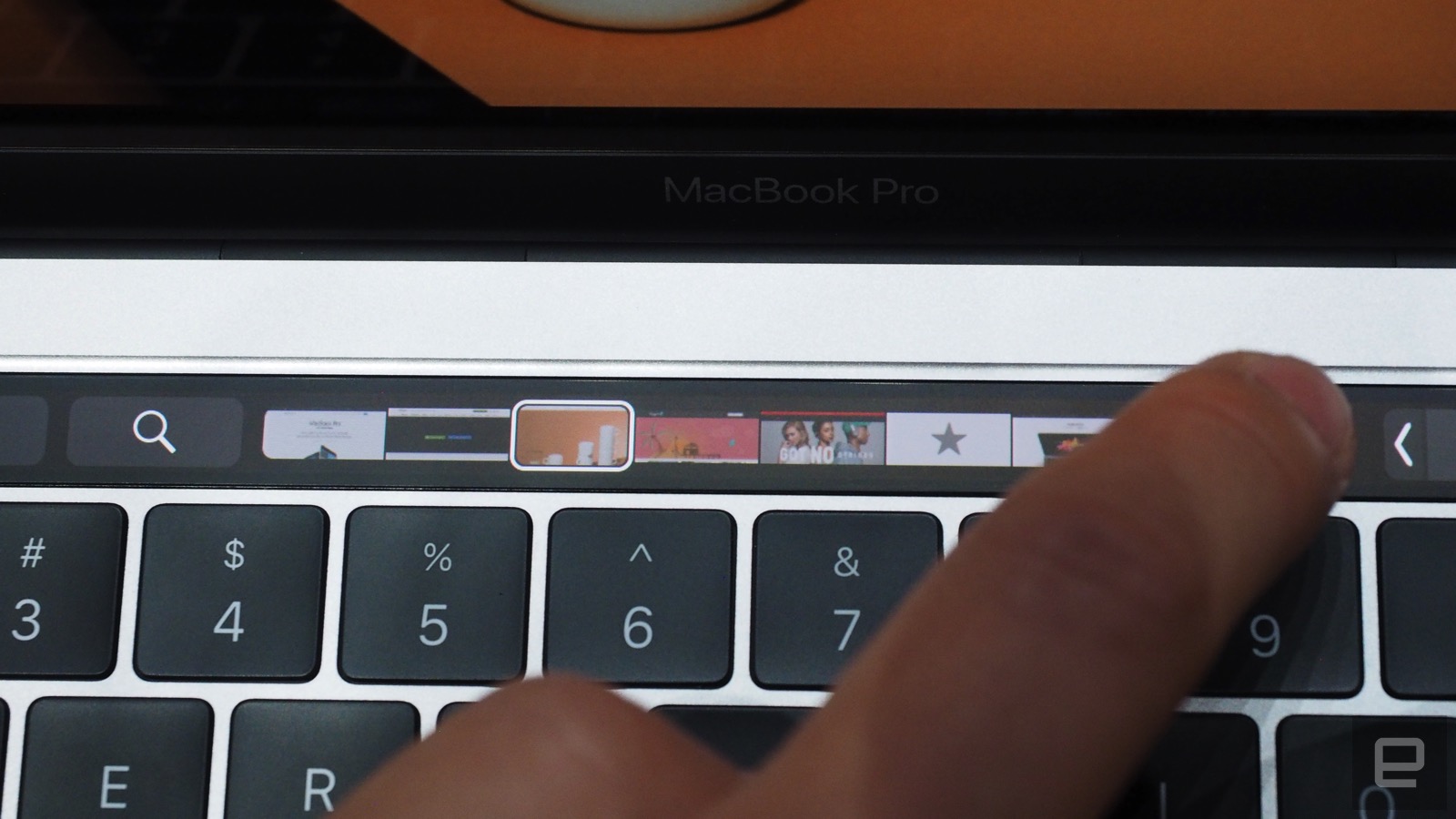 That sliver of screen eliminates the hard function keys we've been saddled with for years in favor of infinitely customizable and contextually aware software-based inputs instead. At first blush, it looks like it'll be quite the useful feature for creative power users, which is why Apple spent so much time in the keynote showcasing its uses for photo and video editing and music making, among others. Plus, at the right edge of that strip lies a Touch ID sensor that allows folks to log in to their Macs via their fingertips or use Apple Pay as needed. In the limited time I spent with the new Pro, the sensor worked as promised -- which is to say, considerably faster than typing in a password.

As for using the Bar itself? Well, there wasn't much I could do today in my quick demo except for scroll through webpages, apps and photos, and for those tasks it worked well. For such uses it strikes me as more of a novelty than anything particularly useful, though it was nice to be able to use the full screen while scrolling through images. Seems to me that the Bar's usefulness will depend greatly upon individual user preference and software makers -- you can see the potential of such flexible inputs, but it's up to developers to craft compelling use cases. 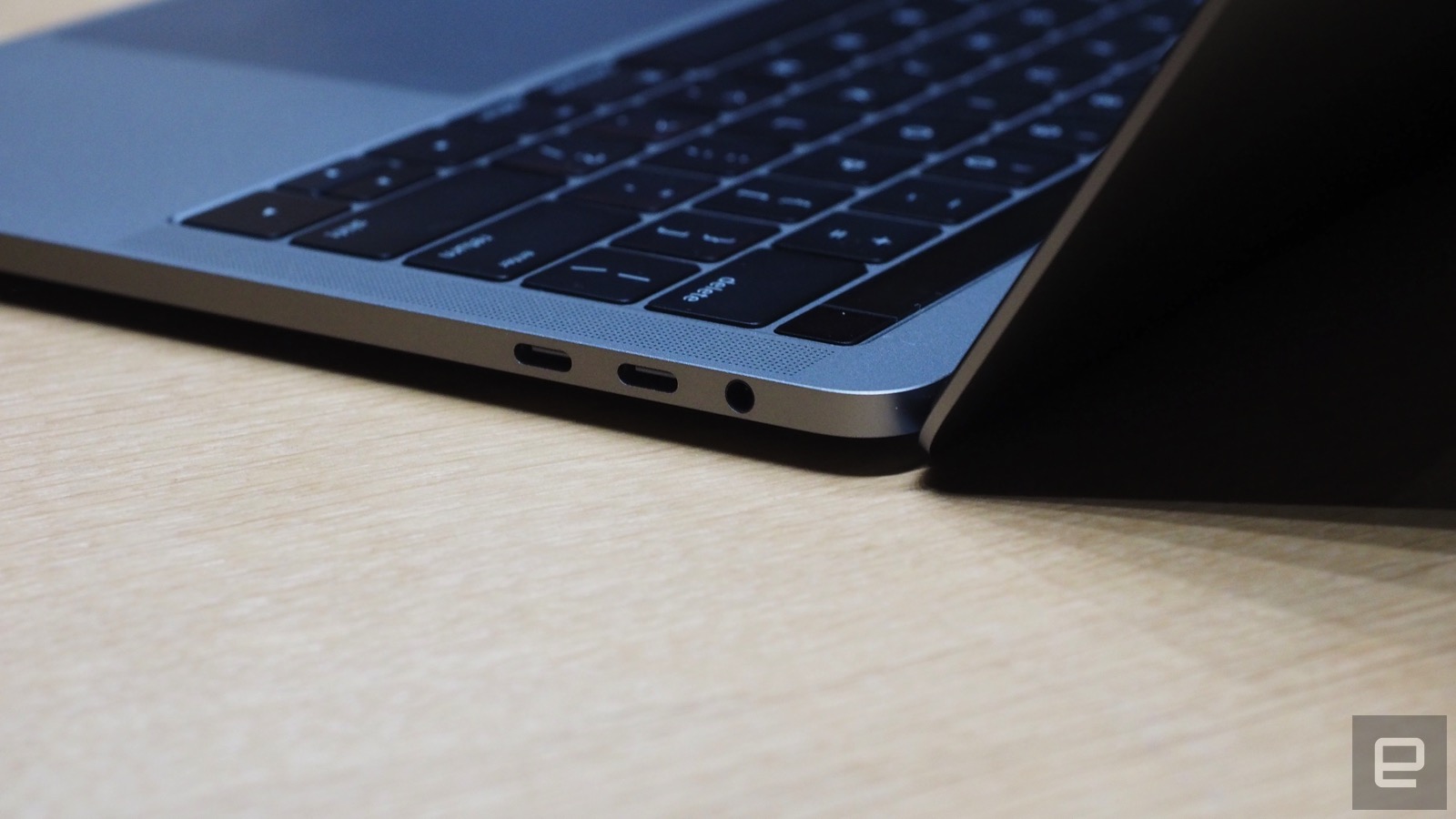 Aside from the Touch Bar, the laptop itself is an engineering marvel. It feels supersolid, like it was carved from a slab of aluminum, and I'm particularly enamored of the space-gray finish. The keyboard is akin to the one found in MacBooks, only it's designed with a bit more key travel -- though I'll be honest, it felt indistinguishable to my fingertips. Which is to say, it's a clicky, accurate set of keys, though I still prefer the lengthier keystrokes you get on the old MacBook Pro and current Air. I also am compelled to say that it's remarkable how Apple managed to cram fully fledged MBP internals into a chassis that weighs even less than a MacBook Air -- I held my Air in one hand and the new 13-inch Pro in the other, and I couldn't tell a difference. The 15-inch version is a bit heavier, of course, but it's still relatively svelte considering how powerful it is.

And I can't discuss the hardware without mentioning the new screen. The wider, P3 color gamut it displays isn't something that most civilians need, but it is a noticeable upgrade when you see the difference side by side. As my colleague Dana Wollman pointed out in her iMac 4K review last year, which supports the same P3 color range, colors really are richer and more vibrant, particularly with warmer colors -- reds and yellows in particular.

You can order the new MacBook Pros starting today, with a standard model (read: no Touch Bar) available now for $1,499, while the Touch Bar equipped 13- and 15-inch models will set you back $1,799 and $2,399, respectively. You can get a standard model in store tomorrow, while the others won't ship out for two to three weeks. Patience is a virtue, y'all.

Click here to catch all the latest news from Apple's "Hello again" event.
In this article: apple, applefall2016, gear, hands-on, MacbookPro, macbookpro2016, video
All products recommended by Engadget are selected by our editorial team, independent of our parent company. Some of our stories include affiliate links. If you buy something through one of these links, we may earn an affiliate commission.