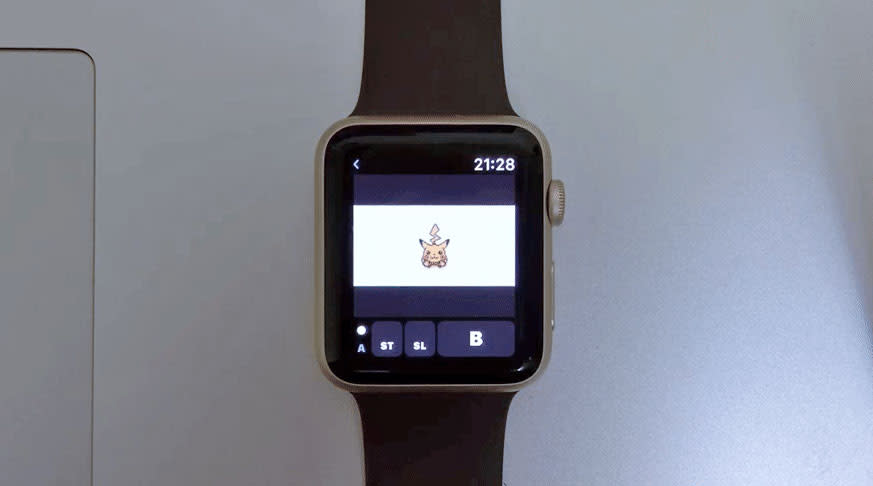 The last place you'd probably want to play a video game is on an Apple Watch. The wearable has a tiny screen, almost no buttons and can only be operated with one hand. It's a completely impractical gaming device, but developer Gabriel O'Flaherty-Chan made a Game Boy emulator for it anyway.

Named after Pokémon's Giovanni, the wrist-worn Game Boy emulator crams Nintendo's original gaming portable into an Apple Watch Series 2. It doesn't quite play games at full speed, but it is fully functional. On-screen buttons underneath the game display let users tap in start, select and B button inputs, and swiping up, down, left or right emulates the d-pad inputs. Want to press the A button? Just tap on the right side of the watch's face.

The project is a fork of Gambatte, an existing Game Boy emulator -- but O'Flaherty-Chan says it wasn't an easy port. Apple's WatchOS didn't use any of the graphics standards the original emulator relied on, and was never really meant to play complex games. Still, the project is a neat proof of concept, albeit one that will never see full support on the App Store. Still, if you want to check it out for yourself, hit up the GitHub link at source link below. Giovanni is open-source, after all.

In this article: apple, Apple Watch, applewatch, av, emulator, gameboy, gaming, nintendo, nintendogameboy, pokemon
All products recommended by Engadget are selected by our editorial team, independent of our parent company. Some of our stories include affiliate links. If you buy something through one of these links, we may earn an affiliate commission.