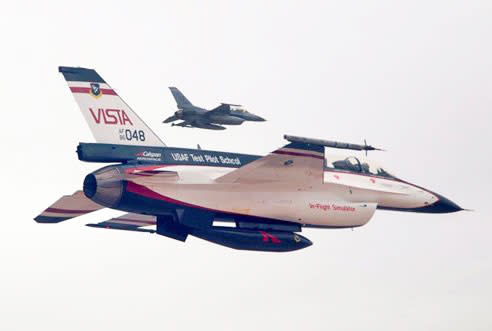 There's so much focus around autonomous cars these days it's easy to forget that the military's trying to plug artificial intelligence into fighting vehicles, too. And not just in computer mock-ups, like last June's exhibition wherein a flight AI beat a retired USAF Colonel in simulated dogfights. In a recent test, military contractors used an unmanned system autonomously flying an F-16 combat jet as a wingman to support a human pilot in a separate aircraft. The system successfully met its goals to adapt, plan and execute maneuvers all on its own.

The two-week demonstration, Have Raider II, was the second in a series of tests run by key players in the aerospace industry, including Lockheed Martin, Skunk Works and the Air Force Research Laboratory. The first exhibition focused on keeping the autonomous F-16 flying in formation as a wingman, while the recent tests pushed the self-flying plane to react to changing threats during an air-to-ground strike mission and calculate new plans on the fly. Tech developed for this recent battery of tests will allow the autonomous system's operators to insert new software components that will improve its flexibility.

This is a big step in Loyal Wingman, a program dedicated to building a system to pilot autonomous planes that operate as wingmen to human pilots. Crucially, the unmanned aircraft are directed by the lead aviator, not ground control. This setup lets the human pilot offload some cognitive workload to their AI partners to preserve brainpower for mid-flight plans and mission management -- assuming the computer doesn't go rogue like all the bad sci-fi films predict.

In this article: AirForceResearchLaboratory, autonomous, AutonomousFlyingRobots, f-16, gear, LockheedMartin, military, security, SkunkWorks
All products recommended by Engadget are selected by our editorial team, independent of our parent company. Some of our stories include affiliate links. If you buy something through one of these links, we may earn an affiliate commission.