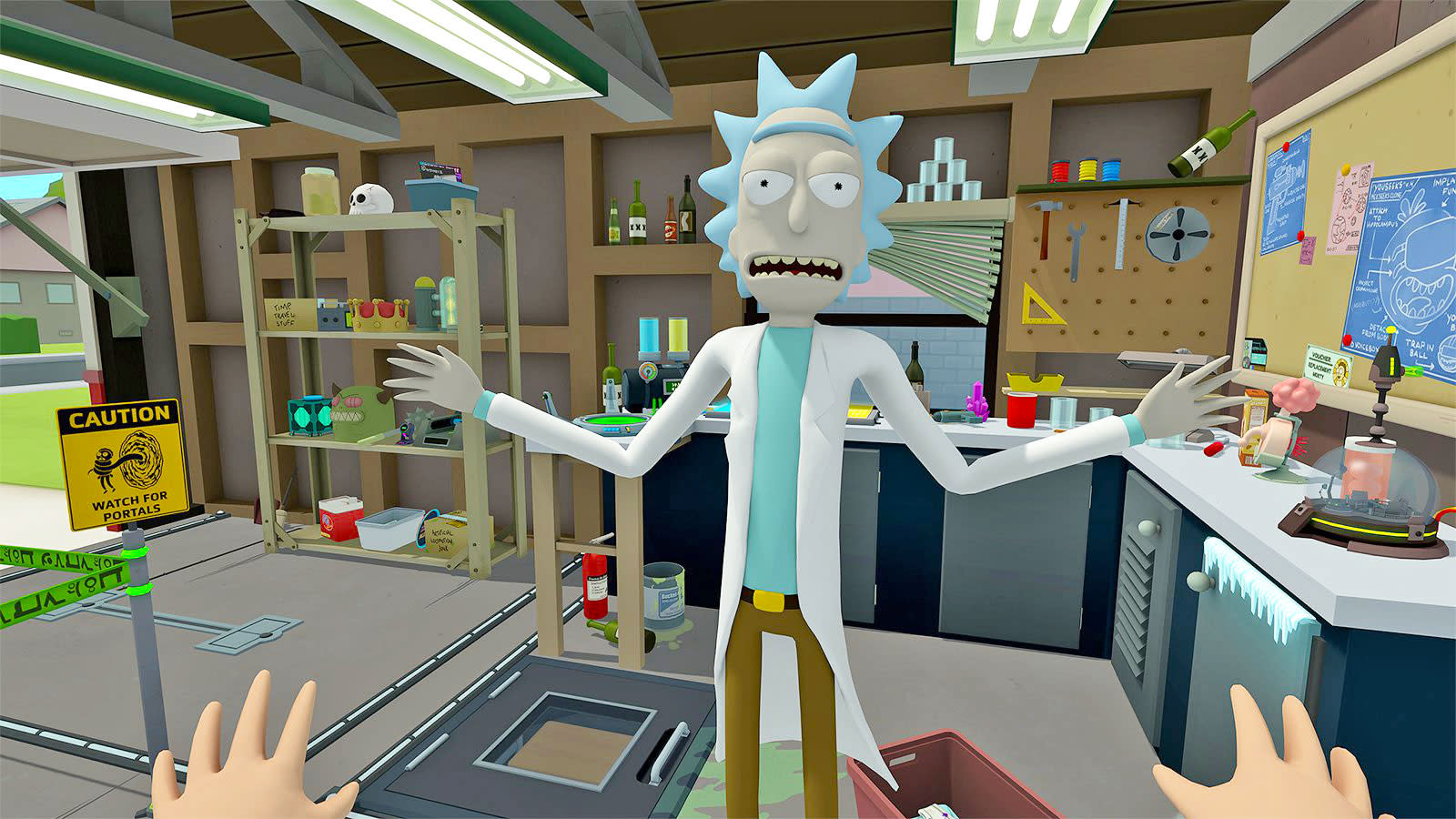 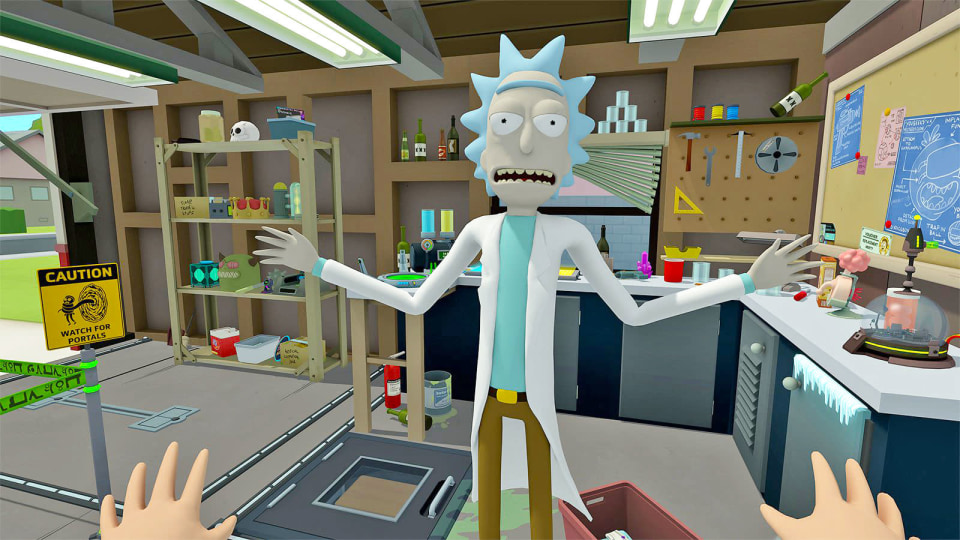 Rick and Morty is one of the funniest shows on television -- and it's also one of the weirdest. Co-created by Justin Roiland and Dan Harmon (Community), the series is like a demented spin on the Doc Brown/Marty McFly relationship from Back to the Future. Rick Sanchez is a dimension-hopping alcoholic genius who's the grandfather to Morty, a nebbish kid who's always in over his head. Comedy! While I was initially worried that the show's first VR experience, Virtual Rick-ality, might not live up to the series' wildly inventive attitude, it didn't waste much time proving me wrong.

The game puts you in the role of a lowly Morty clone who's initially created just to do Rick's dirty laundry. That menial task serves as a cheeky way to learn how to interact with the environment, a loving recreation of Rick's garage lab. You'll notice plenty of callbacks to jokes from the show, but you won't get much of a chance to explore them at first. For the task at hand, all you need to do is throw the dirty laundry into the washer, add some detergent, and you're done. If you start fumbling and take too long, Rick and the actual Morty won't waste any time berating you.

Eventually you're tasked with retrieving an intergalactic delivery using a clone of Mr. Meseeks -- a character that's originally introduced in the show, but serves a very different purpose here. It exists purely to mimic all of your movement in VR, and it comes out of a device resembling a Poke Ball from Pokemon. Since you can throw that device anywhere, the clone ends up being a smart way to interact with objects outside of your virtual play space. And, after playing plenty of VR games, its ability to mimic your movements feels very original.

Throughout Virtual Rick-ality, you'll notice plenty of mechanical similarities to the popular VR title Job Simulator. Both games were developed by Owlchemy labs, after all. Instead of flipping burgers, you're given jobs befitting the weird world of Rick and Morty. The mere act of recharging a battery becomes an exhausting battle to turn dials, flip switches and pull levers. It's a bit infuriating at first (especially if your VR setup has tracking hiccups), but eventually I got into the flow of the puzzle.

I played the game using an Oculus Rift with Touch Controllers, and it was a mostly pleasant experience. I could only play it in a small area, but Vive users can also play it with room-scale tracking, which gives you a bit more freedom to walk around the virtual environments. Since you're spending much of the time teleporting around and grabbing objects, Virtual Rick-ality isn't very intense. Instead, it's more focused on the little details, like recreating the interface for Rick's computer, or developing a complex puzzle to fix Rick's spaceship.

Audio cassettes scattered throughout the world also hide short sketches between Rick and Morty, which are particularly entertaining if you're a fan of Roiland's voice work (he portrays both characters). And speaking of voice actors, you'll also hear from the actors playing Morty's sister Summer (Spencer Smith) and father (Chris Parnell). Together with a strong script, I often felt like I was actually living through an episode of the series, drunken profanity and all.

The one downside of Virtual Rick-ality: It's clearly a game made for fans, which might make some players feel left out. Why is Rick such an abusive alcoholic? What's the deal with al the intergalactic junk in the garage? The game doesn't spend any time filling in the blanks. Newcomers should check out a few episodes of the show to make sure its humor gels with you. For everyone else, Virtual Rick-ality is the perfect way to hold you over until Rick and Morty's third season kicks off this summer.

In this article: AdultSwim, art, av, DanHarmon, entertainment, gaming, hands-on, JustinRoiland, OwlchemyLabs, RickandMorty, VirtualRickality
All products recommended by Engadget are selected by our editorial team, independent of our parent company. Some of our stories include affiliate links. If you buy something through one of these links, we may earn an affiliate commission.