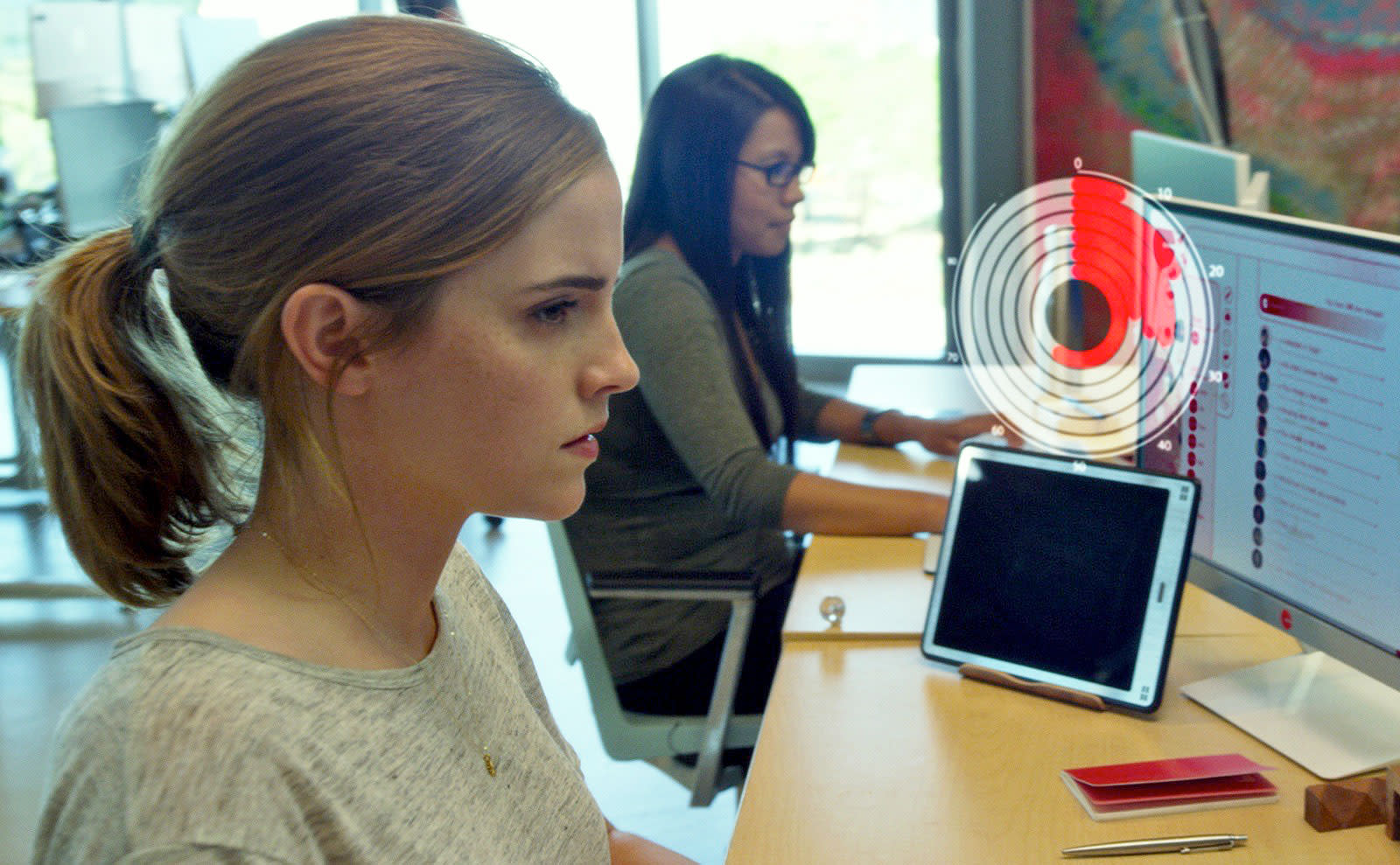 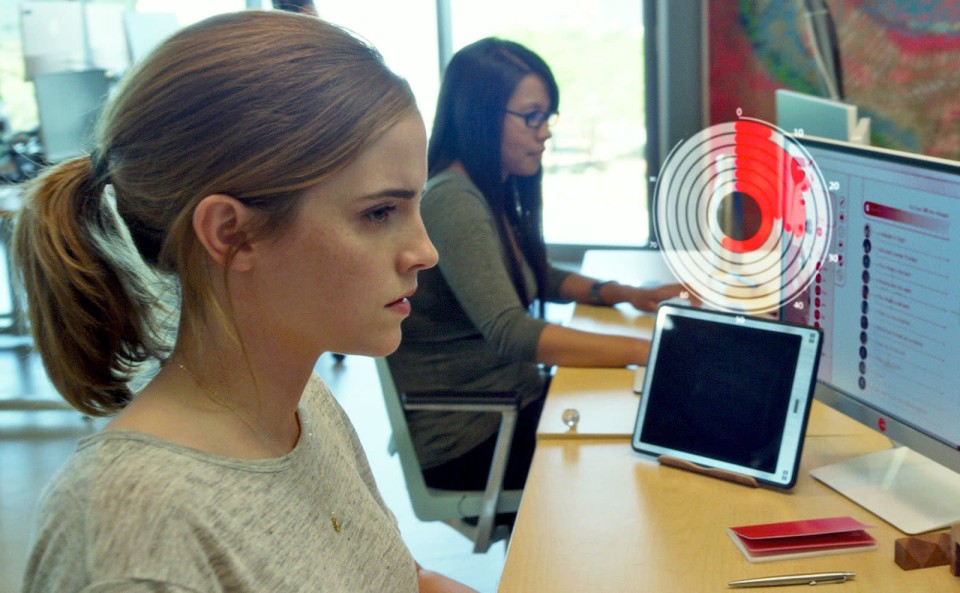 As a book, David Eggers' The Circle was a flimsy attack against modern technology culture with occasional bits of insight. As a film, though, it's so disjointed, ridiculous and dull that even Tom Hanks can't save it. Sure, it didn't really have much of a chance, given its source material. But as a fan of director James Ponsoldt's (The Spectacular Now, The End of the Tour) work, I had an inkling of hope that The Circle would translate better to the big screen. Unfortunately, practically nothing about the film works. And that's a shame -- more than ever, there's a desperate need for intelligent criticism of the technology industry today.

Spoilers for The Circle novel and film ahead.

Black Mirror does a fine job of portraying the downsides of technology. but even though it's now readily available on Netflix, it's still something that's targeted at a media and tech-savvy niche audience. A big-budget, wide-release film starring Tom Hanks and Emma Watson has more potential to reach a broader group of people who might not think as deeply about the privacy issues surrounding their Facebook accounts. Sadly, all the film really does is shout, as loudly as possible, that technology is bad and will inevitably lead us towards a totalitarian state.

The basic premise of the film feels like a modern day Charlie in the Chocolate Factory. Mae (Emma Watson) is a twenty-something with a dead-end job who miraculously receives a job with The Circle, a beloved company whose religion is sharing and who now controls the vast majority of the web. You can think of it as the lovechild of Google and Facebook.

Its earliest innovation was "TruYou," a unified account that controls everything you do on the web and ties you to your real identity. TruYou was heralded as a major convenience win for consumers, which was somehow steamrolled pass regulators and critics. Even more unbelievable, the film claims that it sanitized the web by killing off anonymous comments. Seriously, all it takes is a quick look at any site with Facebook-powered commenting to see that's false.

The company's follow-up product -- tiny and inexpensive high-definition cameras that can be placed just about anywhere -- is a bit more believable. But that's only until you learn that they also upload video directly to satellites from anywhere on Earth (for free, I guess?). And no, there's no talk of battery life either. As Eamon Bailey (Tom Hanks), The Circle's affable figurehead, describes it, the "SeaChange" cameras will lead to a world where nothing is hidden.

It's easy to see how such a product could be useful, but it's even easier to grasp how it could lead to a reckless surveillance state. Of course, few people within the company question the cameras. That duty is left up to a mysterious stranger working for The Circle, who warns Mae of the company's troubling privacy issues, and Mae's hometown ex-boyfriend, who goes off the grid to avoid tech's infiltration into his life. All other Circle employees basically seem like idiot children who lap up everything the company does.

Eventually, Mae gleefully embraces the idea of the SeaChange cameras by "going transparent," which involves wearing a camera all day and broadcasting to an online audience of millions. It never occurs to her that this could lead to issues -- even when she broadcasts her parents having sex (because, of course, she helpfully had cameras installed in their house too). The film raises some interesting questions about a generation of online users who document and share every aspect of their lives. But it's more interested in portraying that as something that's inherently wrong, instead of trying to find any deeper meaning.

Indeed, that's something the film does over and over again. It's not hard to imagine where things end up going when a crowd of Circle employees start chanting "Sharing is caring!" with religious fervor during a company-wide meeting. The Circle takes some ideas about social media to their logical conclusion, but the result is inexplicably terrible. Case in point: During a discussion about encouraging more Circle users to vote -- something Facebook has been doing for a while -- Mae posits that it could even be better to require a Circle account to vote. And it's not long before she considers making voting in America mandatory.

Mae's fascistic tendencies reach a new high point when she reveals a new search engine that can find anyone on Earth in under 20 minutes. We assume it's using some sort of facial recognition technology, but a big part of the search process also involves Circle users who can physically locate the target. Mae starts off by demonstrating how it could be used to find a criminal on the run, but her audience quickly goads her into using it to find her off-the-grid ex-boyfriend. In the film's most ludicrous sequence, Circle users chase him out of his house, pursue him in a high speed chase, and eventually use a drone to force him off of a bridge to his death. The dangers of social media!

It's cartoonish how quickly The Circle devolves into dystopia. It simply states that our modern tech will lead us down a dangerous path, instead of offering any insightful criticism. Worst of all, the film isn't even entertaining enough to enjoy as a B-movie conspiracy thriller. It feels like it's edited together with a hacksaw, with no meaningful motivation or logic connecting it. And every performance also feels stiff and inhuman, especially when they're just reciting dialog from Eggers' novel.

The Circle will no doubt scare people who are already suspicious about where technology is leading us. But really, that's all it's interested in doing. There's no intriguing self-reflection, like we see in Black Mirror. And it's certainly not asking any big questions about our relationship with technology, like Ex Machina. It's ultimately a missed opportunity, especially with companies like Facebook and Google crawling into every facet of our lives. Now that we're actually living in the over-connected cyberpunk world that science fiction has predicted for decades, I'm hoping to see some smarter mainstream technology criticism eventually.

In this article: av, DaveEggers, EmmaWatson, entertainment, JamesPonsoldt, TheCircle, TomHanks
All products recommended by Engadget are selected by our editorial team, independent of our parent company. Some of our stories include affiliate links. If you buy something through one of these links, we may earn an affiliate commission.