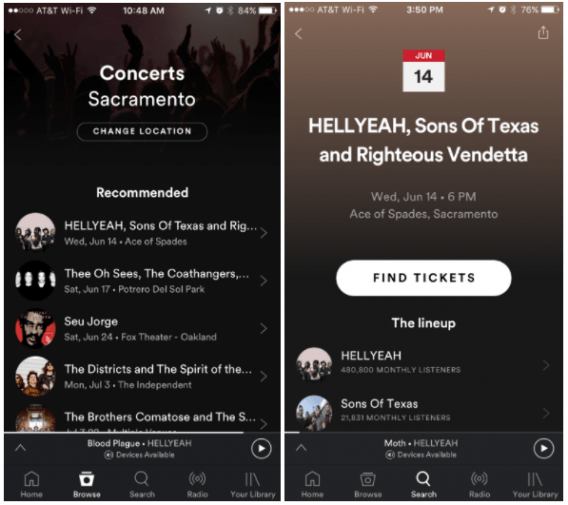 Spotify has had concert listing recommendations for awhile now thanks to a partnership with Songkick. You could purchase tickets from providers such as Ticketmaster, LiveNation and of course Songkick itself. Starting today, you can add yet another company to the list: Eventbrite. And unlike the other services, the beauty is that you can buy tickets in just a couple of taps.

As with the other concert listings, Eventbrite events will show up in your feed based on your listening habits. If you're interested in going to one, you can just tap "Find Tickets," and you'll be kicked over to the concert page where you can buy tickets directly. According to Eventbrite, you'll be able to buy them without having to login or enter in a captcha, which would make it a lot faster -- and easier! -- to get those tickets before they sell out.

Seeing as Eventbrite bought Ticketfly from Pandora a week or so ago, it wouldn't be surprising if this new concert Spotify-integration came out of that deal. It would also fall in line with rumors that Spotify was trying to see if it can get into ticketing directly. After all, if Spotify already has your credit card info, it would make sense to just use that for concert sales as well.

In this article: applenews, entertainment, eventbrite, gear, internet, mobile, spotify
All products recommended by Engadget are selected by our editorial team, independent of our parent company. Some of our stories include affiliate links. If you buy something through one of these links, we may earn an affiliate commission.