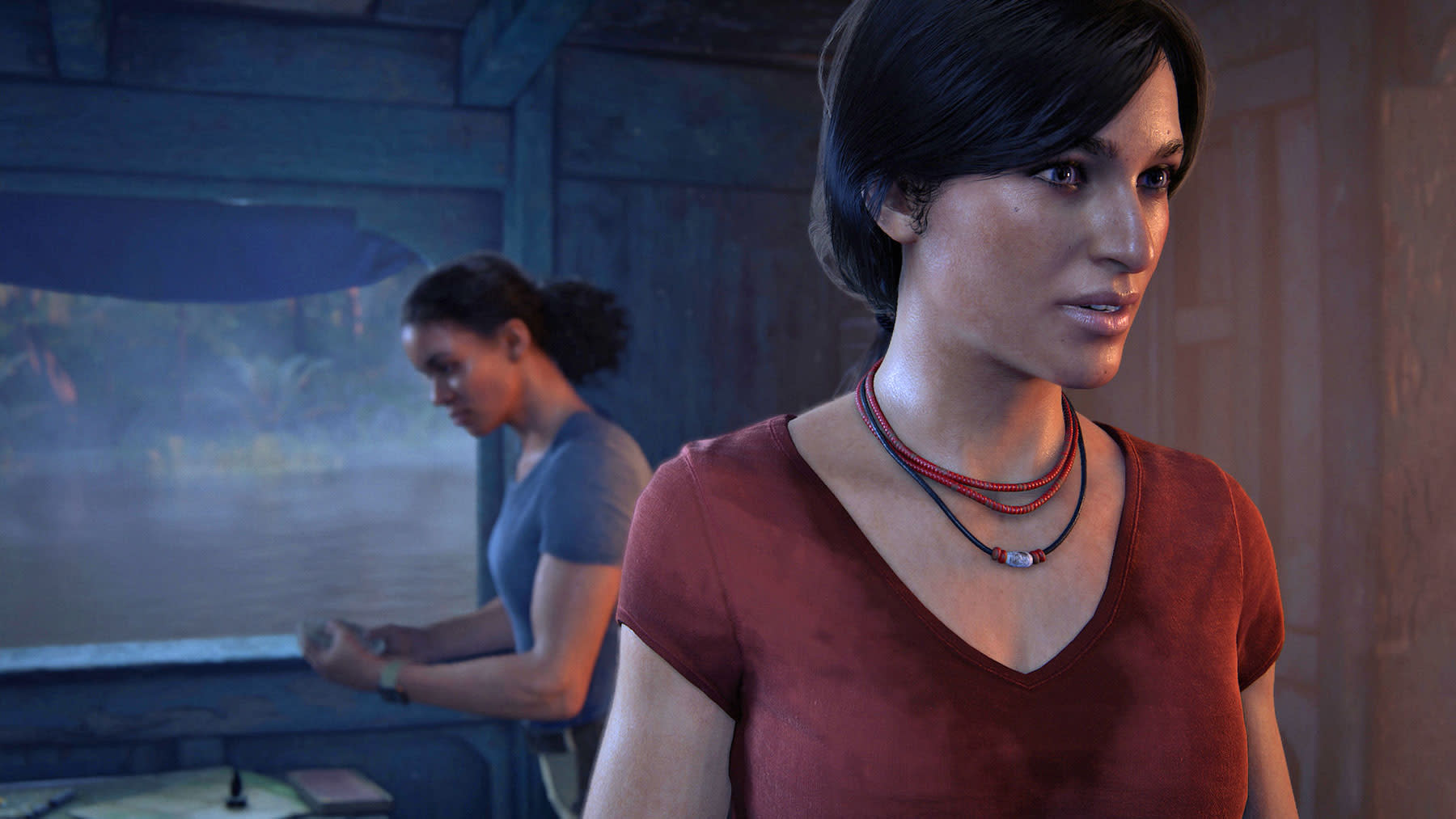 Deep in the mountainous region of India's Western Ghats, Chloe and Nadine are in trouble. The two treasure hunters have a clue to the whereabouts of the Tusk of Ganesha, a mystical artefact, but keep stumbling into an Indian rebel leader called Asav. They try to stay hidden, but are quickly discovered by soldiers out on patrol. Chaos ensues as the pair battle through enemy forces with a mixture of sharp-shooting and air-drop knockouts. It's classic Uncharted combat, the kind Naughty Dog has been perfecting since Drake's Fortune in 2007.

At E3, behind closed doors, I'm being shown a 10-minute slice from Uncharted: The Lost Legacy. It's a standalone game that will be slightly shorter and cheaper than Uncharted 4: A Thief's End, unpacking a side-story where, for the first time, franchise hero Nathan Drake isn't the lead character. Mechanically, it doesn't seem all that different from previous entries. Chloe and Nadine climb, shimmy and leap around the jungle with acrobatic ease, beating back soldiers and an armored truck along the way. There's an energy to the combat sequences -- a desperate, against-all-odds momentum driving the pair to safety.

"We're going a little bit broader, to bring it back to that slightly more fantastical feel."

Josh Scherr, a writer at Naughty Dog, says the game is about "going back to the basics." Uncharted 4 was a more personal tale, one that addressed Drake's life as an adventurer and the conflict it posed with his new marriage, home and nine-to-five job. There were grand, beautiful locations, but they were a little more subdued and believable than the first three games. With The Lost Legacy, Naughty Dog wants to go big again.

"The funny thing about Uncharted 4 is because it was about pirates, and a little bit more grounded -- these were the most architecturally advanced pirates to have ever lived -- but even still, we didn't have quite some of the same grand vistas, of say, massive statues of Ganesh carved into the mountainside," Scherr said. "So in a way, we're going a little bit broader, to bring it back to that slightly more fantastical feel."

The Lost Legacy will, however, continue the studio's trend toward deeper and more complex character portrayals. The slower, low-key moments from Uncharted 4 will return, giving the player time to learn and think about the lives of Chloe and Nadine. "We try to see what these sorts of characters' inner lives are, and more importantly, how we can use the gameplay and the story to reflect on it."

Before The Lost Legacy went into production, the team considered all of the characters in the Uncharted universe and what their own stories could be. Nathan Drake was off the table -- his story had been put to bed -- but almost everyone else was explored. But Scherr and his colleagues kept coming back to Chloe, the impulsive thrill-seeker that first appeared in Uncharted 2: Among Thieves. They knew she was a fan favorite and were keenly aware that she hadn't appeared in Uncharted 4. "We were thinking, 'Does Chloe have a place in [Uncharted 4's] story?' and she really didn't, so we thought, 'Well, this would be a good reason to bring her back.'" Chloe is a prominent figure in Uncharted 2 and makes an appearance in Uncharted 3. Despite this screen time, we know little about her history and motivations as an explorer. Scherr says the game will serve as "an introduction" to Chloe and "why she is the way that she is." She's half-Indian, for instance, and most of what she knows about the country comes from her father. The game will explore their relationship, past and present, as Chloe continues to chase the Tusk of Ganesha.

Nadine, meanwhile, is a relative newcomer. She was an antagonist in Uncharted 4, the head of a paramilitary organization called Shoreline. Tough and level-headed, she didn't care for the treasure that captivated her sinister client, Rafe Adler. That position intrigued the writing team at Naughty Dog. For one, she was a villain. For another, she was the only antagonist to survive through to the end of an Uncharted game. "She has her own agenda," Scherr said, "and she's kind of above the whole treasure hunting thing. She's not quite as insane as Nate or Rafe was. This is her means to an end."

A tale of trust

The Lost Legacy is an exploration of their relationship. Thrust together by happenstance, they must work together to achieve a common goal. At first, "you're going to see oil and water trying to mix," Scherr says, as they struggle to trust one another or accept their way of thinking. Chloe is a capable fighter, but her approach to conflict is often improvisational. She's also focused on self-preservation and will run if the odds are against her. Nadine, however, is more tactical and logical due to her military background.

In the demo I was shown, for instance, there's a moment where Chloe and Nadine sneak up behind two guards. "Right, you take left, I'll take right," Chloe whispers. Before she can get close, however, Nadine has already strangled her target and kicked the other in the face, knocking them both out cold. "That works too," Chloe says with a dollop of sarcasm. "Nice job." Nadine turns and, referring to the soldiers, replies in a matter of fact tone: "Probably more where that came from." "Right," Chloe sighs.

The Uncharted series is known for these funny quips. Drake and his companions banter back and forth as they climb mountains and investigate tombs together. It makes sense because they're supposed to be friends, people who have gone through hell together and know what makes each other tick. But with Chloe and Nadine, the effect has to be more subtle. "We would be looking at some of the early dialogue we wrote and were like 'You know what, this is too friendly. They don't know each other that well yet, they wouldn't be asking each other these questions.'"

Later in the demo, the pair are forced to pick their way through some underground ruins. They discover a prison cell full of skeletons, which pushes Chloe to mutter: "Poor bastards." Nadine instantly fires back: "I would prefer to be left to rot in a cell than to be tortured." In almost defeated tone, Chloe responds: "Duly noted."

The Lost Legacy's shorter length meant the team had to get creative with dialogue and cutscenes. Like The Last of Us and Uncharted 4, there will be optional conversations that you can trigger when a speech bubble appears above a character. In those instances, Naughty Dog knows that you're willing to slow down and take the game at a more leisurely pace. The camera will focus in and prevent you from moving forward too far so that the pair can have a revealing back-and-forth. If you skip them, you'll still get the gist of the story, but for Uncharted fans this is vital material to further understand the characters and universe.

The multiple choice dialogue sequences will return too. Like Uncharted 4, however, they'll be used sparingly. "When we did that in 4, it was funny," Scherr recalls. When we released that first trailer, people were like 'Oh my god, is this going to be like Mass Effect?' Well no. No, no, no. We did it to achieve a very particular effect in a few isolated locations." As for The Lost Legacy? "We explored doing that in this game as well. You'll see."

Uncharted games are linear, story-driven experiences, but Naughty Dog is intrigued by open-world mission design too. One area will be "considerably more open" than the rest of the game and allow the player to tackle objectives in a random order. That means there will be a handful of different dialog permutations based on what you do first and last. "It's going to be different, accounting for a lot of different scenarios," Scherr hints. Above all, however, The Lost Legacy is a blank slate. A fresh starting point for Naughty Dog to deliver a classic Uncharted story. Scherr thinks of it as "resetting the button." While there will be references to other Uncharted games, anyone should be able to pick this up and appreciate Chloe and Nadine's adventure. "For the people who have played the previous games, there will be some stuff there that'll make them be like, 'ooooh, that's cool!' but other than that, yeah we really wanted it to be as standalone as humanly possible," Scherr said.

Which begs the question: Can we expect more standalone Uncharted games? The team did draft up stories for other characters, after all. "Never say never," Scherr teases.

In this article: applenews, art, e32017, gaming, naughtydog, sony, thelostlegacy, uncharted, unchartedthelostlegacy, video
All products recommended by Engadget are selected by our editorial team, independent of our parent company. Some of our stories include affiliate links. If you buy something through one of these links, we may earn an affiliate commission.