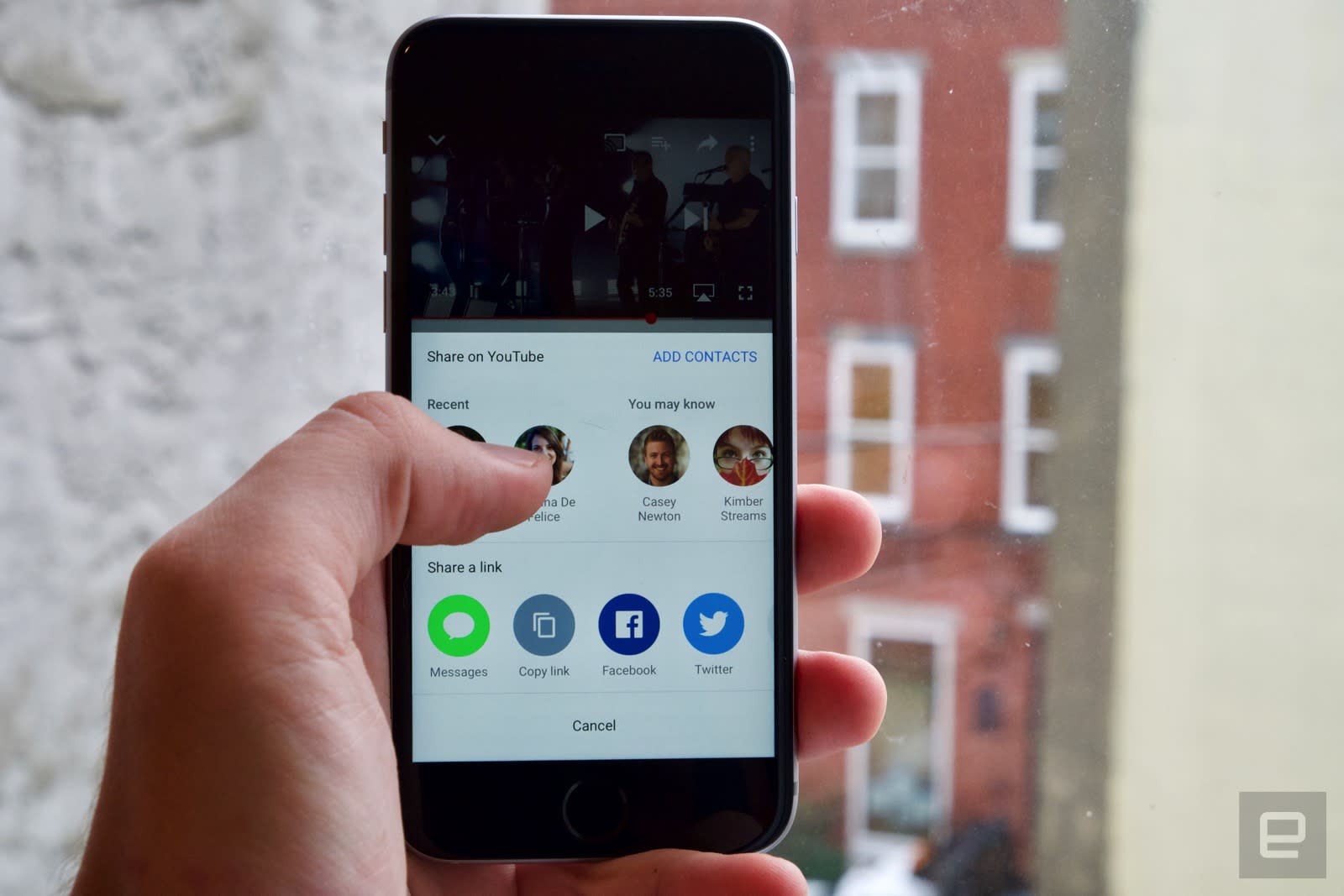 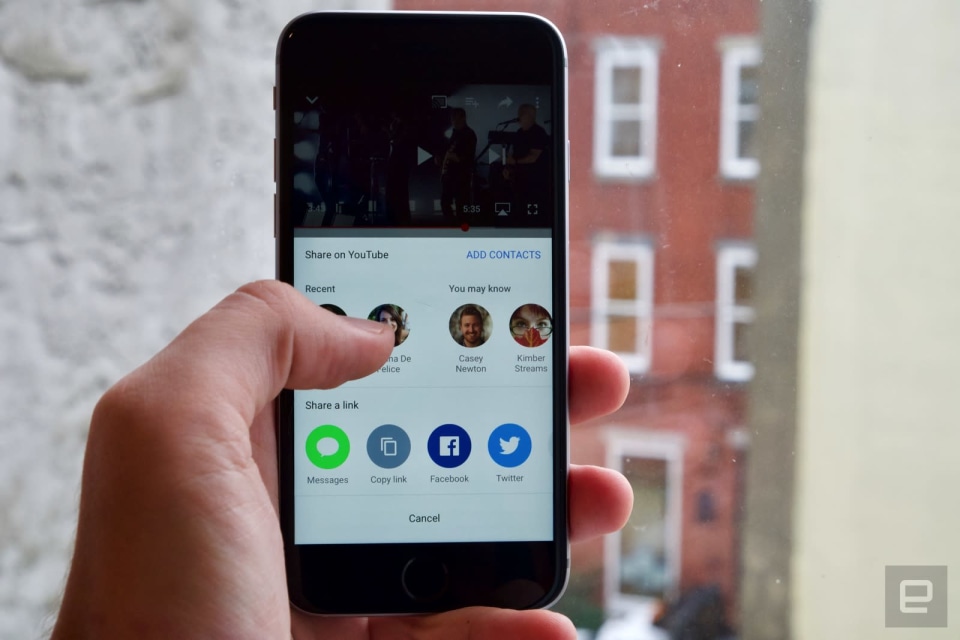 When I heard that Google was adding direct messaging to YouTube, the first thing I thought was "great, Google has another messaging app." After juggling Google Talk, Hangouts, Allo and Google Voice messages with mixed success, the idea of yet another way to communicate from this particular company was a bit laughable. However, YouTube's newest feature isn't Google's latest attempt at finding its own answer to iMessage or Facebook Messenger. In this case, it's more about keeping customers on its platform, sharing and watching as many videos as possible.

It's a lesson that YouTube has seemingly learned from Instagram, which first introduced in-app sharing in late 2013. Initially, that feature let you share photos privately with specific individuals, rather than posting them to your entire feed. It's evolved quite a bit since then; you can share any public photo or video you see on Instagram with an individual or group and then chat away about it right in the same interface. And you can also still shoot new photos or videos and share them with a specific group.

It's probably not a coincidence that YouTube's implementation is basically identical to Instagram's. You can share any public video on the platform with an individual or group; that opens up a standard chat that can just be text messages back and forth until someone adds another video to the conversation. Unlike Instagram, though, which lets you shoot and share photos or videos that aren't posted on the platform, YouTube only lets you share videos that have already been posted. So it's not exactly going after Snapchat in the way that Instagram has; you won't be able to share fresh clips with your friends in YouTube.

Despite that difference, YouTube figured out what Instagram has known for a few years: Messaging and sharing directly on-platform is key to keeping your users engaged. Instagram has been working toward this ever since it removed support for Twitter cards way back in 2012. At the time, users frequently posted pictures edited in Instagram directly to Twitter, diluting the value of Instagram's own platform. There was an outcry when rich Twitter integration was removed, but time has shown that Instagram made the right decision. Although this move was initially user unfriendly, Instagram fans ultimately got a better experience by being compelled to check out pictures on a platform that Instagram controls.

While you'll initially need to invite your friends to share videos on YouTube with an SMS request, YouTube messaging is simple and user friendly once it's set up. It basically takes three taps to share a video: Hit the share button, tap on one of your frequent contacts and hit send. You can add an initial comment as well; it's a fast and easy process. Of course, it wasn't hard to share YouTube on your phone's native messaging app before -- so YouTube had to make this simple and better in some ways. The combination of front-and-center frequent contacts made sharing easier, and being able to go back to your threads and pick up the conversation days later from within YouTube is handy as well.

Even if YouTube's in-app sharing isn't much better than dropping videos in your messaging app of choice, the company had little choice but to introduce a feature like this. YouTube may be a video juggernaut, but if people are jumping over to Facebook to share videos, they're just as likely to keep on browsing Facebook, viewing and sharing more content there than back in YouTube proper. Basically, the better a job YouTube can do at keeping people on its platform, the better off it'll be -- users will be more engaged, and that means they'll watch more ads. And to avoid being completely cynical, it's entirely possible that YouTube will continue to enhance the experience when you share and watch video directly in its app, just as Instagram did.

Additionally, the tremendously social nature of YouTube makes this a natural addition. I personally use YouTube mostly to find videos on specific topics, regardless of who created it. But plenty of people actively follow friends and strangers alike, consuming every video they post. And given how personal of a medium video is, these YouTubers can end up feeling like friends, even if you've never met them before. Basically, YouTube is one of the biggest and most active social networks that isn't Facebook -- giving people a way to communicate through it is a pretty important feature.

So if you've felt burned by Google's unorganized and slapdash approach to messaging, don't be too worried here. Google and YouTube have a lot of incentive for making this work simply and well; for years now, CEO Sundar Pichai has talked about how important YouTube is to Google's ad business. YouTube remains the king of video publishing and sharing, and finding new ways to keep people watching more videos will help keep it that way.

In this article: av, editorial, entertainment, google, internet, messaging, services, sharing, socialnetworks, socialvideo, youtube, youtubemessaging
All products recommended by Engadget are selected by our editorial team, independent of our parent company. Some of our stories include affiliate links. If you buy something through one of these links, we may earn an affiliate commission.