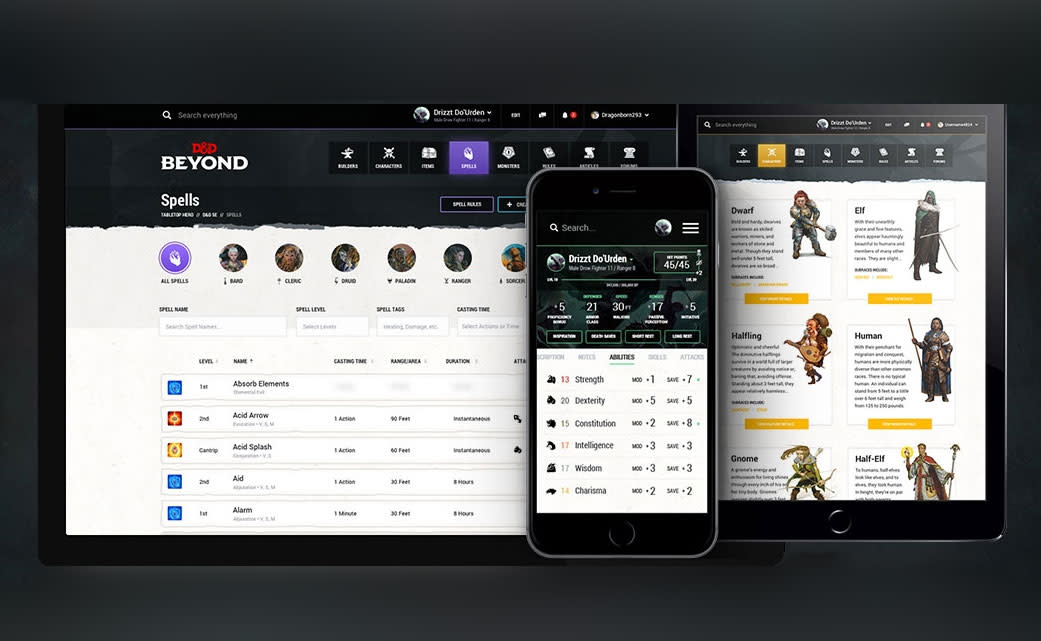 Back in March, Wizards of the Coast announced a new digital toolset for Dungeons & Dragons that would eliminate the agony of paperwork in the pen-and-paper game. Players can still gather around a table and roll their own dice, but the web-based D&D Beyond will handle all their characters' stats, skills and modifiers to streamline play. Today, the toolset is available for everyone with both free and paid tiers. Time to assemble a party, adventurers.

When we peeked into D&D Beyond, we liked what we saw: Finally, you can parse through the game's Fifth Edition rulebooks and search for particular terms, which is a godsend for anyone who's gotten lost in the official tomes. The step-by-step character creation process is great for players new and old, especially since you can fold in your own homebrew rules.

Best of all, you can use D&D Beyond without paying a dime -- though there are benefits to subscribing. The ad-supported free tier grants most of the service's features including the full site tools and access to the community forums, though it caps users at a 6-character roster. For $3 per month, the first paid option gives unlimited characters and allows users to load public fan-made content (spells, monsters and the like). The pricier $6 tier is for more serious party-forming players and dungeon masters, granting them bonus official materials.

While it's currently only on the web, Wizards plans to expand D&D Beyond to mobile apps for an even more manageable experience. While the ultimate goal is to fully transition the game's manuals and documents to digital platforms like D&D Beyond, they'll keep printing books so long as the demand exists. After all, there's nothing like cracking open your heavily-tabbed Monster's Manual to find the next beast you'll throw at your unwitting party...

In this article: dnd, dndbeyond, DungeonsAndDragons, gaming, internet, services, wizardsofthecoast
All products recommended by Engadget are selected by our editorial team, independent of our parent company. Some of our stories include affiliate links. If you buy something through one of these links, we may earn an affiliate commission.