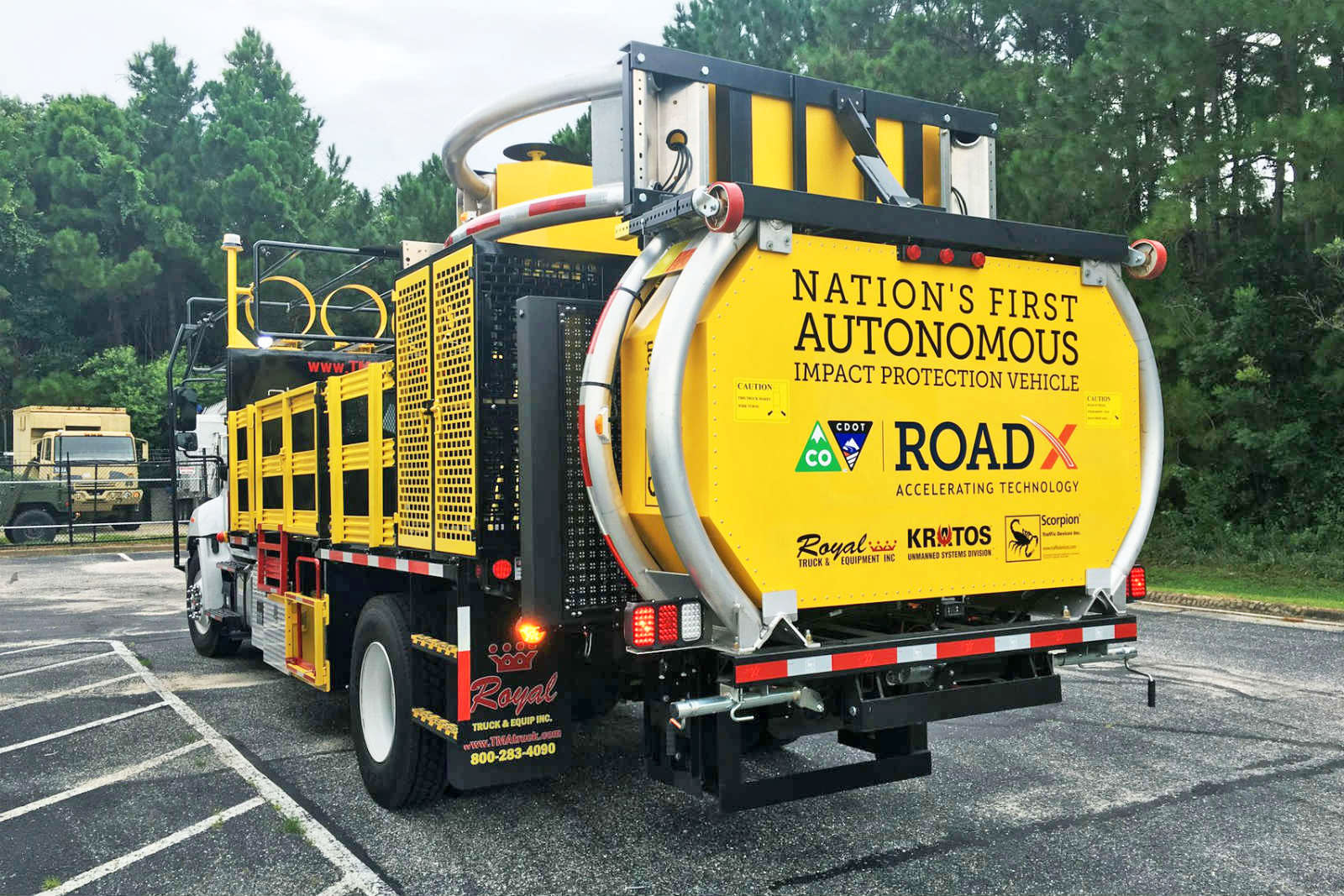 Tech and automotive companies have quietly been trialing autonomous trucks since 2015. Thus far, these tests (from the likes of Daimler and Uber) have been inconspicuous enough to go unnoticed by other drivers. But, a new kind of driverless truck is designed to stick out like a sore thumb. And, if by chance it ends up serving its purpose, it could make an almighty racket. While you read this, an autonomous impact protection vehicle is making its way around Colorado. You know the type: They're big, yellow, and tend to be deployed behind road workers to prevent you from crashing into them. One more thing we should mention: They're designed to take the full brunt of a collision. They do this via a massive metal bumper on the back.

Like other self-driving trucks, this modern safety vehicle takes a traditional body (with subtle mods) and adds autonomous tech to the mix. The software comes from Kratos Defense and Security, a company that specializes in military drones and missile targeting systems. On the road, the truck crawls behind a regular car hooked up to precise GPS. This vehicle emits a signal that the robotruck uses to maintain its speed, position, and heading. On top of that, it uses its own radar to avoid obstacles.

Its goal is to save lives and -- by going driverless -- it also ends up being even safer. How so? Well, by removing its own driver from the equation. Driving a car that's designed to crash sounds like an insanely dangerous occupation. Yet, to this day, humans are the ones carrying out this task around the country. That's something the Colorado Department of Transportation (DOT) is intent on changing. With this trial, the state is now the first to test a connected impact protection vehicle without a support driver at the wheel.

"People often talk about the coming job displacement of automated vehicles...well this is actually one job I want to get people out of," Shailen Bhatt, Colorado DOT's executive director, told Wired. "The idea that we have a truck thats job is to get hit, with someone sitting in it, well that doesn't make a lot of sense."

Next up, the aim is to get the vehicle performing other tasks. One day, similar robotrucks could lay down road stripes. If Kratos has its way, they'll also be utilized as tugs in shipping docks, as garbage trucks, and road sweepers. Not quite as fancy as the concept cars showcased at conventions, but a (quiet) revolution in their own lane.

In this article: AutonomousVehicles, Self-drivingCar, self-drivingtruck, tomorrow, transportation, truck, hidden:vv_3x4:fd22422e-79ab-347e-979a-45f283f064b5, hidden:vv_16x09:012f5805-7912-37e6-90fe-79873b9f435c
All products recommended by Engadget are selected by our editorial team, independent of our parent company. Some of our stories include affiliate links. If you buy something through one of these links, we may earn an affiliate commission.