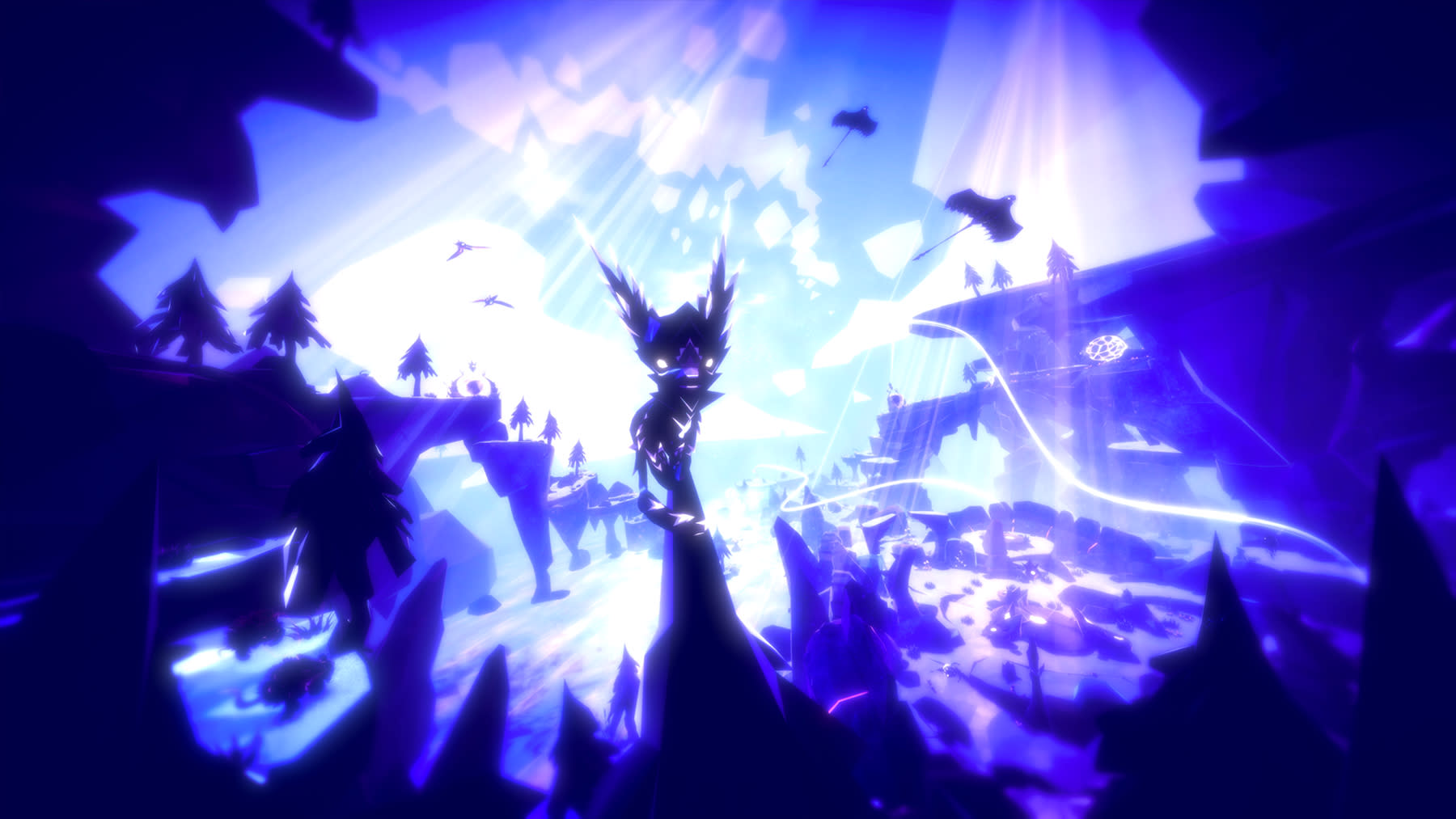 'Fe' is a stunning adventure about connecting with nature

Heed the call of the wild.

Once, Andreas Beijer snuck up on a deer. He remembers tip-toeing through the forest, always downwind to ensure it wouldn't pick up his scent. "I managed to come really close," he says. "I could almost touch it, before it noticed me and ran away into the forest." Beijer is a creative director at Zoink Games, an independent studio in Sweden. His team grew up playing in the woods and wanted those experiences to shape their next game. "We were free," Klaus Lyngeled, the company's CEO and Creative Director said. "We could just run out in an area, play around and not have our parents look at what we were doing."

The result is Fe, a beautiful puzzle-platformer set in a dark, Nordic forest. The hero, a small, fox-like creature, is jet-black, save for its bright eyes and fur tips. The other wildlife is similar, a mixture of ink and gleaming light, mysterious and dream-like. They contrast the forest, which is made up of sharp, geometric geography and bright, punchy colors. Stunning shades of purple, blue and orange serve as a backdrop for the murky trees and bushes. There's a graininess too that makes the world both claustrophobic and enticing. You always want go deeper and see what lies beyond.

The atmosphere is by design. Lyngeled found the forests of his childhood scary, but serene. "And the further you went, it would get more interesting and more interesting," he says. "You had to sort of challenge yourself to go further and further into this scary place."

At Gamescom, I was able to see a brief hands-off demo led by Hugo Bills, a Producer and Creative Director at Zoink Games. He showed me Fe's basic abilities, which include running, climbing and gliding. Some are available from the start, while others will be locked behind quests, or rather animals that live inside the forest. By helping or communicating with them, they'll become an ally and teach you some of their secrets. Some birds, for instance, can open up plants which shoot you high into the air. Others might show you how to burrow into the ground, or scuttle up nearby trees.

Zoink Games wants each of these encounters to feel special. In one scene, for instance, Bills crept toward a giant eagle guarding a handful of eggs. He moved cautiously, trying a couple of primitive calls picked up from other creatures. "Once you meet an animal in a forest, it's a really weird moment," Lyngeled says. "Because you're walking through this forest, and there will be nothing, nothing, before suddenly 'Wow, there's this creature there!' And you're actually entering their domain. This is where they live."

Unable to communicate, Bills walked off in search of other adventures. But then a group of "silent ones" appeared. These tall, two-legged enemies (they're not humans, I'm told) are mysterious, formidable opponents that Fe would struggle to take head-on. Bills climbed up a nearby cliff and threw down some glowing pods until the silent ones were startled and moved on, much to the eagle's relief. Bills then clambered down and shared a moment with his new feathered friend, learning a new animal cry in the process.

Communication is key to understanding the forest and using its inhabitants — both plants and animals — to explore new areas. The birds, for instance, won't just open nearby flowers. "Once you become friends with them, they'll also sort of guide you through the levels," Lyngeled explains. Call a bird once and it'll fly down for a moment; call again with just the right timing and it'll fly towards an area of interest.

There's an underlying ecosystem too. Animals like certain plants, so you might want to try their specific "calls" to interact with the vegetation. "If a flower speaks this language, and this bird likes this flower — maybe if I learn that bird language I can also talk to this flower?" Lyngeled hints. Over time, you'll master the forest and set off chain reactions using a mixture of calls and platforming abilities. Bears, for instance, are aggressive towards the silent ones, so you can throw its favorite food toward an enemy camp and open up a previously inaccessible path.

"And if you scream really loud, some animals will run away," Beijer says. "So you have to sort of lure them by talking gently. By moving gently. Things like that. But once you're friends, they're more easygoing, so they don't get startled as easily."

There's no traditional dialog in Fe. No quest-tracking system, or even a map to know where you are in the world. You'll need to interpret everything through the game's animal voices and build your own mental map of the forest. For Zoink Games, it's a huge design challenge, but one they've come to relish. Like Journey, Abzu and Inside, their view is that the story should be open to interpretation. "We have an idea of what the story is about, but we're not 100 percent certain that everyone is going to come out with that exact impression," Bills says.

Much of the game is still shrouded in mystery. But the team hinted that the general structure is reminiscent of Metroid. One large, seamless world that slowly opens up as you play. There will also be huge creatures reminiscent of Shadow of the Colossus. Towards the end of the demo, Bills scaled a huge reindeer that towered over the rest of the forest. It was so large, in fact, that trees were growing on its legs and back. Upon reaching its head, the two shared a brief conversation, granting Fe the power to talk to other deer.

"We have an idea of what the story is about, but we're not 100 percent certain that everyone is going to come out with that exact impression."

Fe is an intriguing adventure filled with visual wonder and a unique underlying theme: How communication, and playfulness, is key to reconnecting with nature. It's also part of EA's "Originals" initiative, which so far has delivered Unravel and soon, the split-screen co-op adventure A Way Out. Thankfully, it won't be long before we know how Fe has turned out; it's scheduled for early 2018 on Xbox One, PlayStation 4, PC and the Nintendo Switch. I'm particularly excited by that last one, if only so I can sit and play while my back is resting against an old birch tree.