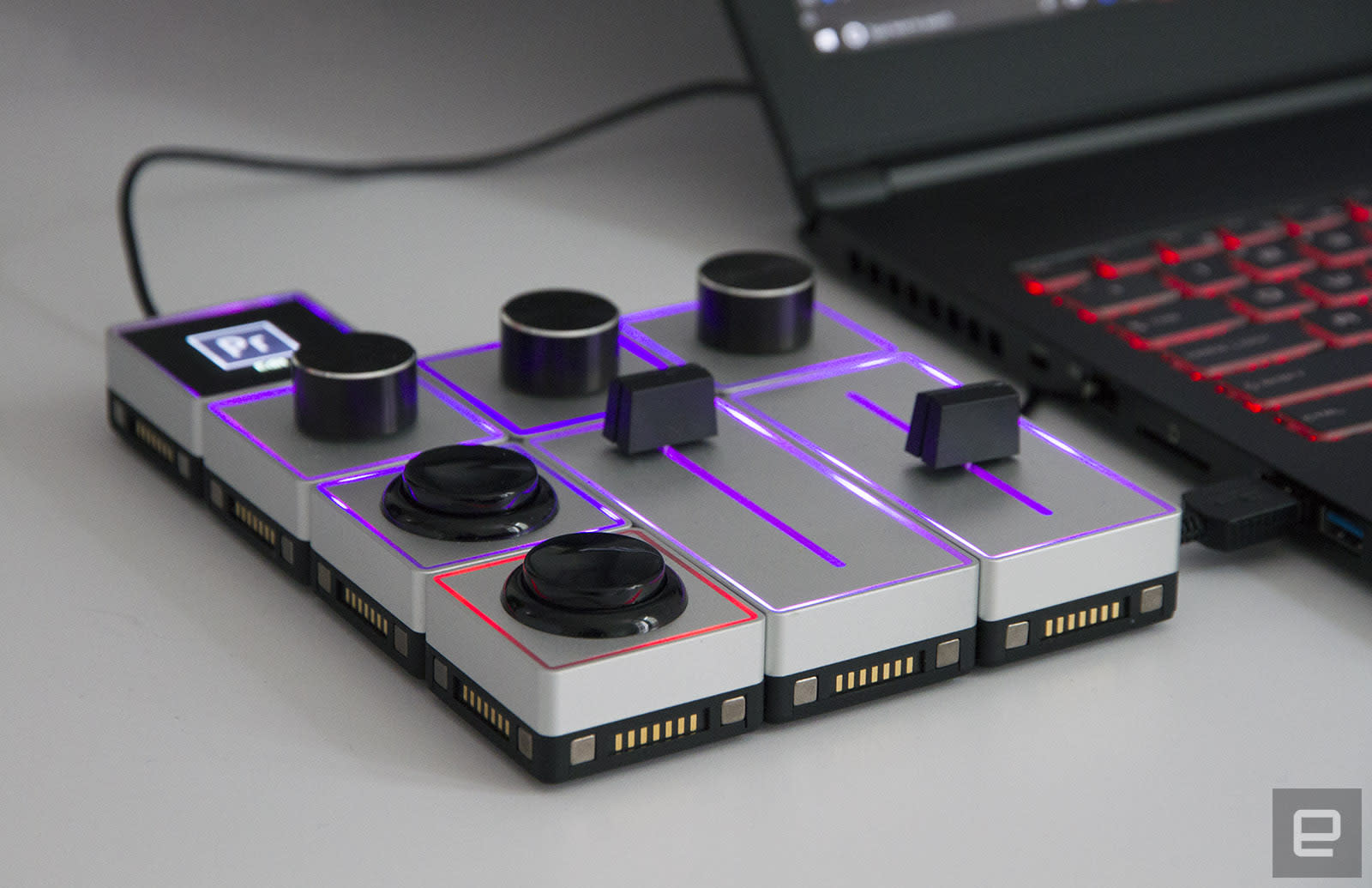 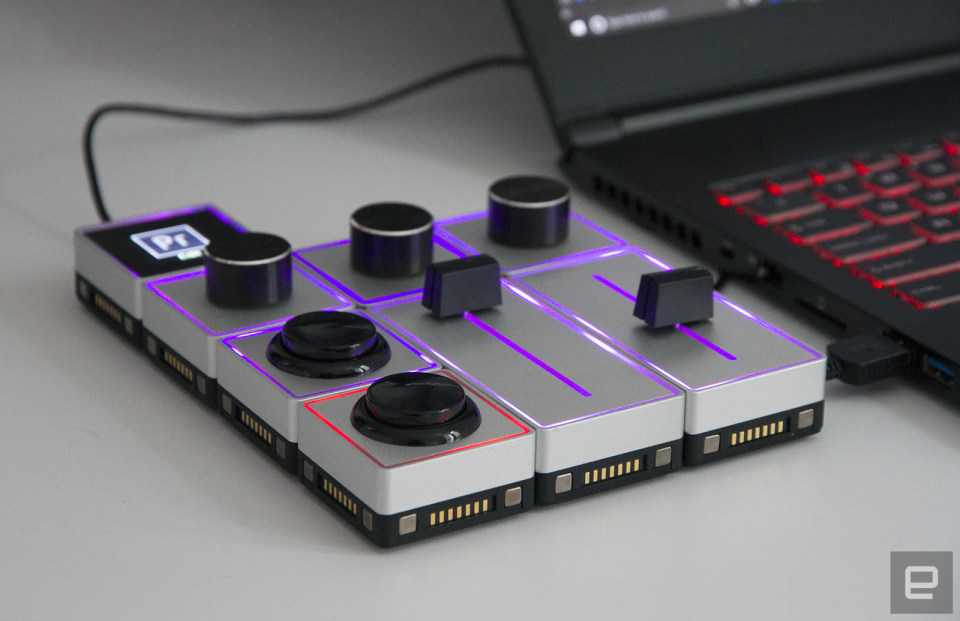 Until robots take over video editing, you'll still have to fiddle with cuts, colors and sound levels. A keyboard is not always the best tool for that, and many control surfaces, like Loupedeck, are strictly targeted at Lightroom users. So what's a video editor to do? One of the more interesting controllers on the market is Palette Gear -- it's expandable, flexible, programmable and looks cool. As I discovered, if you're willing to spend some timing learning and programming, it can make you a faster and better editor, too.

As with other niche products, Palette Gear began on Kickstarter. It was a decent success, earning $150,000 or so, but most important, the company actually followed through and shipped it to buyers. It's now a commercial product that you can buy at B&H Electronics and elsewhere, and the company has consistently added more functionality. For video editors, Palette recently unveiled advanced integration with Adobe Premiere Pro CC.

With video-editing control surfaces, the choices are narrower than for Lightroom. Blackmagic Design makes very powerful control surfaces for its DaVinci Resolve video-editing software, but the cheapest -- the Micro Panel -- is $995. You can also go with the Behringer BCF-2000, a motorized $299 audio mixer that can be programmed for video. For the $300 price, Palette's Expert Kit is ready to go and is one of the most, if not the most, cost-effective options. The folks at Palette shipped me the "Expert Kit," complete with three dials, two sliders, two buttons and a central "brain" controller. The company advised me to try it with Lightroom as well as Premiere, saying that "we've still got some ways to go before [Photoshop and Premiere] are as complete of an integration." The company needn't have worried -- I found the Premiere app covered just about every function I needed, and I didn't experience any major problems or bugs with it.

The system works like electronic Lego, snapping together magnetically and using pogo pins to link the modules. All are controlled by a central "Core" brain that displays the current profile on a nifty LCD screen and attaches to your computer (Mac or PC) via a USB cable. Modules include a button, dial and slider, and you can chain together as many as you want, adding more modules at $50 each.

The $300 Expert Kit had enough functionality for me, but if I ever went back to doing video editing, I'd opt for the $500 Professional Kit, with six dials, four sliders and four buttons. There's also a starter kit, with two buttons, a slider and a dial, priced at $200.

The software setup instructions were a bit vague, not telling me whether to install the app or hardware first. So I installed the software to start with, and after arranging the modules in a square as shown above, plugged them in afterward. That seemed to work just fine. Next up, I launched the main app. Palette is set up with a number of "Quick Start" profiles based on your kit: Edit Starter, Professional and Expert, along with Grade, Vignette and Motion. It requires Adobe Premiere Pro CC 2015.3 or later, and I used the latest 2017 version. You need to first load the profiles you want to use, then stack them in tabs on the app. Once you launch Premiere Pro CC, you need to make sure that the Palette controller is enabled in the preferences.

Then, I was all set. After using the quick-start "Edit Expert Kit" profile for a bit, I quickly changed it to suit my own style. I used the dials for jogging, next or previous edit and zoom in/out on the timeline; the sliders for volume and mixer active track volume; and the buttons for start/stop playback and switching between Palette's Premiere Pro modes (Edit, Grade, Vignette and Motion).

The quality of the hardware is good for a consumer product, but not at the same level as an expensive control surface from BlackMagic, for instance. I found the dials worked great, operating smoothly and allowing a press to reset. The sliders felt similarly good, but because they're not motorized or mechanical, they could really use a button-like "reset" option like the dial -- motorization would be ideal, though. The arcade-like buttons were fine, but one of mine had a quality-control issue, activating the control with just a slight touch instead of a full click.

I set up the "Grade" profile with the dials targeted to exposure, white, and blacks, the sliders set to temperature and saturation, and the buttons set to "next edit point" and, again, next profile. I left the "Motion" setting, which I primarily use to add pans and zooms to still images, on the default profile, and did the same with "Vignette." If you use other functions often, you can create, save and export custom profiles. For folks who do a lot of audio editing in Premiere Pro CC, I could easily see setting up a profile for that.

Programming your own style is essential to making Palette useful. Every editor has his or her own workflow, so you have to figure out whether to use the keyboard, mouse or Palette for specific functions to be as efficient, precise or speedy as possible. If you can't figure out how to create a decent profile for yourself, other users have created and uploaded them for Premiere, Lightroom and other apps. For editing, I chose functions that I absolutely hate doing with a mouse or keyboard, like moving between edits, jogging and tweaking volume levels. I also tried to eliminate the keyboard as much as possible, as I've never been a keyboard person. After some practice, I believe that the Palette controller made my editing around 10-20 percent more efficient.

Because it was conceived for Lightroom, the Palette Gear really shines for Premiere Pro color-grading. With version 2015, Adobe overhauled the video app's color controls with Lumetri, which is like a mashup of its Speed Grade color-correction app and Lightroom.

I can get a shot about 90 percent right with just a few controls (exposure, whites, blacks, color temperature and saturation), so I programmed those into the Palette "Grading" profile. One suggestion for the Palette folks: It would be nice if the "switch profile" button could also change the corresponding profile in Premiere Pro CC, selecting "Color" or "Effects" for Grading and Motion. The Palette Gear's other main Premiere profile, Motion, is also dramatically better than just using the keyboard and mouse. That's because Premiere's interface for Motion is pretty crappy, requiring lots of fiddling with the mouse. Using Palette, you can adjust X and Y position, along with scaling, and then easily set a keyframe.

What's nice about the Palette controller is that it can also be used for other apps, and I found it to be just as effective as the Loupedeck for Lightroom, once you get the hang of it. As with Premiere, you must create profiles customized to your workflow for each app, and program a button to switch between them.

As for downsides? Professionals will find the hardware a bit cheap, but it's actually not bad for a consumer-level product, and comparable to the Loupedeck. The company needs to do something about the sliders, though, and either add a reset clicking option or motorization. Software-wise, the new Premiere Pro advanced app was solid and bug-free while I used it, though the company could make the installation process a bit clearer.

Overall, I found that the Palette Gear Expert Kit made me a better editor, and actually made Premiere Pro CC a lot more fun -- especially color correction. The fact that it's programmable, works with different apps and can be snapped together in whatever configuration you want makes it particularly useful for do-it-all graphics pros. Don't expect it to do everything out of the box, though -- you have to put in some time to learn and program it.

In this article: AdobePremiere, cameras, Controller, ControlSurface, gear, Lightroom, PaletteGear, personal computing, personalcomputing, Photoshop, VideoEditing
All products recommended by Engadget are selected by our editorial team, independent of our parent company. Some of our stories include affiliate links. If you buy something through one of these links, we may earn an affiliate commission.