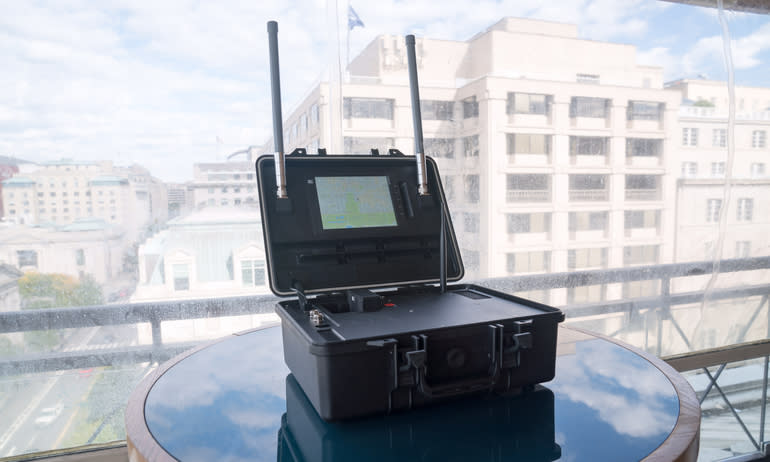 This morning, Chinese drone company DJI demonstrated its new AeroScope device that can track UAVs in a 5-kilometer radius. At the moment, it can only monitor the company's drones, but it's a potentially potent tool for law enforcement (or other DJI-authorized customers) to keep an eye on aerial activity within their radius.

The AeroScope tracks drones via the radio transmission between them and their remote control. This gives the device everything it needs to know, from the UAV's location and speed to its registration or serial number, and even where it took off -- and its operator's position. DJI preempted questions about the AeroScope in a series of tweets, assuring that it couldn't take control of a drone, receive videos or photos from it or automatically transmit personally identifiable information. Another tweet pointed out the system's low cost to law enforcement, ability to theoretically track every existing drone and that it "respects the rights of responsible pilots."

Drone identification has been on DJI's radar for awhile: Back in March, the company pitched an "electronic identification network," but US authorities didn't bite, nor did productive plans emerge from later industry and FAA summits in July. The AeroScope is the realization of that idea, down to the method of intercepting data over radio transmission. But instead of automatically tracking every drone in the sky, DJI is inviting other companies to make their products compatible with AeroScope. That would only take a firmware update, DJI told The Verge.

Of course, DJI made clear that the AeroScope would need to respect drone owners' privacy while being a useful tool.

"AeroScope is designed to meet authorities' legitimate needs concerning safety, security and privacy while also respecting the rights of people and businesses who use drones," Brendan Schulman, DJI's VP of policy and legal affairs, told The Verge. "DJI's solution provides the information authorities need, while ensuring that flight data is only collected on the small number of drone flights that could raise concerns. The overwhelming majority of drone flights are safe, responsible, and uneventful, and we believe there is no reason for them to be centrally tracked and recorded nationwide.

In this article: DJI, drone, gadgetry, gadgets, uav
All products recommended by Engadget are selected by our editorial team, independent of our parent company. Some of our stories include affiliate links. If you buy something through one of these links, we may earn an affiliate commission.