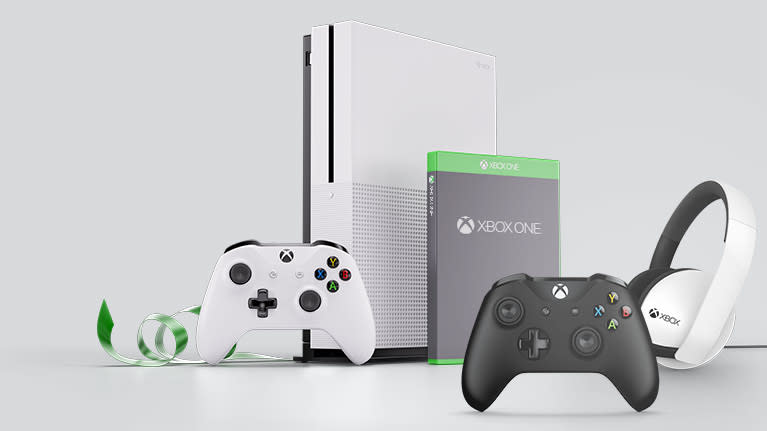 News of Black Friday deals are starting to roll out, and Xbox is getting in on the action. Microsoft has announced the slate of deals that will be available on one of the biggest shopping days of the year and they include the lowest price ever on an Xbox One S -- just $189 from November 23rd through the 27th. Presumably, this is for the 500 GB model of the game system, but we've reached out to Microsoft to clarify.

If you don't want to wait for the Xbox One S (or are worried about retailers selling out), you can snag a console (again, presumably a 500 GB version) for $249 with an additional game as a bonus through the 18th. If you're eyeing bundles, rather than standalone consoles, you can save up to $50 on any 500 GB or 1 TB Xbox One S bundle from the 19th through the 27th. Accessories are also on sale; you can get $50 off an Xbox Elite Wireless Controller with the purchase of an Xbox One X through the 18th, and $15 off Xbox Design Lab controllers online from the 21st through the 27th. From the 23rd through the 27th, gamers can save $20 on Xbox wireless controllers and $15 off stereo headsets.

Xbox is also advertising $20 off select games and 35 percent off family friendly titles from the 23rd through the 27th. Xbox Live Gold members get access to online Black Friday deals four days early, starting the 17th, and can enjoy up to 65 percent off Xbox One games, Xbox 360 games, movies and TV shows. Gamers can also save on Xbox Live Gold subscriptions and the Xbox Game Pass.

The Xbox One S sale is a great deal on the console that will seriously tempt those looking to upgrade or buy a new game system for the holiday season. It's worth noting that PlayStation also has released its Black Friday deals, and you can snag a PS4 Slim 1 TB console for $200. You'll get a larger hard drive for the money, but the Xbox One S supports 4K and HDR (but not for games -- 4K games are limited to the Xbox One X, but you'll get HDR games on the S).

Update: A Microsoft spokesperson confirmed to Engadget that the $189 console is indeed the 500 GB version. "The deal includes an Xbox One S 500GB console, 1-month Xbox Game Pass trial, Xbox Wireless Controller and a 14-day Xbox Live Gold trial. Select retailers are also adding additional value, such as a free game with purchase. Check with your local retailer for more details. This deal is only available this Black Friday through Cyber Monday in the US and Canada."

In this article: blackfriday, business, gaming, microsoft, xbox, xboxones
All products recommended by Engadget are selected by our editorial team, independent of our parent company. Some of our stories include affiliate links. If you buy something through one of these links, we may earn an affiliate commission.