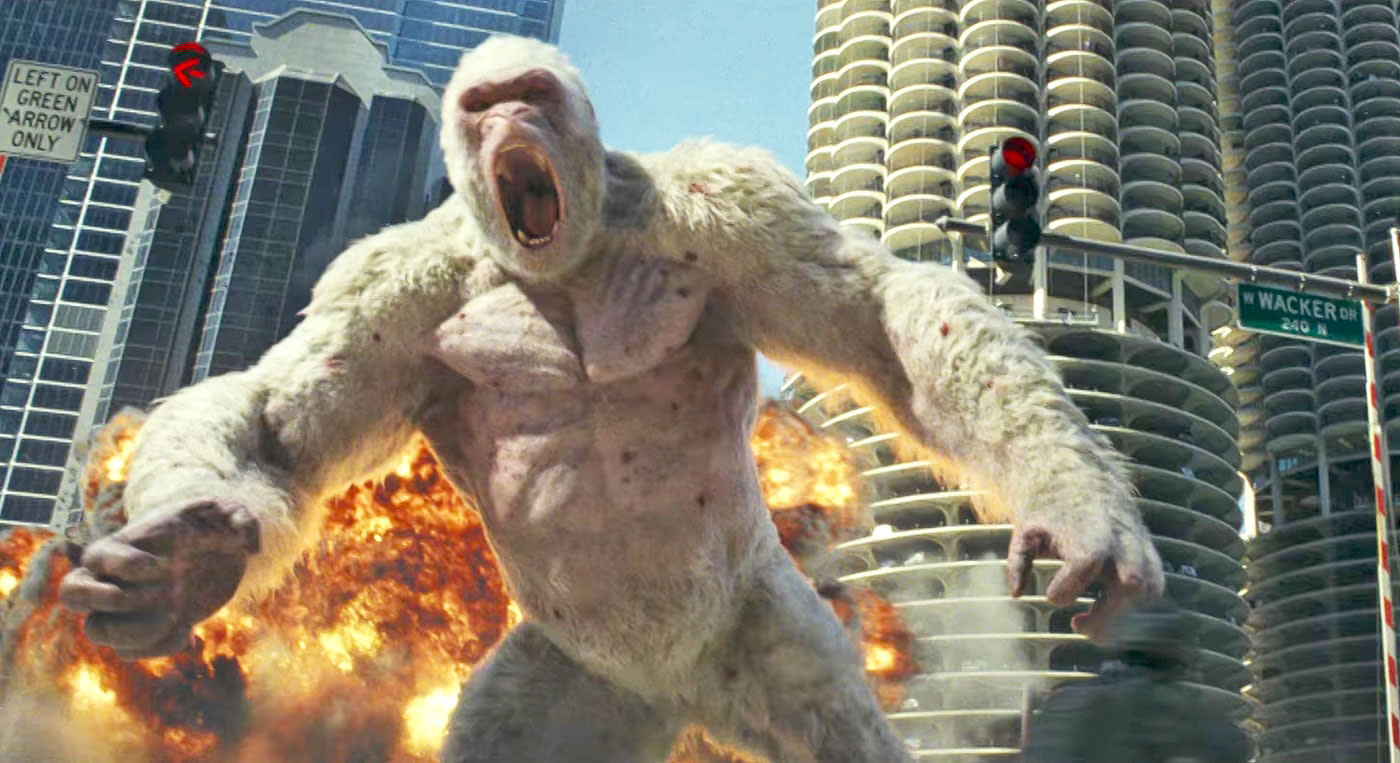 After years of chatter, we're finally getting a look at the movie adaptation of the classic arcade game Rampage. It stars Dwayne "The Rock" Johnson, Jeffrey Dean Morgan (!!!) and Naomie Harris. The project was announced way back in 2011 and Johnson signed on in 2015, but this is our first glimpse at it. It looks like... about what you'd expect from a movie about a trio of overgrown monsters destroying major cities, and is helmed by San Andreas director Brad Peyton.

The hook here is that Johnson's character more or less raised George the gorilla, and then curious as he was, the primate touched a MacGuffin that edited his genes and made him grow. Then, crap gets real and Chicago is left in ruins. If you'll remember, Chicago is the home of Rampage developer Midway, so at least that's fitting. For what it's worth, the trailer isn't terrible aside from the awful remix of Smashing Pumpkins' "Bullet With Butterfly Wings." The Pumpkins also call Chicago home. The movie looks like it's taking itself a little too seriously, but this could've been a whole lot worse. Cough, Pixels, cough. Peep it for yourself below.

Johnson has a long history with video games. He helped Microsoft unveil the original Xbox at CES in 2001, for instance, and has since starred in a movie adaptation of Doom. Oh, and he's also in next month's Jumanji reboot which takes a lot of cues from the Atari classic, Pitfall!. This doesn't look he'll have to stretch his acting chops, but at least it isn't overly offensive. That's really the best we can hope for at this point.

In this article: av, bradpeyton, chicago, dwaynetherockjohnson, entertainment, gaming, jeffreydeanmorgan, midway, movie, movies, naomieharris, rampage, smashingpumpkins, therock, trailer, videogamemovies
All products recommended by Engadget are selected by our editorial team, independent of our parent company. Some of our stories include affiliate links. If you buy something through one of these links, we may earn an affiliate commission.