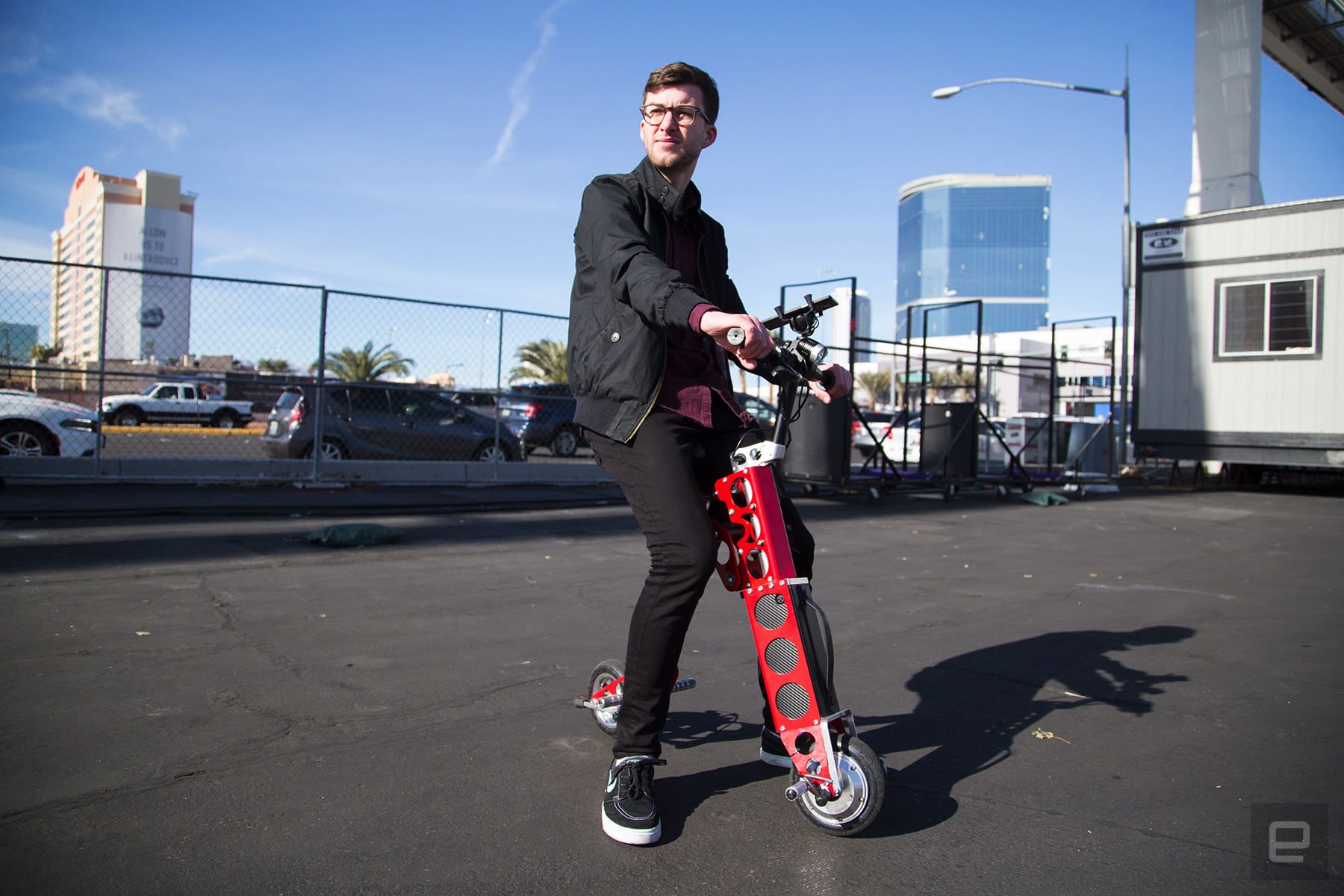 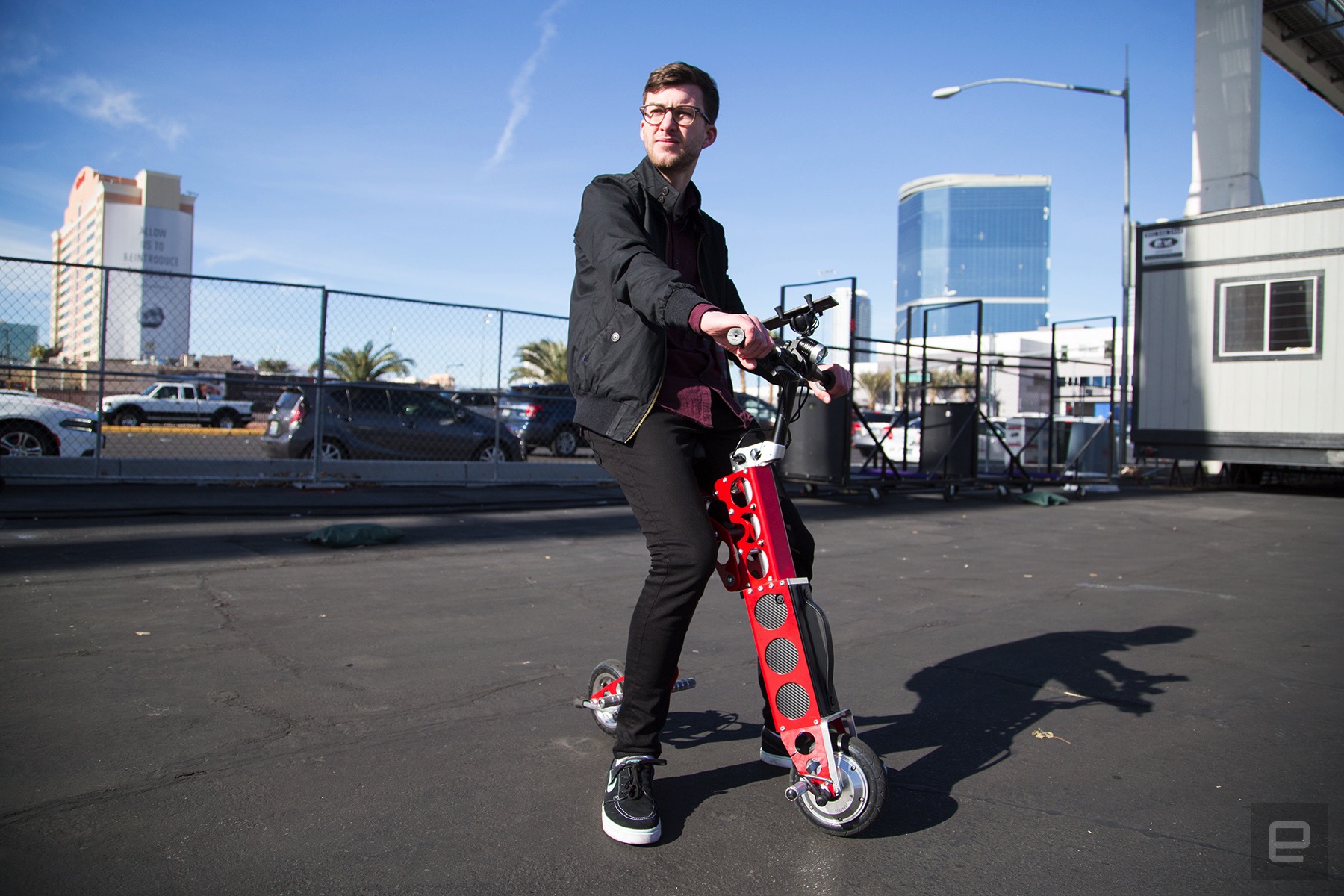 Electric vehicles are a huge part of CES this year. From the Honda NueV to the Faraday Future FF91, everyone's attention is laser-focused on gas-guzzler replacements. Although these are exciting, for me they pale in comparison to another smaller form of transportation: rideables. Spanning skateboards, scooters and bikes, these little machines are perfect for a city-dweller such as myself. With a camera in hand, I've been scouring the show trying to find the very best. My mission: Find my dream rideable.

First up was the Onewheel+. Its creator, Future Motion, is no newcomer to CES, having unveiled its first prototype at the show in 2014. The company has come a long way since then, fine-tuning the design with its first production model 12 months later. Now it's back with the Onewheel+, a souped-up version with a revamped motor and deck design. The underlying concept is unchanged, however: a single tire sits in the middle, while two wooden panels -- similar to the nose and tail of a skateboard -- rest at the front and back. You stand sideways and lean on the nose, which hides a pressure sensor, to push the strange contraption forward.

The experience is exhilarating. The first time I stepped on, I just couldn't find my balance. It's like learning a bicycle: When you're starting out, the hardest part is taking off and stopping. Once you have some forward momentum it's monumentally simpler to stay upright and change direction. Turning is another matter entirely, however. You need to push down on your toes or heels, just like a skateboard, to start a frontside or backside carve. At first my turns were slow and wide as I struggled to commit and lean into the board. After a few minutes, however, I was snaking around the car park like a pro. (Or rather, not a total newbie.)

I was impressed. I wanted one.

The new motor inside the Onewheel+ offers a smoother and more predictable ride than its predecessor. That's important because you can take this rideable on tracks and other unstable surfaces, thanks to its wide, chunky tire. Rocks and branches will still pose a problem, but it's now easier to avoid them or bounce along with precision. The company's custom "Hypercore" has also increased the wheel's top speed from 15 to 19 miles per hour. Unwanted motor heat is pushed out through the axel, and regenerative braking can recover up to 30 percent of its power output. 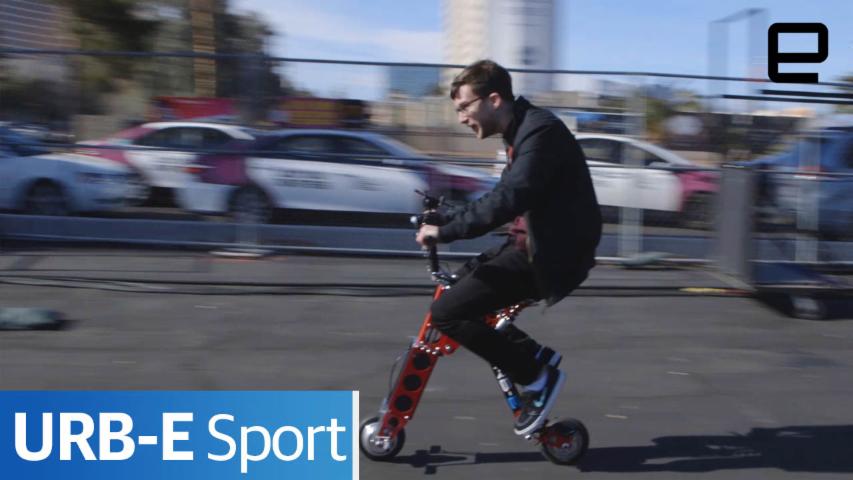 I was impressed. I wanted one. But I couldn't declare Future Motion the winner without knowing what else was out there. My journey led me to the URB-E Sport, a foldable electric vehicle that looks a bit like a scooter. The tiny wheels and stunt pedals certainly give that impression from afar. But there's no deck for your feet to stand on, merely stunt pedals that attach to the bottom of its unusual V-shaped frame. The way it unfolds is reminiscent of a Brompton bicycle, with just a single button that triggers the release. Pop the two handlebars down and you're ready to go.

The original URB-E started as an Indiegogo project in 2014. It was sold as "the ultimate last mile vehicle" with a top speed of 15MPH. While impressive, the $1,500 price-tag meant it was well out of most people's price range. After shipping the first production models in late 2015, the company has returned with a new "Sport" model. The name is a bit misleading, however. It's actually a little slower than its predecessor (the top speed is now 14MPH) and can only hit 16 miles on a single charge. But in exchange, you get a drastically reduced price of $899.

I had a blast nipping around the Engadget trailer, standing up on the pedals and scooting past bemused colleagues.

It was still plenty quick for me, and I was able to ride immediately. You just sit on the saddle, engage the motor and twist the throttle like a motorcycle -- it's really that simple. I had a blast nipping around the Engadget trailer, standing up on the pedals and scooting past bemused colleagues. While there are some advanced maneuvers, including one where you engage the throttle, plant your foot and quickly turn on a dime, I felt like I had mastered the Sport within a few minutes. It was still fun to use, but I missed the sense of skill and progression offered by the Onewheel+. 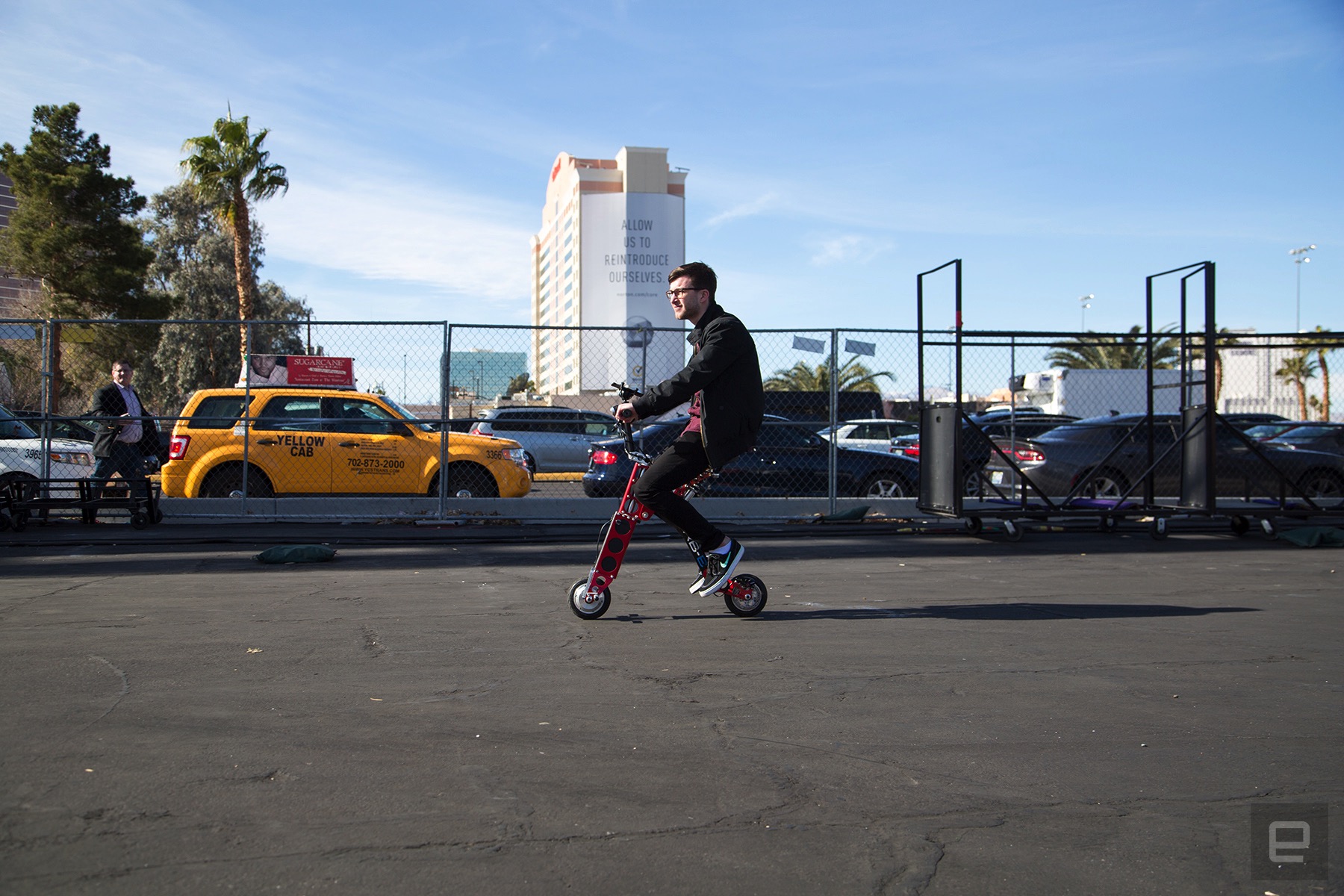 That's not to say the URB-E Sport doesn't have its perks. A nice saddle and pushrod suspension system should make it comfortable for longer stretches than the Onewheel+. In a first for the company, you can also take the battery out and use it to charge other devices. The removable "Eddy" power pack, named after Thomas Edison, has four USB 2.0 ports and one USB-C socket, and can charge an iPhone 40 times over before running out of juice. Of course, that doesn't take into account the charge you'll need to ride the URB-E Sport to your final destination. It weighs 30 pounds, so you don't want to get stuck in the middle of the city with no juice.

I left the URB-E Sport behind feeling a tad conflicted. It was zippy and practical, but I missed the adrenaline rush I had experienced with the Onewheel+. I wanted something that could sit somewhere in the middle, providing speed and flexible, expressive riding in a somewhat sensible form factor. Determined to succeed, I made an appointment with Ben Forman, a mechanical engineer and founder of ZBoard. His company has been working on the ZBoard 2 electric skateboard for almost two years now. With $900,000 in Indiegogo funding, the team has produced multiple versions and tested them with its most passionate backers. 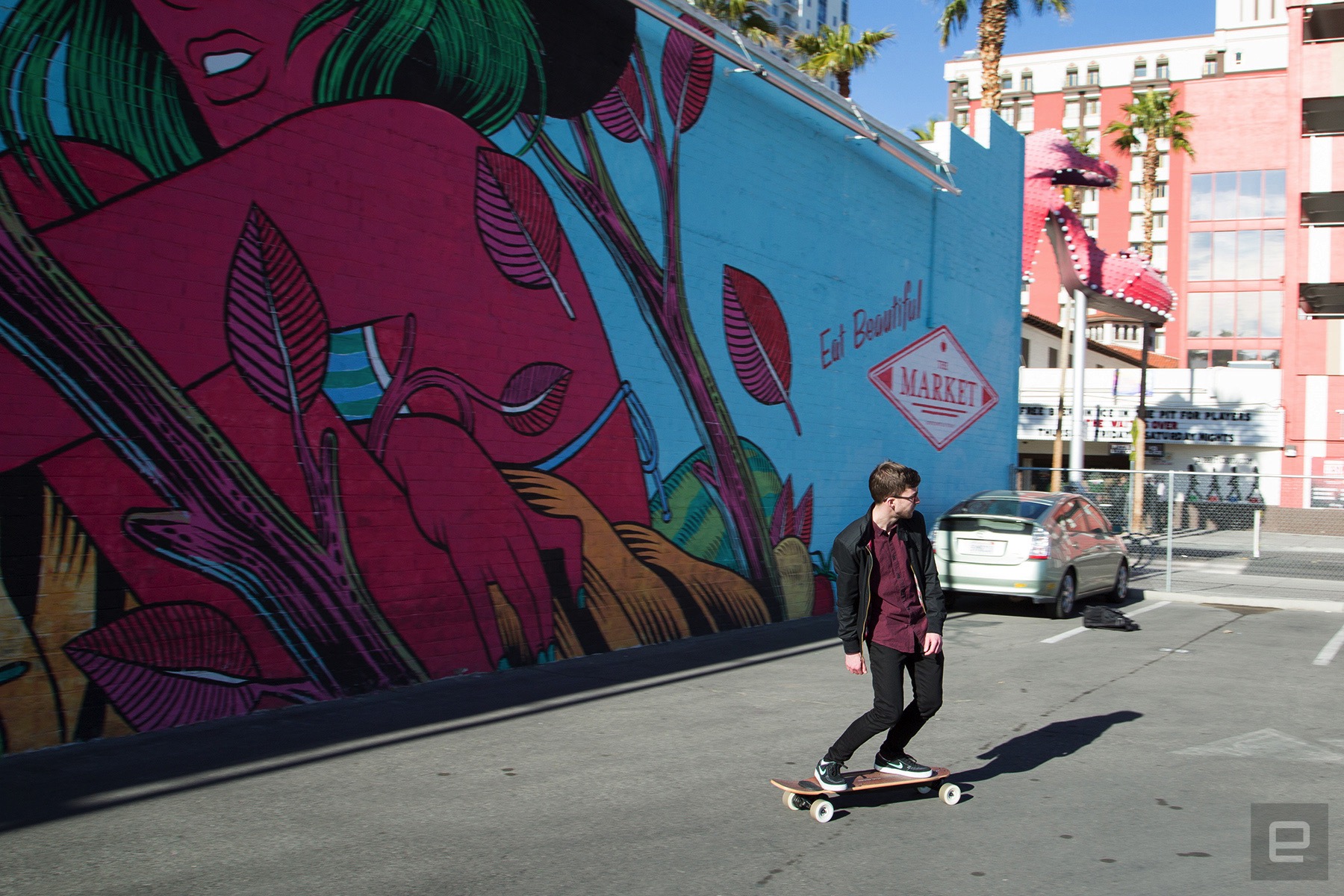 Now, Forman has a board that he's confident will be the final model. It comes in two versions, Blue and Pearl, which will retail for $1,299 and $1,499 respectively. Both have a top speed of 20MPH, but the similarities end there. The Blue has a range of 16 miles while the Pearl can hit roughly 24 before needing a top-up. However, that added endurance means the Pearl weighs a little more and takes four and a half hours to charge. You also get a darker rosewood deck, rather than the Blue's Canadian maple, and a wider set of wheels that can better absorb the impact when you hit bumps in the sidewalk.

There are many electric skateboards (hello, Boosted) but the ZBoard is unusual because it doesn't require a handheld controller. Normally, a rider needs this to accelerate, check their battery and switch between modes. Not so with the ZBoard 2, which uses pressure-sensitive footpads instead. Leaning on the front sensor will cause you to accelerate, while hammering the back one brings you to a stop. Each pad has a sweet spot and it took me a while to understand how I should be standing and pressing with the balls of my feet. Gliding around a half-empty car park, I would find myself struggling to move forward, only to suddenly lurch into top gear. 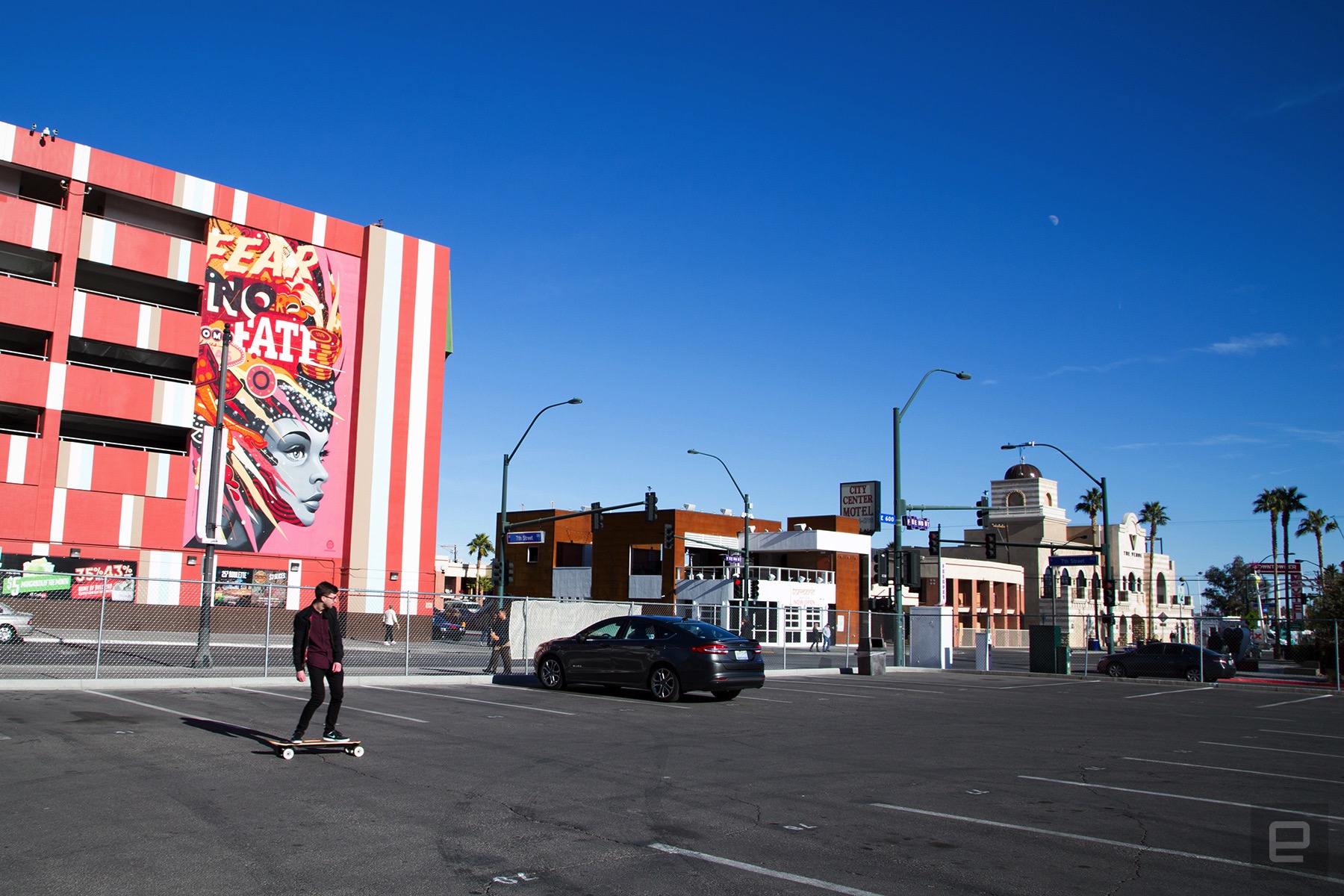 After five minutes, however, Forman declared that I was ready for the streets. (Gulp.) We both ventured out on our Zboard 2s and cruised around some of the quieter roads near Downtown Container Park. At first I was nervous, but the sensation quickly gave way to joy. The ZBoard's acceleration is wild, especially when you ramp it up to the higher "expert" and "ludicrous" modes. We were flying (within the speed limit, of course), creating long, arching turns when the opportunity arose. I've always been a fan of board sports, so this feeling of joy didn't come as a great surprise.

If I had the money, I would gladly own them all. But as I waved goodbye to Forman, I knew my quest had come to an end. Of all the rideables that were shown at CES this year, the ZBoard 2 Pearl was my favorite. It's fast, maneuverable and, just like surfing or longboarding, gives you a chance to express yourself while riding. You can keep your Toyota Concept-i and Chrysler Portal. There's only one electric vehicle for me, and it doesn't need an AI assistant, selfie cam or autonomous driving mode to impress.

In this article: ces2017, electricvehicle, ev, gear, onewheel, onewheel+, onewheelplus, skateboard, transportation, urb-e, urb-esport, urbe, urbesport, video, zboard, zboard2
All products recommended by Engadget are selected by our editorial team, independent of our parent company. Some of our stories include affiliate links. If you buy something through one of these links, we may earn an affiliate commission.