Nomiku debuted nearly five years ago with an innovative idea: affordable sous vide cooking in your own home. Back then, machines that did sous vide -- a way of cooking vacuum-packed foods in a temperature-controlled water bath -- was still a fairly new concept. In 2012, Nomiku launched a successful Kickstarter for its first immersion circulator (raising $586,061 in 30 days) and has since made a WiFi version that you control with your smartphone. Today the company is ready to announce yet another sous vide machine, but with a twist: It comes with a food program that sends you precooked frozen meals.

The new machine is called the Nomiku Sous Chef, and the food program is called Nomiku Sous Chef Meals. The exterior of the Sous Chef looks identical to that of the original WiFi Nomiku, with a temperature dial and a touchscreen display on the front. The big difference is its interior; it has a whole new logic board, along with a new RFID reader that is designed to work with the frozen meal packages. Simply wave the RFID label on the package over the front of the machine and it will automatically detect what meal it is.

Drop it in the water and the heating algorithm will kick in; instead of a specific temperature, it adjusts the heat according to the food and the number of packets. Wait approximately 30 minutes and voilà: Your meal is done. You'll even get an app notification that your food is ready. "You're heating it up to a precise temperature," CEO Lisa Q. Fetterman tells Engadget. "This is the way Michelin star chefs heat up their food." You can even leave it in for a day and it'll still be warm. Think of it as a microwavable meal, but way fancier. 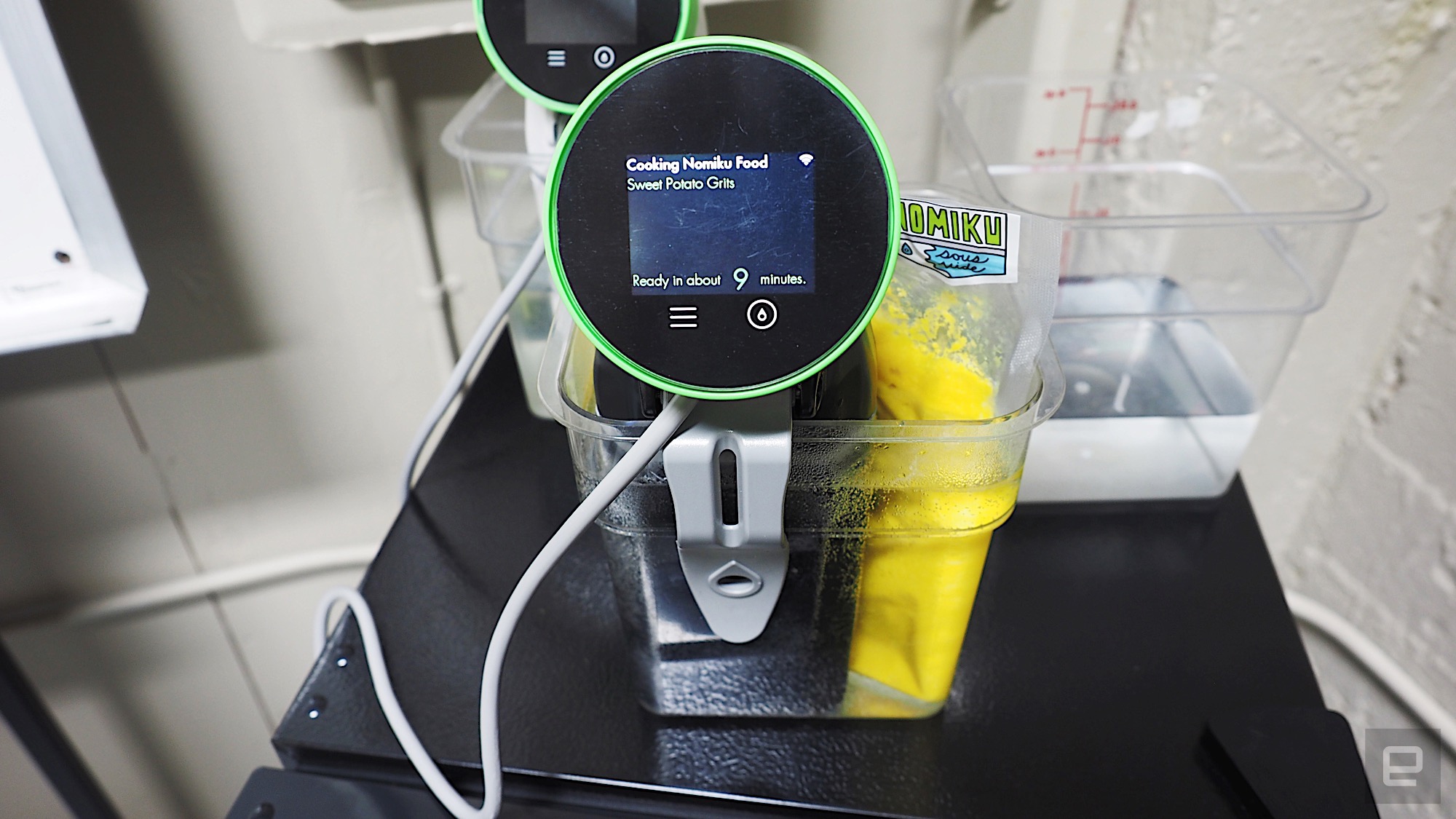 The Nomiku Sous Chef will sell for $149, and in order to get it, you need to buy into the food program, too. Entrees are priced around $8 to $14, while side dishes cost around $4 to $6, and you can mix and match them to your liking. The meals can be tailored to a variety of dietary preferences, like vegan, gluten-free and paleo. Some sample menu items include sweet potato grits, chickpea masala and pork shoulder with chipotle. You need to order $80 worth of meals in order to qualify for free shipping.

Unlike other food subscriptions on the market, like Freshly and Sprig, Nomiku doesn't bill you weekly or monthly. Instead, the machine keeps track of your inventory (since you're using RFID to scan it) and will automatically replenish your default order once you're down to your last four packages of food. This way, you can go for weeks without using the frozen meals and you won't get charged or have to store extra food. If you don't want the automatic reorder for whatever reason, you have 24 hours to cancel or modify it.

And here's the kicker: After you purchase about $300 worth of food (that's roughly 20 meals), Nomiku will credit you $149, which essentially makes the machine free. If you want, you can also cancel the food program at any time. Even without it, the Sous Chef still works as a regular sous vide machine, which is more than you can say for a Keurig (which won't work without those pods) or a Juicero (which works only with those produce packs). 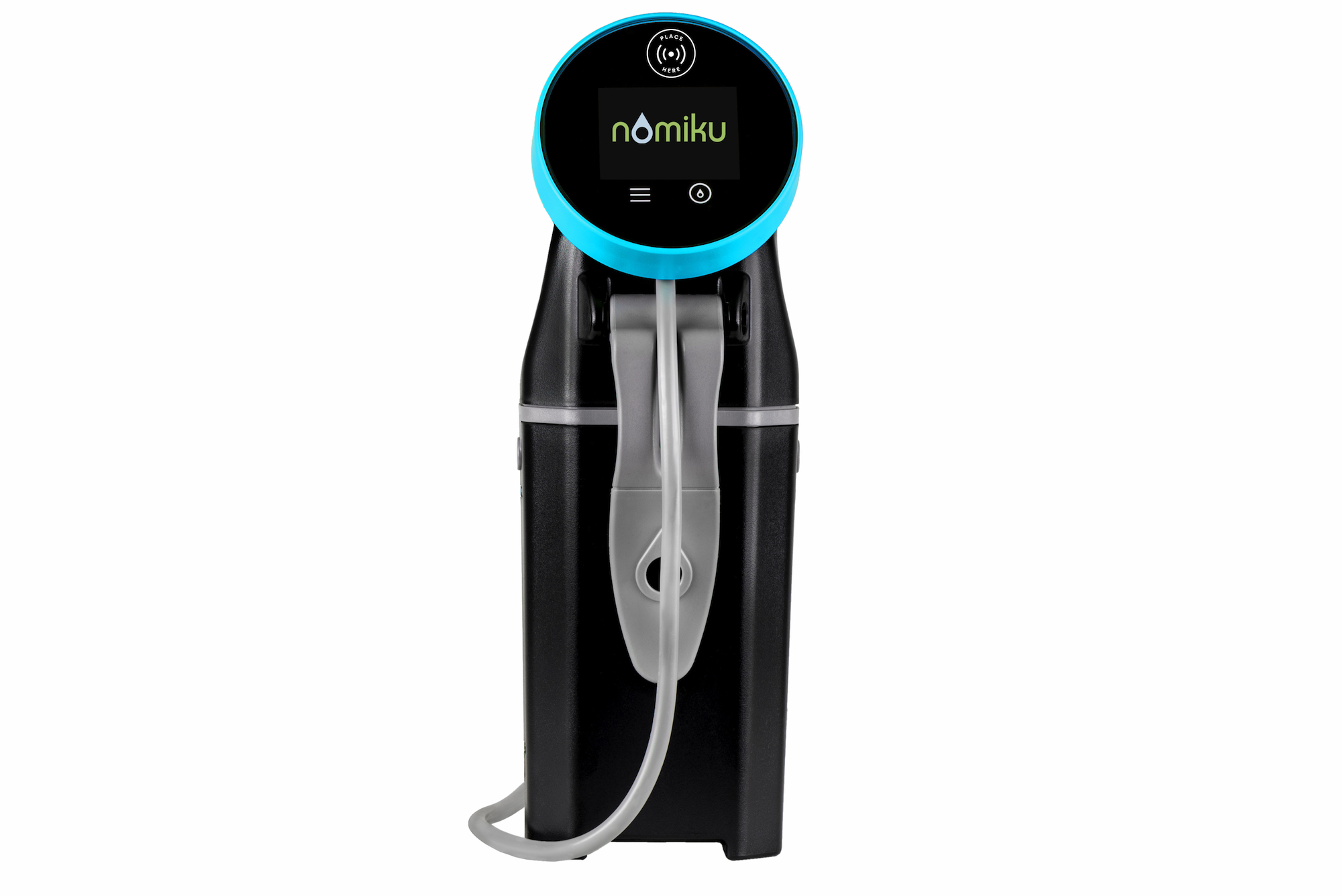 Oh, and if you already bought a WiFi Nomiku in the past six months and you're feeling a little bit of buyer's remorse, Nomiku has a trade-in program that lets you swap your old one with the new model at no charge. Anything older and you're out of luck, but since the Sous Chef is "free," it's not such a bad deal regardless.

I tried out a prototype version of the Sous Chef at Nomiku's office in San Francisco last week, and it works as promised. Fetterman scanned a bag of sweet potato grits with the RFID reader, and the machine immediately recognized it, showing the name of the meal on the display. The Sous Chef was already attached to a container of water, so she just dropped the packet in and the machine started to heat it up. In 30 minutes, we took the packet out, cut it open and poured the grits into a waiting bowl. It was delicious.

Still, there are a few downsides. For one thing, you can't get the Sous Chef and the food program separately; in order to get one, you need to buy into the other. You can cancel the food program afterward, of course, but you do need to order at least the initial batch to get the machine.

Additionally, if you already own a rival sous vide machine (say an Anova or a Joule), you won't be able to participate in the food program by itself. Of course, you'd probably want to use the food packets with the new Sous Chef anyway, because of the RFID and its unique heating algorithm. But as an existing sous vide user, I would have preferred the flexibility of a stand-alone food program. If you want your frozen food to replace microwavable meals, then it should be able to work with all sous vide machines, not just one. 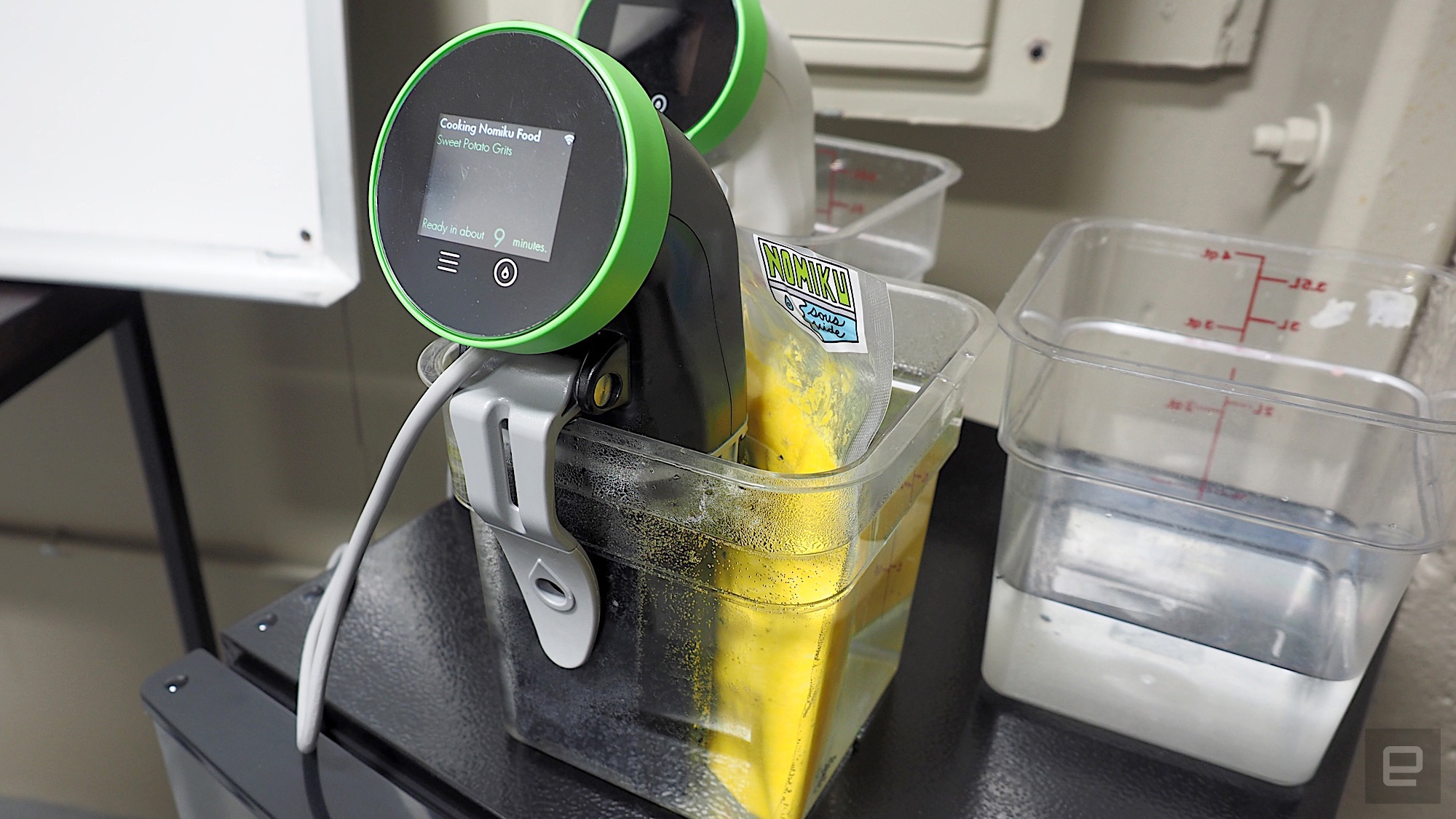 Interestingly, the machine and the meals are all developed and made in California. Indeed, Fetterman tells me that the Sous Chef is the first of Nomiku's devices that was made from start to finish in the US. The food was created and developed by an in-house chef and is made and packed in a USDA- and FDA-certified facility. All of the ingredients are sourced from local farms.

But why not just use a microwave? "Microwaved food tastes awful!" Fetterman said. "The reason they do is because of the uneven heating. And there's no appliance that is better at reheating than a sous vide machine, because of the precise temperatures."

Still, Fetterman knows that the convenience of using a microwave is pretty attractive. That's one of the reasons she developed the food program. "What made the microwave take off in the '70s was microwaved meals, because at last, there was a definite use case," he said. "Reheating is a concept that everyone is now aware of. Now, we want to make it not suck. We want food to taste delicious." Sure, it'll take half an hour instead of the five or so minutes that a microwave might, but the food will taste better. 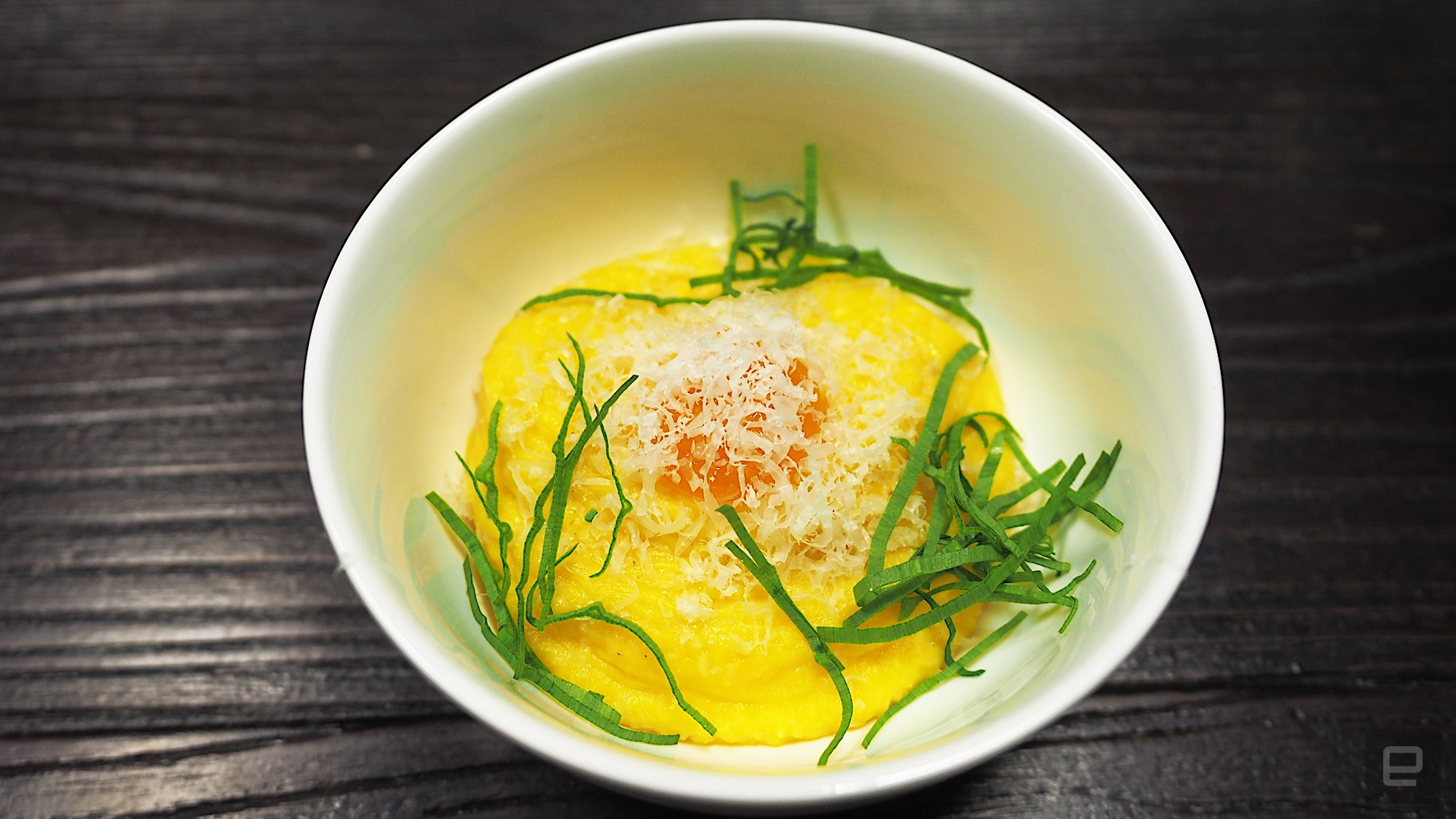 Fetterman likens the Nomiku Sous Chef and the accompanying meal program to how Apple revolutionized the MP3 industry. It existed before the iPod came along, but what Apple did was tie it into the iTunes ecosystem. All of a sudden, if you wanted to use iTunes or buy music from the store, it was just easier to use the iPod too. "We want to be the iTunes for your mouth," laughs Fetterman.

The Sous Chef Meals program will be available only in California to start, with a nationwide rollout planned for later this year. It sounds like a pretty good deal, but Nomiku does have its work cut out for it with the other food delivery options on the market. It's still a lot easier to order food on Grubhub or Seamless, and the microwave will probably reign supreme for a long while. But if you don't feel like cooking -- which meal kit services like Blue Apron and Hello Fresh will still have you do -- and you want healthy, good-for-you food that actually tastes good, then Nomiku's Sous Chef could be the solution.

"Our tagline is 'Food Tech for People Who Love to Eat,'" Fetterman said. "I want to eradicate every obstacle between you and a delicious plate of food."

In this article: food, food and drink, food-and-drink, foodanddrink, gadgetry, gadgets, gear, hands-on, home, nomiku, nomikusouschef, nomikusouschefmeals, sousvide
All products recommended by Engadget are selected by our editorial team, independent of our parent company. Some of our stories include affiliate links. If you buy something through one of these links, we may earn an affiliate commission.