The rule is that if you want the hybrid version of a car, you have to shell out more cash. Maybe tax credits would cover the difference, but usually not. Then, you have to figure out if the money you save on gas -- after a few years of diligent driving -- would bridge the gap. But, if you're in the market for a luxury sedan, BMW no longer asks you to make the decision based on your bank account.

The BMW 530e hybrid luxury sedan is the same price as its all-gas counterpart, the 530i. Both start at $52,400. That's a big deal. This is the turning point in the evolution of electric cars where customers are no longer forced to debate the merits of being green (well, greener) against saving cash. But it's not just the price that's the same, on the surface you'd be hard-pressed to find the differences between the two cars.

Both cars push out 248 horsepower, although the 530e distributes it over the gas engine and the electric motor (137 and 111 respectively). They both look the same inside and out, save for an eDrive badge and charging port. Both are rear-wheel drive. Both can be outfitted to be all-wheel drive. The options list is nearly identical and when you're sitting in the car, both feel like a BMW -- with all the luxury and technology that entails. 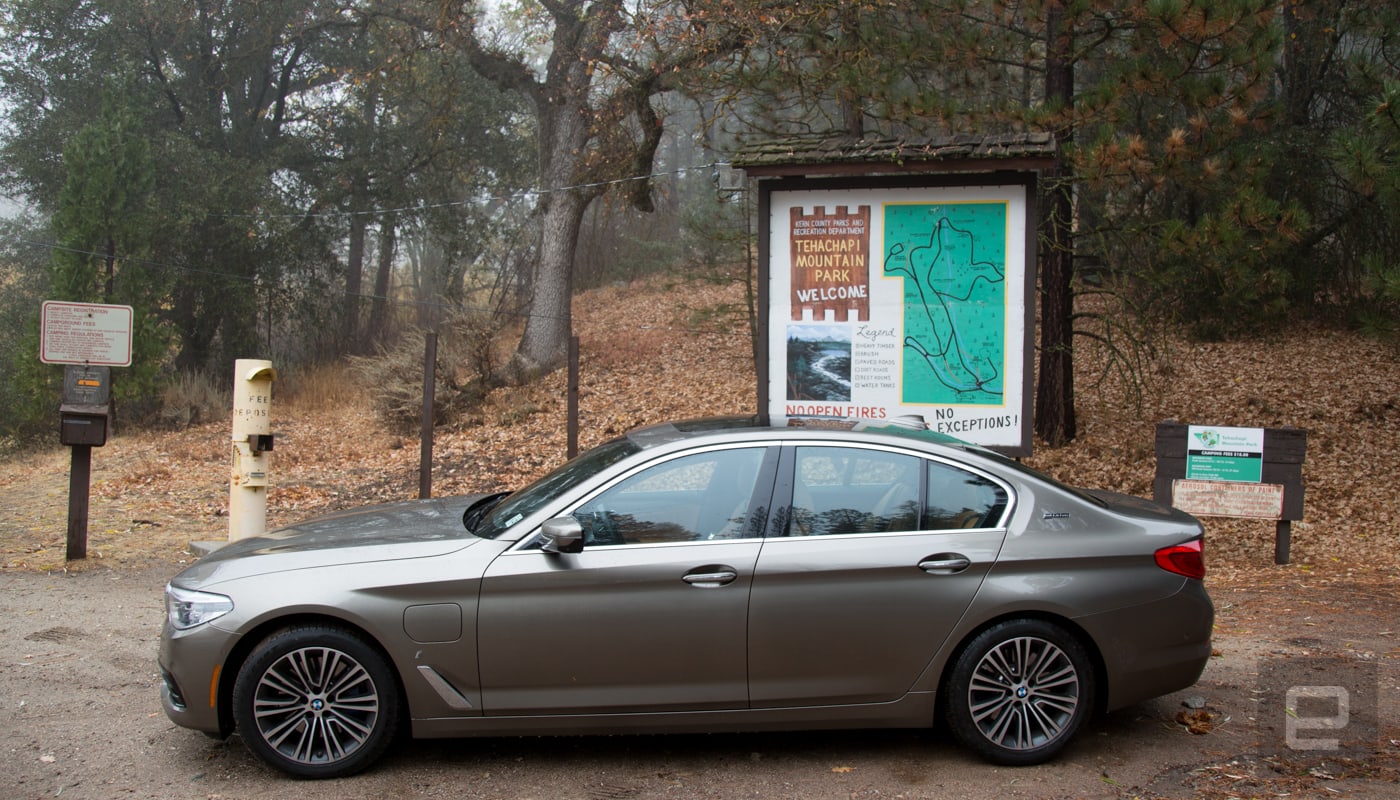 For anyone looking at both these models the question now is: Who do you want to be behind the wheel? If the answer is "someone that saves some cash while doing a small part to reduce pollution spewed by your vehicle," the 530e is the simple choice. That said, even though the cars are similar, there are some important differences.

The extra torque (310 foot-pounds versus 258) gives the -- albeit heavier -- hybrid version a bit more umph. Plus, the instant acceleration of the electric motor pushes the car forward at stops while the gas engine restarts. If you've ever turned off your car's "auto-off at stops" function, you'll be pleasantly surprised at how nice it is having that EV system available off the line with the starter kicks in.

On the efficiency -- and ultimately, cash-saving front -- the 530e's EPA-rated high-end of 72 miles per gallon equivalent dusts the 530i's 27 miles per gallon. My tests in San Francisco and surrounding Bay Area yielded mid to high 50s while driving in economy mode. During extended highway driving that dropped to the mid 30s and low 40s. But there was an unexpected issue during the road trip. 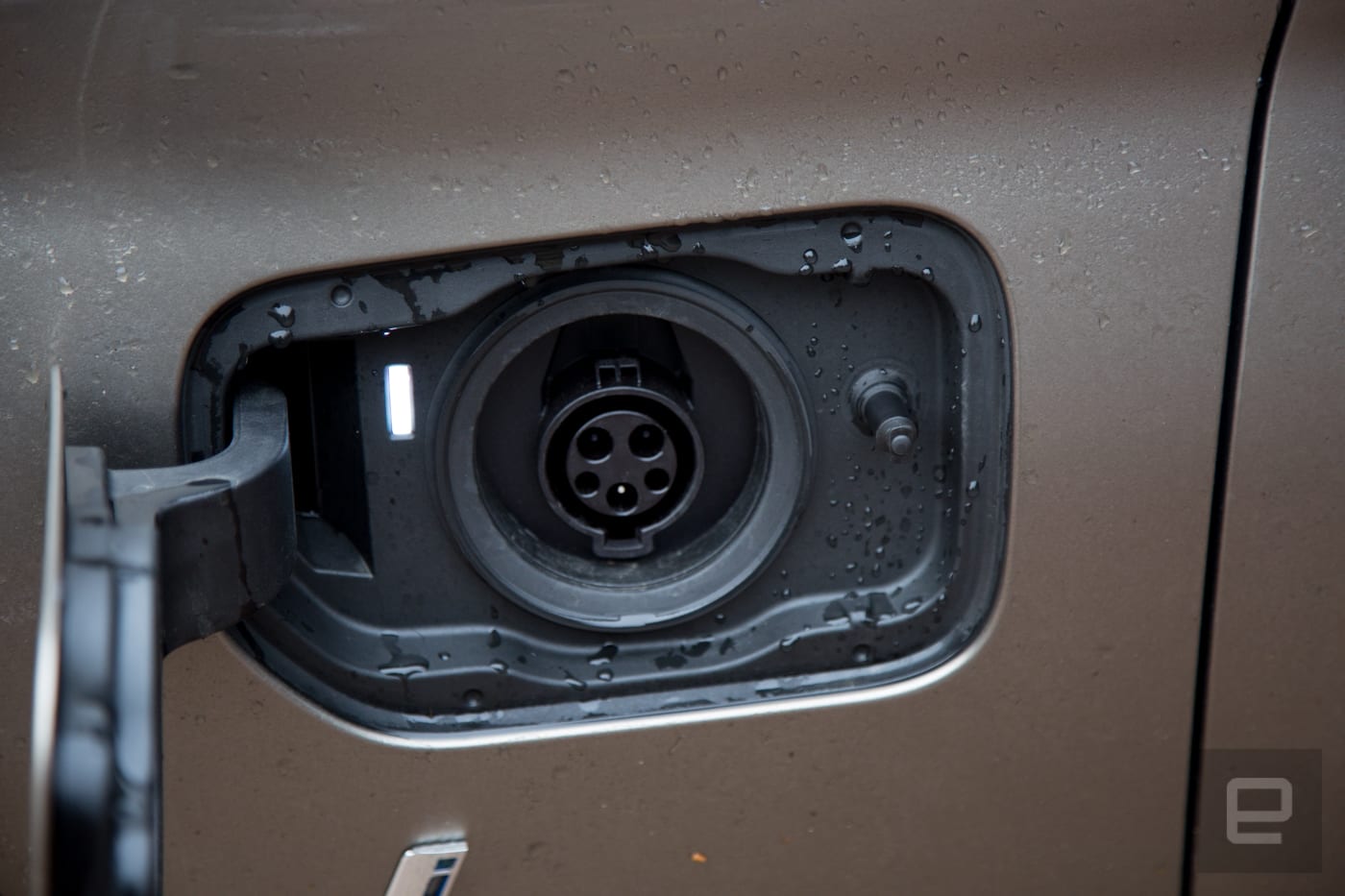 The 530e's tank is only 12.1 gallons (you have to put that 9.2 kWh battery somewhere). Meanwhile, the 530i comes equipped with an 18-gallon tank. That's a range difference of 116 miles, which means extra stops to fill up. If you're constantly taking long road trips, that might become a problem.

For running errands and city commutes, the 530e's pure electric mode reminds you why you wanted a plug-in hybrid in the first place. With a range of about 19 miles on a full charge, I was able to drive to and from work (11 miles, round trip) plus various pit stops with no problem. With the hilly terrain of San Francisco, I was able to eek out about 16 miles total. In less challenging areas, that rose to 18 miles. Once I even managed 24 miles, but that required a ton of effort to reduce power consumption -- something I'd never actually do in real life. Still, with an overnight charge of the car, I could reduce my trips to the gas station substantially.

Of course, I would be driving by gas stations in the luxury of a 5 Series BMW, which tells the world, "sure I want to save the planet a bit, but I also like feeling pampered." The 530e doesn't skimp on any of the luxury you expect from the German automaker. The interior is well designed and the Fineline Ridge wood trim makes it feel more like a log cabin than a gaudy condo. It has seating for five, but if the front passengers are tall, those in the back will notice the lack of legroom. The trunk has more than enough room for an eight-bag grocery run, a pair of golf clubs, or a small bookshelf from Ikea. 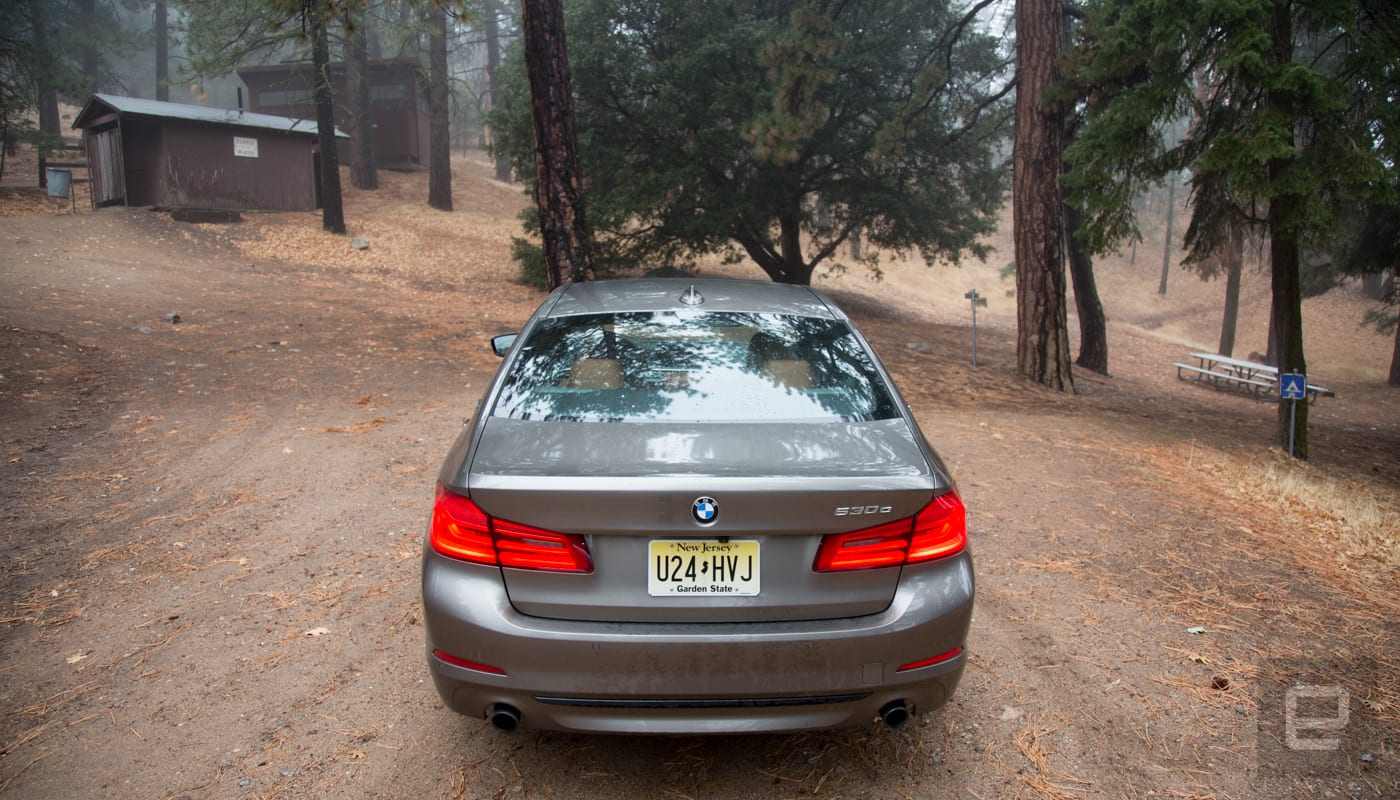 On the tech front, BMW's iDrive infotainment system is still one of the best in the automotive world. Even though the 10.2-inch display is a touchscreen, the round controller and seven keys situated behind the shifter were my go-to means of control. BMW offers CarPlay support, but it's a $300 option, which seems ridiculous considering how many cars have it as standard. Even without it, I had no problem navigating with the vehicle's mapping system or listening to music from my iPhone.

Behind the wheel, the car delivers on BMW's reputation of sporty luxury vehicles. The 530e is 500 pounds heavier than the 530i, but that battery lowers the center of gravity, making the car sure-footed on mountain road switchbacks with power to spare to accelerate on the straights. The 5 Series has grown in stature over the past few generations and you do notice it, but it never felt like the heft of the vehicle was getting in the way of performance.

On the highway, the semi-autonomous lane-keep assist and adaptive cruise control were solid performers. The system's not as nice as Tesla's Autopilot or Cadillac's Super Cruise, but in stop-and-go gridlock or during long jaunts on boring freeways, the Driving Assistance package is worth the $1,700 it'll set you back when you purchase the car.

When you factor in the $4,668 tax credit available to 530e buyers, the Driving Assistance package is actually not that bad of an investment. In fact, the 530e (with that tax credit) is actually cheaper than its gas counterpart. Of course, those credits could go away pending tax bills working their way through the government, but for now, it's a nice thank you for reducing the amount of gas you use every year. 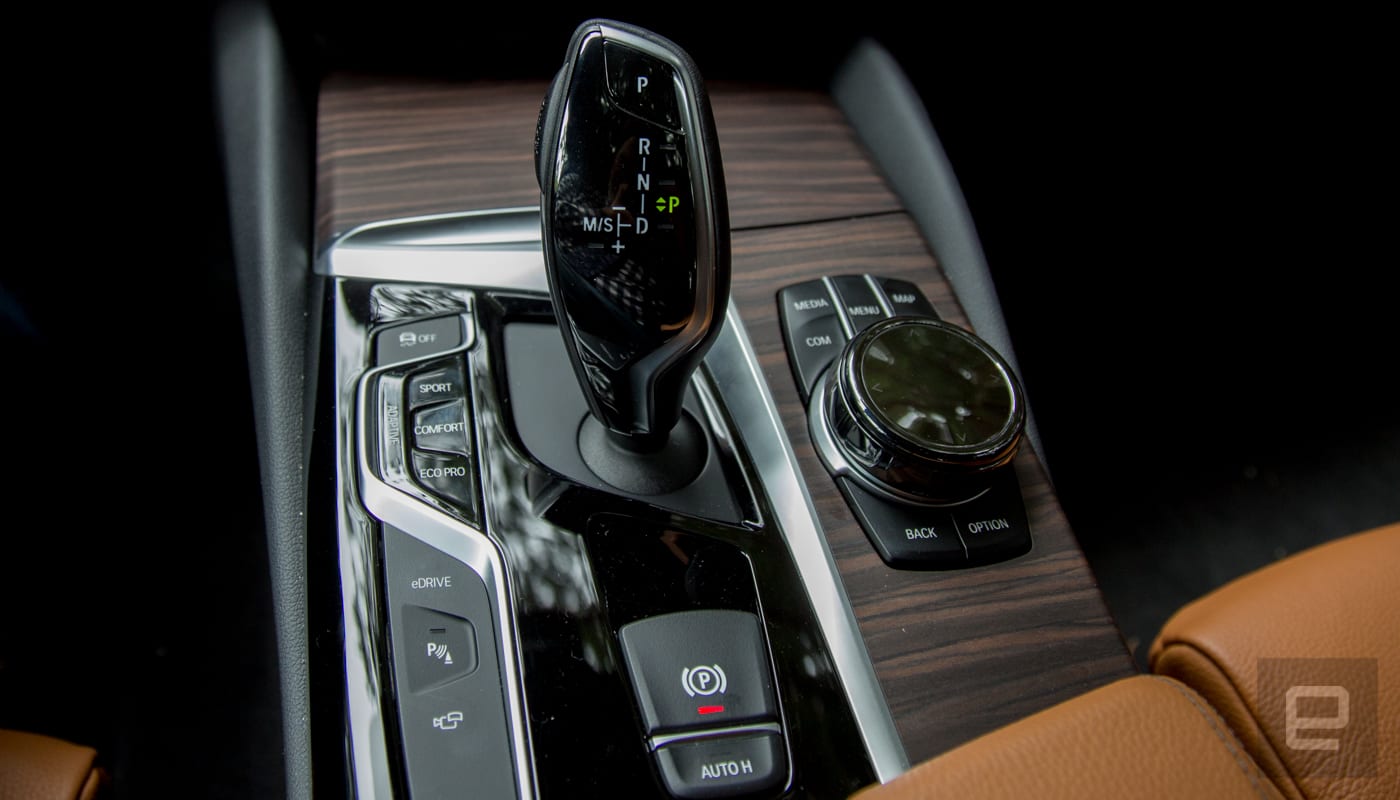 Sadly, the coolest feature of the 530e isn't even available yet: the wireless charging pad. Drivers just pull their vehicle up over the device and it refills the battery without plugging in -- it uses inductive charging via magnetic coils to generate energy. The pad will be available in Europe in 2018 and in the United States once it passes regulatory tests.

Even without the wireless charging pad, the BMW 530e is an outstanding luxury hybrid. As a BMW it delivers all the performance and luxury expected from the brand. As a hybrid, it seamless switches between gas and electric without the driver knowing, all while offering up a nearly 20-mile range pure electric mode. The fact that it's the same price as its gas-only counterpart is more than icing on the cake -- it's the first step in reducing the gap between these two types of cars. While not all of us (myself included) can afford a 5 Series BMW, it's good to know that true choice, without the financial concerns between hybrid and gas cars, is coming to more affordable vehicles. If they're all as great as the 530e, the decision is going to be simple.

In this article: 530e, 530i, 5series, BMW, ElectricVehicle, gadgetry, gadgets, gear, green, hybrid, transportation, video
All products recommended by Engadget are selected by our editorial team, independent of our parent company. Some of our stories include affiliate links. If you buy something through one of these links, we may earn an affiliate commission.