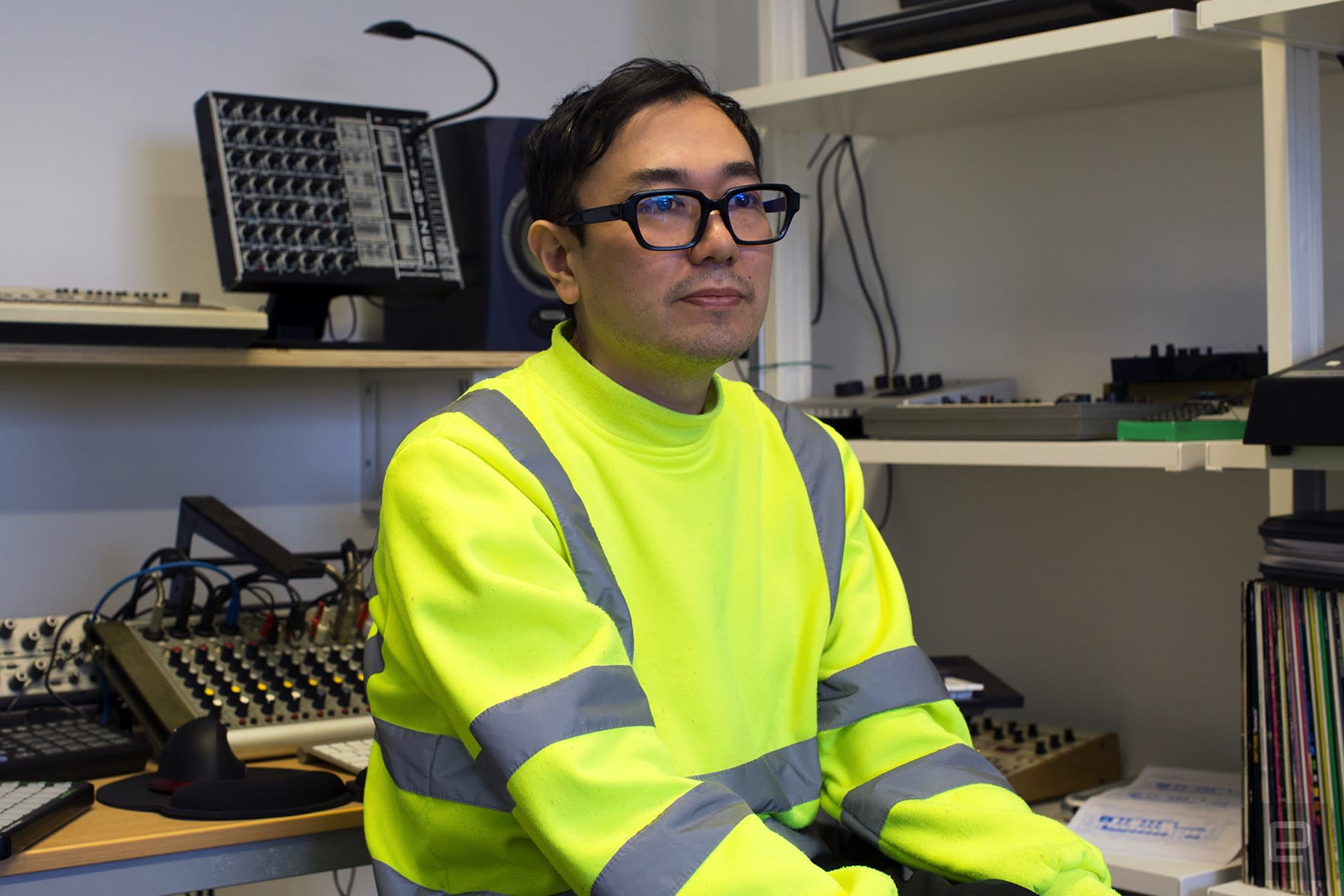 Yuri Suzuki mimics 'The Sound of the Waves' with surf data

Yuri Suzuki was hunched over a MacBook Air with a "Fuck Brexit" sticker on the lid. He opened Magicseaweed, an ocean-monitoring website for surfers, and searched for a few spots along Spain's northern coast. "It's quite amazing to see the super-precise data we can get," he muttered, turning the screen toward me. I nodded as the sound artist, designer and musician scrolled past endless tables listing hourly wave height and speed, wind and temperature conditions. These numbers, he explained, weren't holiday research but the secret behind his latest and most ambitious art installation, The Sound of the Waves.

Gallery: The Sound of The Waves | 15 Photos

You can find the project inside London's Stanley Picker Gallery, a few hundred yards from the Kingston School of Art. In a white, high-ceilinged room, 11 motorized rain sticks stand on camera tripods, rotating at a seemingly random rhythm. Sometimes, they move as a group, but usually one or two shift while the others stand still. When they tilt, a collection of beads cascade through their cylindrical innards, mimicking the sound of the ocean lapping against the shore. It's a calming experience that encourages you to close your eyes and visualize the White Cliffs of Dover, or the glassy waters surrounding the Great Barrier Reef in Australia.

Every rain stick is connected to a gray box with a Particle Photon kit inside. The so-called Internet of Things hardware can access crowdsourced data directories — in this case, Magicseaweed — over WiFi and relay that information to the stepper motors behind each rain stick. Suzuki uses wave height to dictate how far the instruments rotate and "swell period," the number of seconds between each wave, to decide when they should start moving. The whole experience is on a 10-minute timer: The first half, or "phase," connects all 11 rain sticks to a single, randomly selected beach, while the second half gives them different locations to simulate.

The Sound of the Waves (2018) is a kinetic sound installation constructed from African rain sticks mounted on tripods. Using crowd data that measures wave oscillation from beaches around the world, the information is transmitted live to a computer controlling the tripods. pic.twitter.com/d4PzQOcSAv

Suzuki grew up in Tokyo, the antithesis of quiet Japanese seaside towns like Kamakura and Enoshima. He studied industrial design at Nihon University before joining Japanese art group Maywa Denki, best known for the wonderfully wacky Otamatone instrument. "I never grew up with a seaside city or anything," Suzuki explained, "but at the same time, I've always been really obsessed with soothing sounds." He moved to London in 2005 to study product design at the Royal College of Art under Israeli architect Ron Arad. By 2013, he had taken up a teaching position and created his own studio focused on audio-based research and consultancy.

A year later, the skinny designer created the Ototo synthesizer and musical invention kit. The hand-sized board, crowdfunded on Kickstarter, featured 12 touch-sensitive keys that could be connected to everyday objects with crocodile clips. That meant you could play charming tunes by tapping on fruit, plants and aluminium foil. The machine also had a built-in speaker and four sensors for controlling pitch, volume and the sound's "texture." Suzuki enjoyed the experience but decided he was "more of a designer than a manufacturer." A hardware startup, after all, required a different structure with rigorous retail and marketing strategies. "But it was nice to run [the Kickstarter campaign]," he said. "It was really, really nice." At his office near London Fields, Suzuki explained his long-standing interest in ambient noise and whether it's possible to improve or "redesign" the man-made sounds we encounter every day. Most cities, for instance, are filled with noisy cars and construction sites. People drown them out with noise-cancelling headphones and meditative white noise machines, but these rely on artificial, compressed tracks. It's possible, of course, to improve sound quality with high-end gear and lossless audio formats, but ultimately it's digital imitation. A recording of the rain isn't the same as listening to a thunderstorm against your bedroom window.

Suzuki was inspired by Fallingwater, a house built by famed architect Frank Lloyd Wright in rural Pennsylvania. It sits over a small waterfall that provides a nonstop supply of natural, ambient noise for visitors. At first the sound is hard to ignore, but soon enough it fades into the background like an old piece of furniture. "You totally forget about it," Suzuki said, "and just feel a nice, comfortable environment in there." Of course, in a city like London, it's nearly impossible to build a waterfall in your backyard. And if you want to hear the sea — well, by definition you can't be inland.

Still, Suzuki wanted to build The Sound of the Waves in a domestic setting. He researched the idea and concluded that it was "not really possible" to simulate the intricacies of the ocean with modern algorithms on a computer. Thankfully, he stumbled on Magicseaweed and its extensive database of live and long-range surf reports. The Devon-based company — acquired by rival surf monitoring website Surfline last October — was happy to help with Suzuki's unusual art project. It meant the Japanese designer could track and replicate real-life waves without fully understanding the moon, weather and oceanic currents that control them. 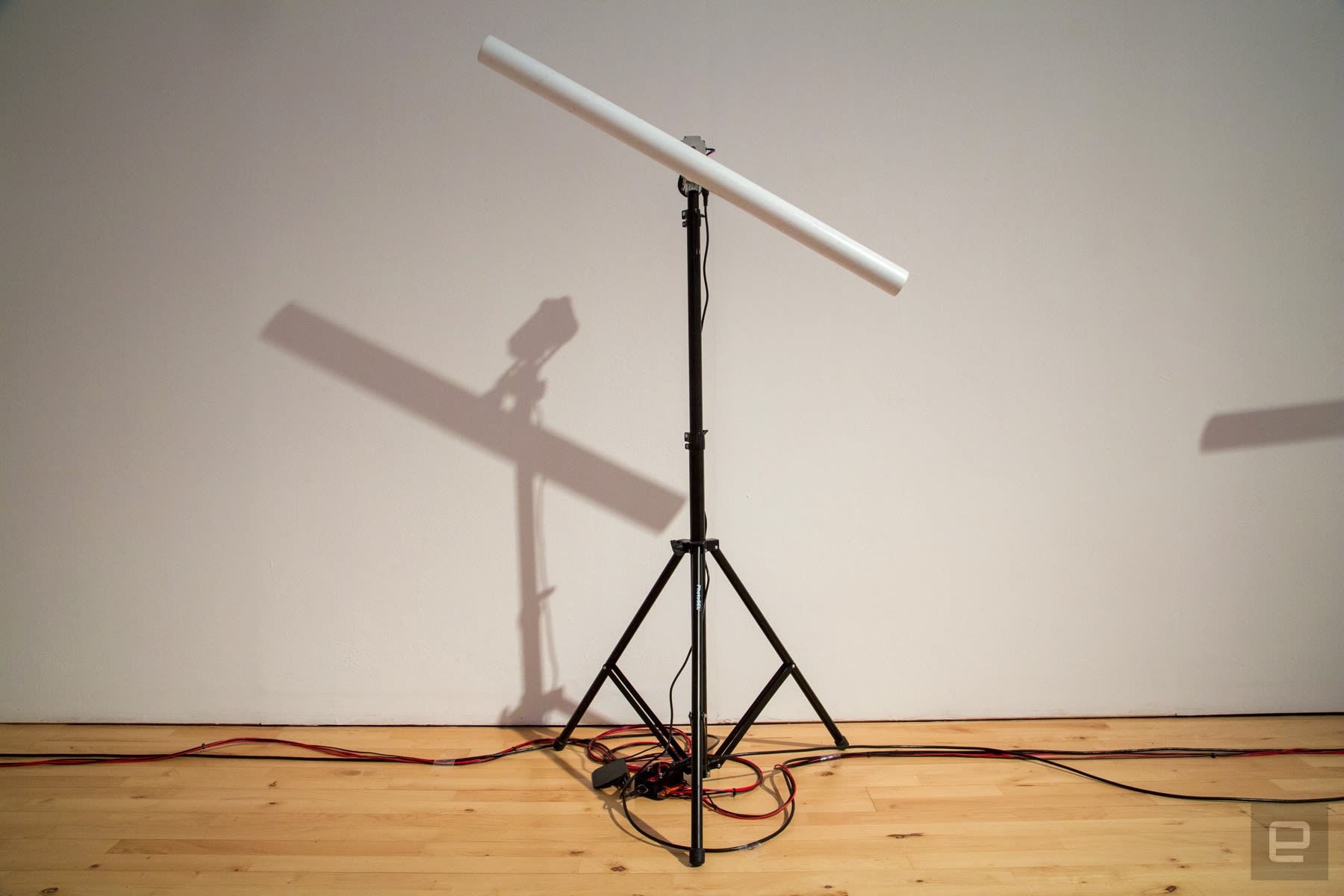 Building The Sound of the Waves wasn't easy, however. In the beginning, Suzuki wanted 12 rain sticks in a clock-like formation. "But we had a bit of a problem with the installation," he admitted, and had to sacrifice one. It was also tricky to find 11 matching rain sticks. Most are hand carved and therefore unique in length, weight and tribal decoration. Suzuki needed a clean, uniform design and searched tirelessly for the right supplier. "Because if each motor had a different weight on it, it would have been a nightmare to control the mechanical design sound [in the room]," he said.

Suzuki plans to increase the number of rain sticks in the future. Ideally, he would like enough instruments to mimic a beach in every country. "I'm really interested in browsing sound from around the world, but in a single place," he explained. It's a concept that Suzuki has explored in previous projects. In 2012, he built a vinyl globe that played eclectic music as the needle passed over different countries. Four years later, he teamed up with Moog on a map-shaped musical synthesizer. Each module, or "country," contained unique sounds that could be blended together with red wires.

Redesigning our society with calmness in mind could help us lead healthier and happier lives.

This concept is secondary, though, to Suzuki's ideas on noise pollution. He's not suggesting that everyone should have The Sound of the Waves in their living rooms. And he's aware that ambient music is an evolving concept; coffee shops, for instance, are a popular workspace that didn't exist 1,000 years ago. Suzuki does, however, want people to think about sound and what they find relaxing. Redesigning our society with calmness in mind — everything from buildings to household appliances — could help us lead healthier and happier lives. It's an abstract idea, but one worth balancing with our insatiable desire for better, more powerful technology.